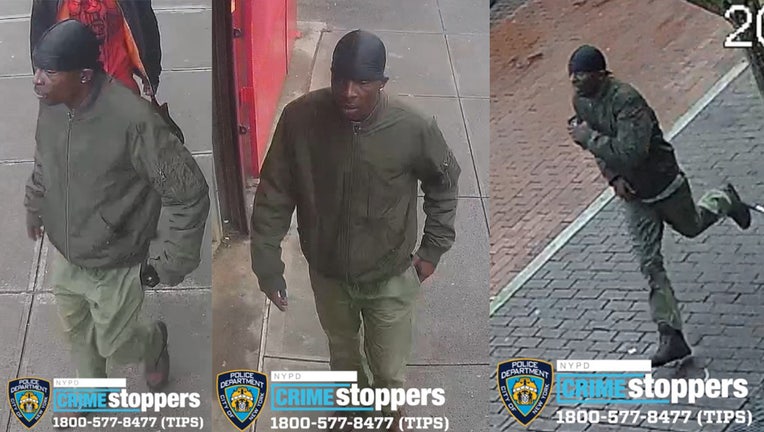 A gunman wanted in connection to a daylight shooting in Queens.

NEW YORK - The NYPD is searching for a gunman they have accused of fatally shooting another man in broad daylight on the street in Queens.

According to authorities, just after noon on Friday, the suspect approached 40-year-old Elgin Reynolds on 165th Street in Jamaica and brandished a firearm.

When Reynolds tried to escape, the gunman opened fire, shooting Reynolds in the leg, torso, and face.

EMS rushed Reynolds to a nearby hospital, where he died.

The gunman fled the scene heading north on 165th Street toward 89th Avenue, where he got into a white sedan.

The suspect is described as a dark-skinned man, roughly 40-45 years old, standing around 6-foot-1, and weighing 180 pounds. He was last seen wearing a green jacket, green pants, brown boots, and a black du-rag.

Anyone with information in regard to the whereabouts of this individual is asked to call the NYPD's Crime Stoppers Hotline at 1-800-577-TIPS (8477) or for Spanish, 1-888-57-PISTA (74782). The public can also submit their tips by logging onto the CrimeStoppers website at WWW.NYPDCRIMESTOPPERS.COM or on Twitter @NYPDTips.