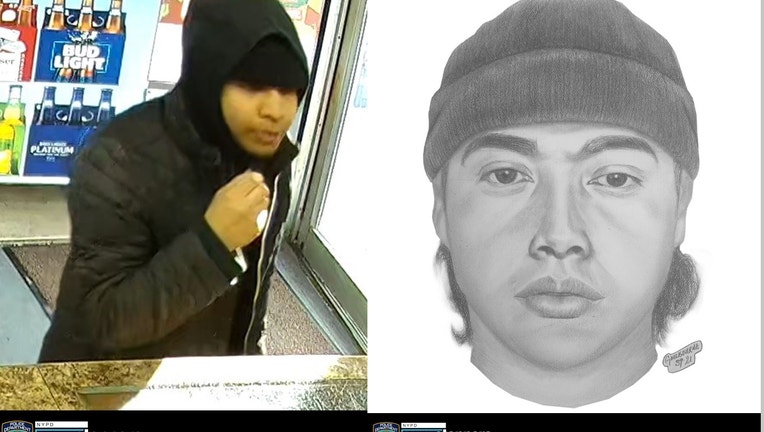 NEW YORK - In a shocking incident, the NYPD is on the hunt for a male they say robbed a student at knifepoint inside a school in Queens.

It happened around 2:30 p.m. on Wednesday, December 1, inside of Robert A. Van Wyck Junior High School in the Briarwood section.

Police say the man entered a bathroom and approached an 11-year-old student inside. He then pulled a knife and pointed it at the boy's chest and demanded money.

The student told to robber he did not have any money, so the suspect took the victim's water bottle and took off out of the school.

The boy was not hurt in the crime.

Police say the same man is wanted for an assault that happened just five minutes later when he allegedly approached a 51-year-old man at the corner of 85th Road and 149th Street.

RELATED: Teen busted with gun, $30,000 in cash at Brooklyn school

Authorities say the suspect began to argue with the victim before pulling out a knife and lunging at the man's throat.

The suspect did not make contact but continued slashing at the victim multiple times, cutting his jacket but not his arm. The suspect then threw a water bottle at the man and ran away.

The man was not hurt in the attack

Police describe the suspect as Hispanic approximately in his teens, standing 5'2'' tall, 110 pounds, with a slim build, and light complexion. He was last seen wearing a black mask, a black hooded sweatshirt, a black jacket, and black pants.

Police say all calls are confidential.

A man was knocked unconscious with a brick in a robbery in a Bronx building.