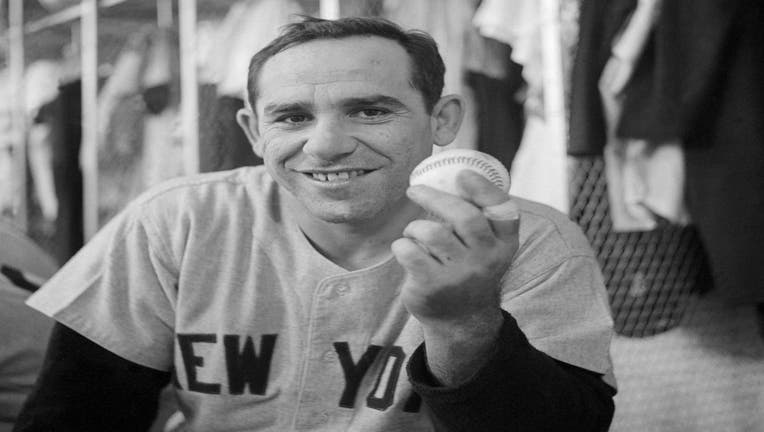 (Original Caption) Yankee Yogi Berra set a new home-run record for catchers when he hit the 237th homer of his career during the 5th inning of the New York-Detroit game on September 14th. In this photograph, Berra holds the ball which he hit to make

WASHINGTON (AP) - Yogi Berra will soon be all over — your mail, that is.

The New York Yankees great known for his funny malaprops will be featured on a new stamp this year, the U.S. Postal Service announced Friday, truly making him a man of letters.

Among his more notable Yogi-isms: "It ain’t over till it’s over" and "when you come to a fork in the road, take it" and "the future ain’t what it used to be."

Born as Lawrence Peter Berra, the Hall of Fame catcher died in 2015 at 90.

The preliminary design of Berra’s stamp shows him smiling in catcher's gear while wearing Yankees pinstripes.

Author Ursula K. Le Guin and artist Emilio Sanchez also will be portrayed on stamps this year, along with ones depicting a mallard duck, sun science and tap dancing.

The issue date for the new stamps will be announced later, and maybe fans will flock to the post office to get Berra’s stamp.

As Yogi famously said about a popular spot: "Nobody goes there anymore. It’s too crowded."