A Staten Island grocery store worker was arrested after slapping Rudy Giuliani on the back.

NEW YORK - A man charged with assault for allegedly slapping former New York City Mayor Rudolph Giuliani on the back filed a notice of claim against the city Thursday for $2 million for false arrest.

Daniel Gill was seen on a video in June touching Giuliani on the back with an open hand while Giuliani was at a Staten Island ShopRite supermarket supporting his son Andrew's campaign for the GOP nomination for New York governor. Gill said, "What's up scumbag?" according to a notice of claim released Thursday.

While Giuliani appeared to barely react in the video, he later said it felt "like somebody shot me" or that he had been hit by a boulder.

Gill was jailed for more than 24 hours and lost his job at the market as a result of his arrest and the surrounding publicity, according to the notice of claim.

Gill accepted a deal Wednesday with prosecutors under which the charge will be dismissed if he stays out of trouble for the next six months. Gill has no prior criminal record, according to an attorney who represented him on the assault charge. 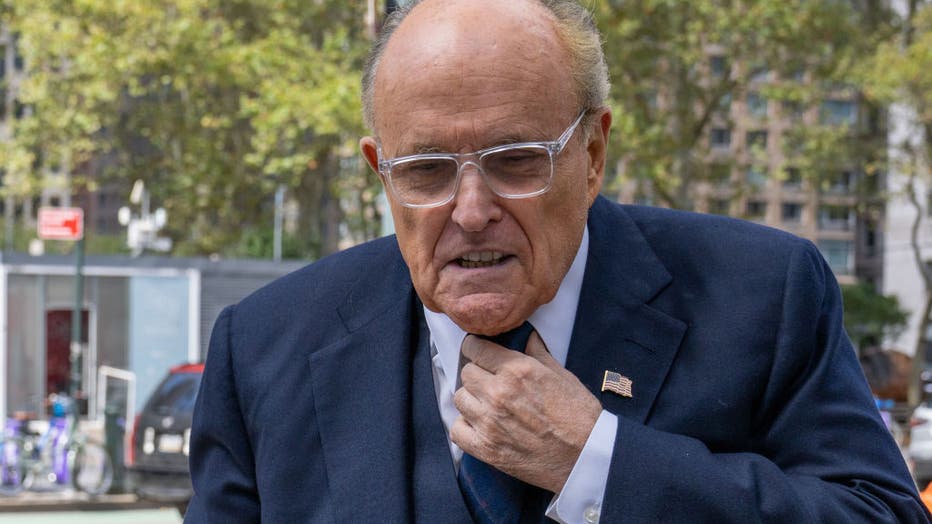 Giuliani was not named in the action because he "is not a municipal employee and the City of New York is (mercifully) no longer responsible for his misconduct," according to the filing.

The city's law department declined comment. The notice of claim, which is a precursor to a potential lawsuit, will be reviewed by the city comptroller's office.

The 78-year-old Giuliani, a Republican, served as mayor from 1994 to 2001, gaining widespread praise for his leadership after 9/11. Now suspended from practicing law, he served as the personal lawyer for former President Donald Trump and took on a leading role in disputing the results of Trump’s 2020 election loss.

"It hurt tremendously," Giuliani said of a man who appeared to slap him on the back of the shoulder at a Staten Island grocery store.