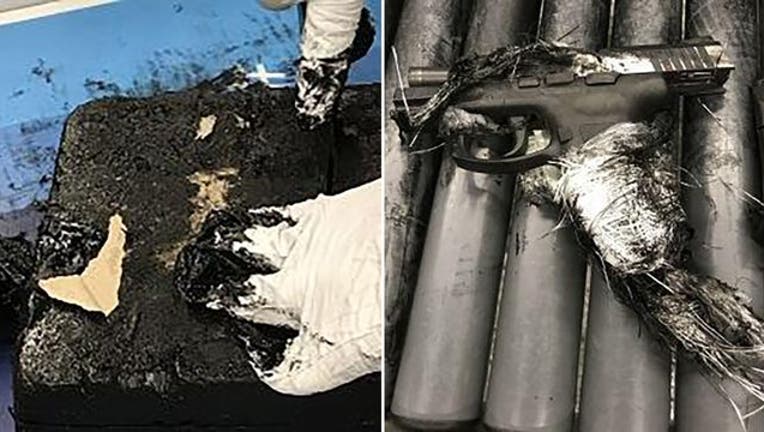 Firearms must be unloaded, packed in a hard-sided case, locked and packed separately from ammunition, the TSA said. (Transportation Security Administration)

FOX NEWS - A man from Barbados was arrested at John F. Kennedy International Airport in New York Monday after security discovered a gun and 20 loose bullets hidden in a tarlike substance, officials said.

Transportation Security Administration officers discovered the .40 caliber handgun and bullets among an unidentified man's carry-on items at a security checkpoint, the agency said in a statement.

The firearm was wrapped in what appeared to be fiberglass and hidden inside a case that was covered in black tar, the TSA said. Airlines don't allow travelers to carry firearms onto planes in carry-on bags, even if they have concealed carry permits.

Port Authority Police confiscated the gun and detained the man for questioning, the statement said. He was later arrested on weapon charges. It was unclear whether he owned the gun or had a permit for it.

TSA officers have detected six guns at JFK security checkpoints so far this year. Two firearms were discovered at the airport in 2018, a year when 4,239 firearms were found in carry-on bags nationwide, the agency said.

Passengers are permitted to travel domestically with firearms only if they are packed correctly in checked baggage and declared to the airline, the TSA said. Details on how to properly travel with a firearm can be found on the TSA's website.

Firearms that are brought to checkpoints may result in criminal charges, the agency said.