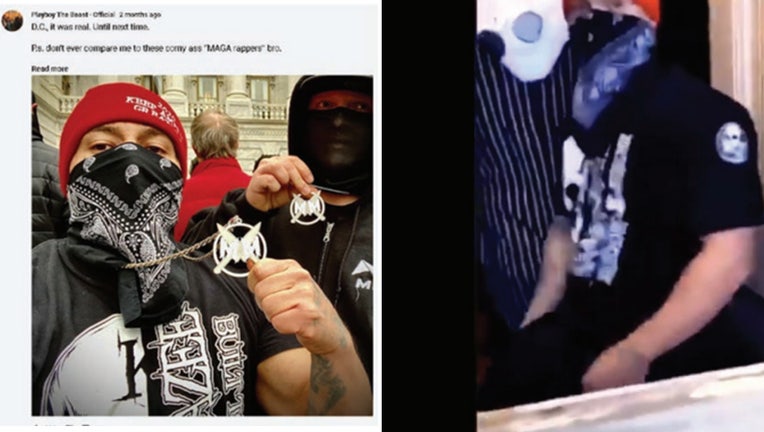 Images of Billy Knutson are shown in the criminal complaint filed by federal authorities.

WASHINGTON - A man charged this week with storming the U.S. Capitol last year performed rap songs about the riot in videos posted on his YouTube channel, federal authorities say.

A relative told the FBI that Billy Knutson was a rapper who sold his music online and has a YouTube channel under the username "Playboythebeast," an FBI agent said in a court filing. Knutson said on social media that he was at the Capitol on Jan. 6, 2021, and posted photos of himself outside the building, the relative said.

One of the songs on Knutson's YouTube channel is called "Patriots: Message To The World" and has more than 60,000 views.

"We been fighting for y’all, and this how you treat us? Calling us traitors and claim we not peaceful?" he sang on the video, which included video clips of the riot.

Messages posted on Knutson's YouTube channel under the username "Playboy The Beast" expressed support for the far-right Proud Boys. More than three dozen people linked to the Proud Boys have been charged with riot-related offenses.

A surveillance video showed Knutson enter the Capitol by climbing through a broken window near the doors of the Senate wing, according to the agent. The video shows Knutson talking to other people, including police officers, and apparently using a cellphone to record images inside the building. He exited through a set of doors after several minutes, the FBI said.

A cellphone number that Knutson used on an economic application submitted to the state of North Carolina matched the number for a cellphone that was near the Capitol on Jan. 6, 2021, according to the FBI.

CAPITOL RIOT:  A LOOK BACK ON YEAR SINCE JAN. 6 INSURRECTION

The charges against Knutson in a criminal complaint include disorderly conduct in a Capitol building and entering and remaining in a restricted building or grounds.

A federal public defender who represented Knutson at the hearing said he referred a request for comment to his supervisor.

There were several rallies across New York City on Thursday to remember the attack on the Capitol Building on January 6, 2021, and to call for expanded voting rights.

More than 700 people have been charged with federal crimes related to the Jan. 6 riot. Knutson isn't the only riot defendant to record a rap song about the riot.

A Florida man, Felipe Marquez, posted a YouTube video in which he rapped about his riot experience to the tune of Shaggy’s "It Wasn’t Me." with lyrics that included, "We even fist-bumped police," and "We were taking selfies." Last month, a judge sentenced Marquez to three months of home confinement.

Antionne Brodnax, a Virginia man who raps under the name Bugzie the Don, pleaded guilty to riot-related charges in October and is scheduled to be sentenced on Jan. 27, A photograph of Brodnax sitting on the hood of police truck during the riot was on the cover of his rap album, "The Capital," according to a Washington Post report.