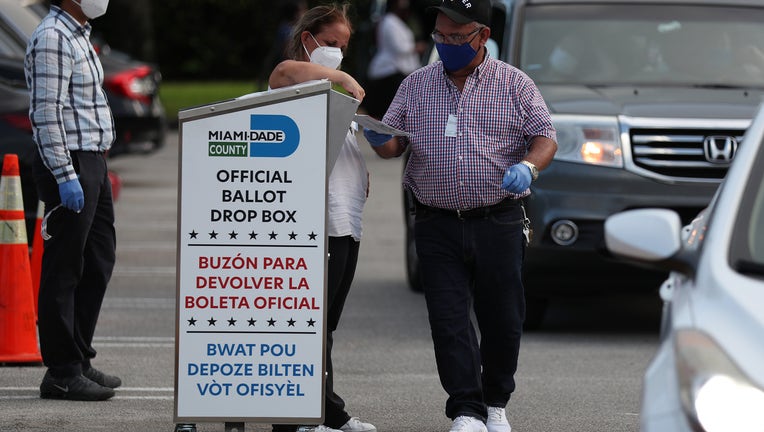 LOS ANGELES - Thousands of absentee ballots get rejected in every presidential election. This year, that problem could be magnified and could prove pivotal in hotly contested battleground states.

With the coronavirus pandemic creating a likely surge in mail-in balloting, while postal delays continue to be reported across the country, the number of rejected ballots in November is projected to be significantly higher than in previous elections.

Two years ago, the national average of rejected mail-in ballots in the general election was about 1.4%, and in the 2016 presidential election year it was 1%, according to a U.S. Election Assistance Commission study.

If ballots are rejected at the same rate as during this year’s primaries, up to three times as many voters in November could be disenfranchised in key battleground states when compared to the last presidential election, according to an Associated Press analysis of rejected ballots. It could be even more pronounced in some urban areas where Democratic votes are concentrated and ballot rejection rates trended higher during this year’s primaries.

“It is the number one thing that keeps me up at night — the idea that voters will do everything they can to ensure their ballot is returned on time and the system will still fail them,” said Michigan Secretary of State Jocelyn Benson.

How your ballot can be rejected

Reasons for ballot rejection can vary. In a few states, a witness or notary must sign the ballot envelope for the ballot to be valid. Where ballots received after Election Day are counted, a legible postmark from that day is generally required.

Once a completed ballot arrives at a local election office, the voter’s eligibility and identity must be verified. Sometimes, missing signatures or unsealed or damaged envelopes can gum up the process.

In Jefferson County, Kentucky, the state’s largest, 3,848 absentee ballots were rejected in the June primary due to lack of a voter signature. That was out of roughly 180,000 absentee ballots cast.

Veteran vote-by-mail states send out periodic mailers to verify voter addresses and get updated signatures. They also have built “ballot-curing” measures into existing systems in case voter signatures don’t match what’s on record or ballot envelopes arrive damaged or missing required information. But such systems are far from universal and their absence has led to lawsuits in some states.

The complexity of signature matching is a major issue. Many election offices register voter signatures from a variety of sources — for instance, those scribbled with styluses on cramped touchscreens at motor vehicle departments. The result: A matching process prone to human error.

“It’s terrible, but it’s the best option we have,” said Jennifer Morrell, a former elections official in Colorado and Utah. Rigorous training and bipartisan teams reviewing signatures can help mitigate some of the concerns, but people’s signatures change over time and physical ledgers capturing these changes are an endangered species.

According to the National Council of State Legislatures, 31 states currently use signature verification as a form of authenticating incoming absentee ballots.

Previous studies have shown that first-time and minority voters — who more often vote Democratic — are more likely to have their signatures rejected.

University of Florida political scientist Daniel Smith found that Black and Latino voters and those under age 30 in the state were at least twice as likely as older and White voters to have ballots rejected over signature mismatches.

More than 100,000 mail-in ballots were rejected in California’s primary in March, according to data obtained by The Associated Press that highlights a glaring gap in the state’s effort to ensure every vote is counted.

Another 27,525 either didn’t have a signature, or the signature didn’t match the one on record for the voter.

Make sure your ballot contains all the required documentation

Thirteen states require voters to submit a copy of their ID in order to vote by mail. Oklahoma and Missouri also requires voters to notarize their ballot envelopes, while some states, including Alaska, Louisiana, Mississippi, North Carolina, South Carolina and Wisconsin, require a separate witness signature on ballot envelopes.

Voting rights organizations like Voteriders.org can help individuals navigate their state’s voter-ID laws, as many can be fairly complex.

In general, voting by mail is much less forgiving than the in-person method, where a voter’s identity is verified on the spot and any difficulties can be handled by poll workers.

RELATED: Election officials, experts and USPS urging voters not to wait until state deadlines to mail in ballots

According to Votingrightslab.org, only 19 states have a process requiring election officials to notify voters if problems occur with their ballots and providing an opportunity for those voters to fix it.

Therefore, giving yourself plenty of time to fix any mistakes is critical.

Experts say voters must be diligent about requesting and returning absentee ballots well ahead of Election Day; the Postal Service advises allowing at least seven days for a ballot to reach an election office.

During California’s March presidential primary, the most common problem by far was missing the deadline for the ballot to be mailed and arrive. To count in the election, California ballots must be postmarked on or before Election Day and received within three days afterward. Statewide, 70,330 ballots missed those marks.

Click here to find out your state’s absentee or mail-in ballot deadline.