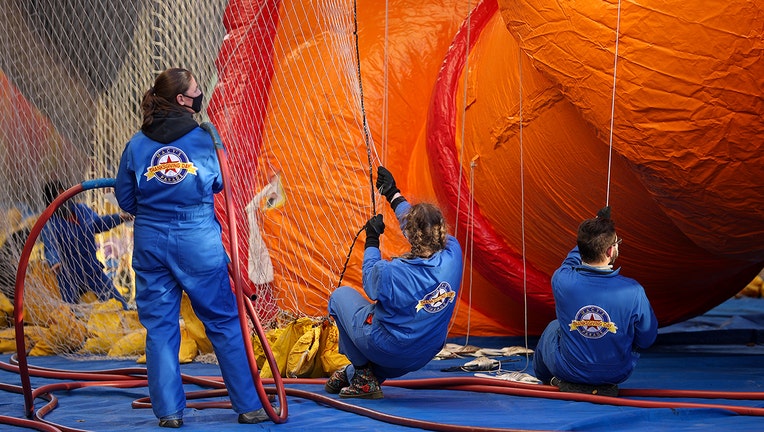 The Macy's inflation team works on giant balloons as they prepare ahead of the 95th Macy's Thanksgiving Day Parade in New York City, United States on November 24, 2021. (Photo by Tayfun Coskun/Anadolu Agency via Getty Images)

NEW YORK - If you want to get a look at the balloons before the Macy's Thanksgiving Day Parade you can see them while they're being inflated on Wednesday.

The inflation is open to the public from noon until 6 p.m. on Wednesday, Nov. 23.

16 giant character helium balloons will be inflated and prepped along with 40 novelty and heritage inflatables.

Where are the Macys balloon inflated?

The public entrance point is accessed at 72nd St. and Columbus Ave. on the Upper West Side.

All spectators are subject to security screening by the NYPD.

New this year ill be the ability of the guests to see select float assembly between 81st and 86th Streets.

How long does it take to inflate a Macy's Day parade balloon?

It takes about 90 minutes to inflate each balloon.

The 96th Macy's Thanksgiving Day Parade will be on Thursday.  Here are details on the parade route.