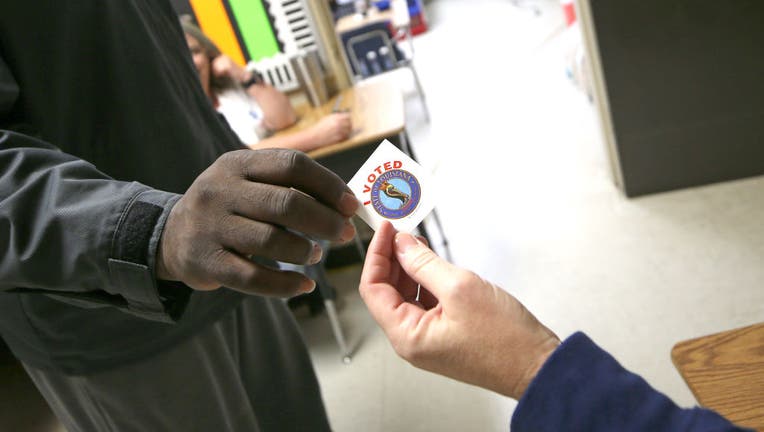 FILE - A person gets an "I Voted" sticker during a runoff election for Louisiana Governor at a polling station at Quitman High School on November 16, 2019 in Quitman, Louisiana. (Photo by Matt Sullivan/Getty Images)

BATON ROUGE, La. - Louisiana's chief elections officer asked the governor on Friday to postpone the state's April presidential primary election for two months because of the new coronavirus, as the number of residents who tested positive continued to grow.

Secretary of State Kyle Ardoin started the process for delaying the April 4 primary with an emergency certification to Gov. John Bel Edwards. Ardoin asked for a new June 20 primary date. Edwards was expected to agree to the request, making Louisiana the first state to push back its election because of the virus.

Early voting in Louisiana's election was scheduled to start in a week. But with a large number of elderly poll workers and worldwide concerns about people gathering in groups, Ardoin's office said it didn't feel comfortable continuing with the election plans.

As of Friday, the number of residents testing positive in the state had jumped to 33, centered largely in the New Orleans area, according to the state health department's latest figures. The positive tests are awaiting confirmation from the Centers for Disease Control and Prevention.

The number of parishes with infected residents has grown to eight, with most of those in the New Orleans area, but one case has been identified in northwest Louisiana, in Caddo Parish.

For most people, the virus causes only mild or moderate symptoms such as fever and cough. For some, especially older adults and people with existing health problems, it can cause more severe illness, including pneumonia. Most people recover within weeks.

Edwards has declared a public health emergency. State prisons have suspended visitation for 30 days, and hospitals and nursing homes are limiting visitor access, in an effort to prevent the spread of the coronavirus to vulnerable populations.

Events around Louisiana, like around the country, were being canceled. The Southern University System joined the Louisiana State University System and several New Orleans universities in starting to move all of its classes online. The Louisiana Legislature, only one week into its three-month session, began working on contingency plans for must-pass bills, such as the budget — in case lawmakers decide to shut down work early.