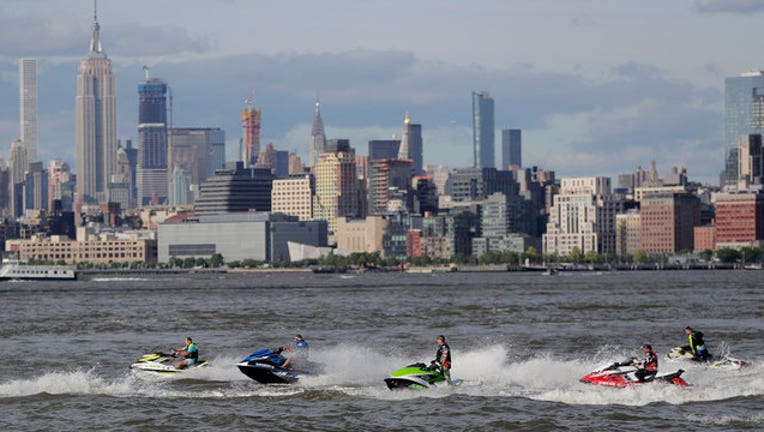 A group of people atop jet skis ride along the Hudson River near Liberty State Park with the New York City skyline seen at a distance, Friday, May 24, 2019, in Jersey City, N.J. (AP Photo/Julio Cortez)

NEWARK, N.J. (AP) - A glimmer of hope has appeared in the seemingly intractable dispute over who will pay for improvements to the century-old rail infrastructure connecting New Jersey to New York and points north and south.

Recent comments by federal transit officials indicate that a $1.6 billion project to build a new bridge over New Jersey's Hackensack River is making progress toward clearing a hurdle currently standing in the way of its receiving the federal funding needed to begin construction. Last year, the project was disqualified from a federal grant program in a dispute over how much money New Jersey was putting up.

The Portal North bridge, slated to replace a 109-year-old swing bridge that occasionally becomes stuck after it opens to allow boats to pass under, is a component of the larger Gateway project that also includes a new rail tunnel under the Hudson River. The tunnel project also has been stalled by funding disputes with the federal government.

Nearly 200,000 people and 450 trains cross the bridge each day traveling between New York and points between Boston and Washington, D.C.

It is the farthest along of the Gateway-associated projects, having completed design work and received environmental approval in 2013.

What it lacked was federal funding. Last year, the Federal Transit Administration gave the project a low rating that disqualified it from a key federal grant program, despite the fact the state had committed $600 million through a bond issue backed by the state's gas tax. New Jersey is seeking roughly $811 million in grant money.

Last week, acting FTA Administrator K. Jane Williams told members of a House transportation subcommittee that New Jersey Transit, which is overseeing the project, is "making progress" toward being able to petition for a higher rating this fall, pending state and board approval.

Democratic New Jersey Reps. Donald Payne and Tom Malinowski - both members of the House subcommittee - along with fellow New Jersey Democrat Albio Sires wrote to Williams on Wednesday noting that those benchmarks have already been met.

Jerry Zaro, chairman of the Gateway Development Corp., which oversees the rail projects, said Thursday he was encouraged by Williams' comments.

"Portal is ready to move forward and finally deliver 21st-century transportation for 200,000 daily passengers who will never again have to endure delays due to an ancient, moveable bridge," he said.

Once construction begins, building the bridge would take about four to five years.