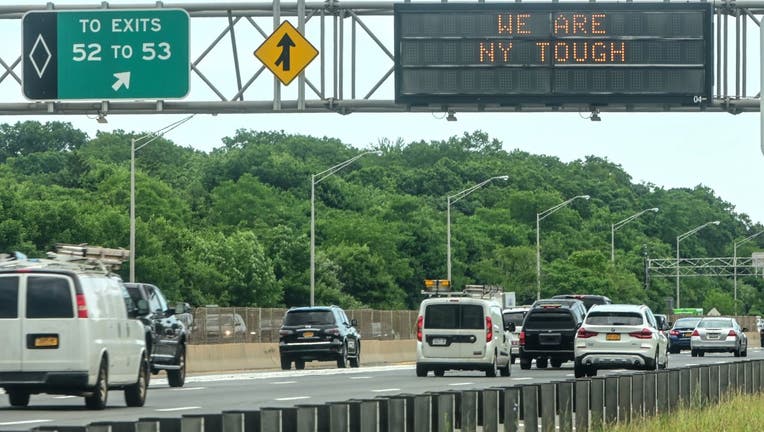 Traffic in the Eastbound lanes of the Long Island Expressway in Dix Hills, New York, are greeted by a "We Are NY Tough" sign on the afternoon of June 25, 2020. (Photo by Thomas A. Ferrara/Newsday via Getty Images).

MELVILLE, N.Y. (AP) - Long Island’s two counties are among the tops in New York state for auto fatalities, and officials and safety advocates say increased enforcement can’t be the only solution.

Data from the Albany-based Institute for Traffic Safety Management and Research show Suffolk County led the state with 113 people killed last year and Nassau County was third, behind Queens, with 78, Newsday reported Sunday. New York has 62 counties, and Nassau and Suffolk each rank in the top six in population.

Human factors such as excessive speed are considered the overwhelming factor, and police in both counties are trying to crack down more on reckless driving. Safety advocates say roadway design changes need to be part of the solution as well.

"I think it’s very unfortunate because the speed limit isn’t enforced and the courts are too lenient," Maldonado said.

Police in Suffolk County are launching a new safe-driving initiative that aims to give more summonses for reckless or distracted driving, and eventually marked and unmarked units will be deployed to high-crash areas, Newsday reported.

Nassau County Executive Laura Curran said police in her county also are renewing efforts to crack down on speeding, texting while driving and driving under the influence.

"The key is to make the drivers uncomfortable enough, so they’re forced to drive slower with changes in roadway design," said Eric Alexander, director of Vision Long Island, a planning group. "It’s a simple thing. If these crashes are at lower speeds, people survive."