As the aftermath of yet another deadly mass school shooting unfolds in Uvalde, Texas, many Americans are left to wonder whether there is an end in sight for such tragedies.

News of the Texas elementary school shooting comes less than two weeks after another mass shooting that took place at a grocery store in Buffalo, New York, that left 10 people dead.

As America mourns the deaths after another mass shooting, it’s worth pausing to remember the lives of those lost in some of the country’s other deadly school shootings. 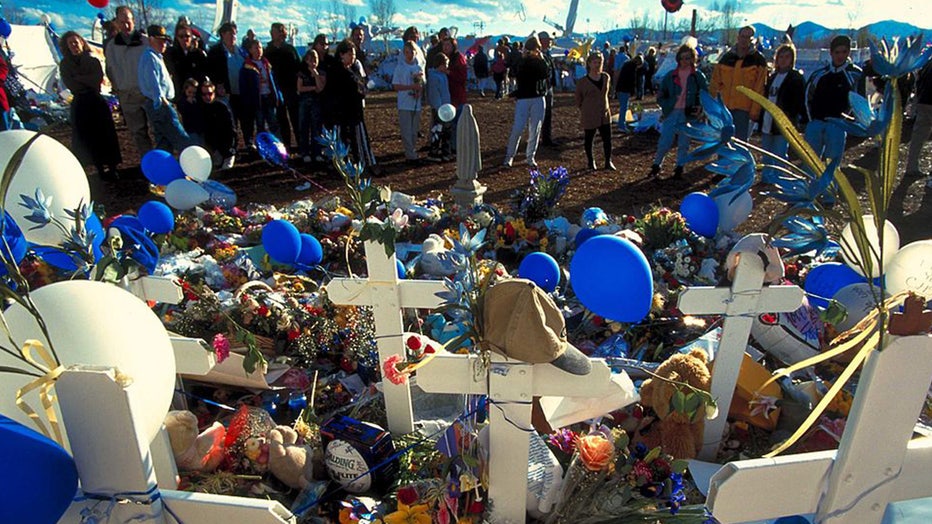 FILE - Flowers and tokens laid at a makeshift memorial in remembrance of 13 victims killed by two gunmen who went on a shooting spree at Columbine High School. (Steve Liss/Getty Images)

On April 20, 1999, two students gunned down 12 students and a teacher and wounded more than 20 others before turning the gun on themselves.

The gunmen were identified as Eric Harris and Dylan Klebold, who were 18 and 17 at the time.

Harris and Klebold had arrived in separate cars that morning and attempted to set off 20-pound propane bombs inside the school’s cafeteria. When the bombs failed to go off, the pair started their shooting spree, according to History.com.

At the time, the Columbine High School mass shooting was the most deadly school shooting in U.S. history. 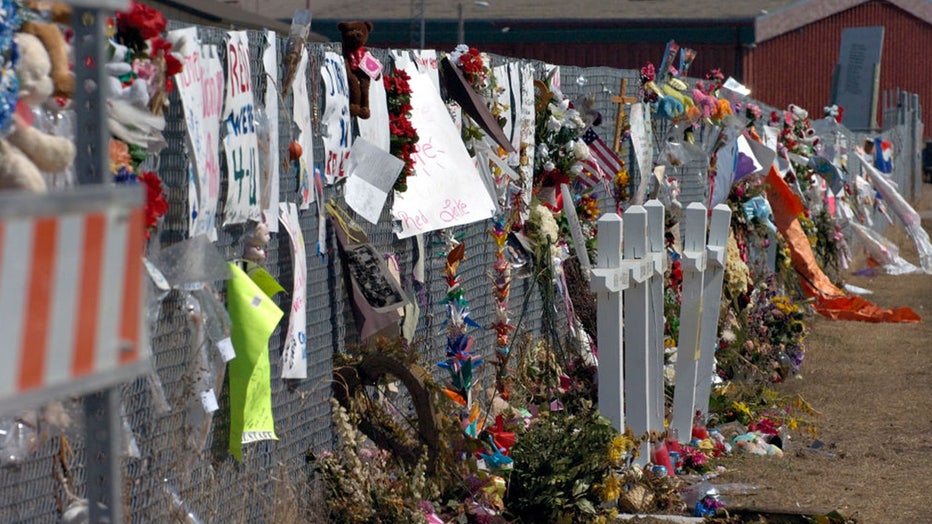 FILE - A memorial to those hurt or killed in the Red Lake H.S. shooting covers several hundred feet of a chainlink fence outside the Red Lake Middle School. (DAVID BREWSTER/Star Tribune via Getty Images)

After law enforcement arrived at the scene, the gunman, identified as Jeffrey Weise, died by suicide. 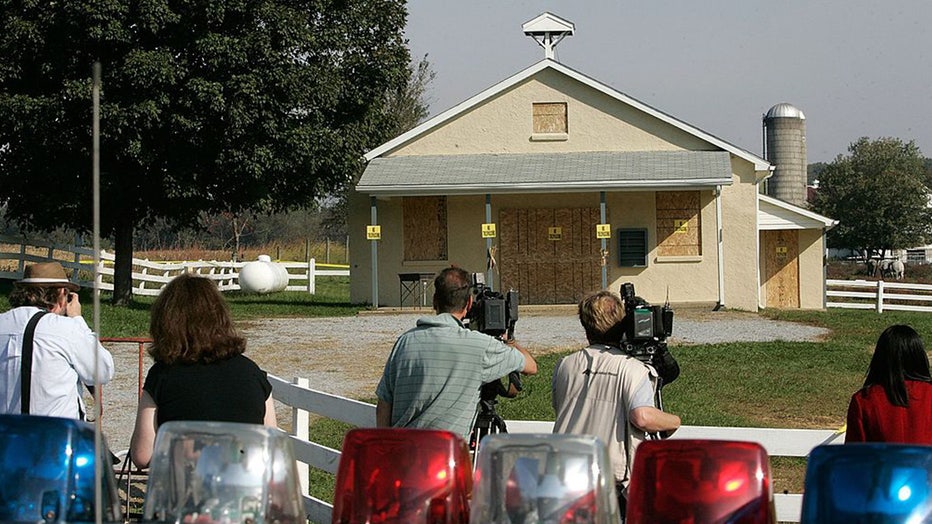 FILE - Members of the media get their first close-up look in the daytime of the one-room Amish school house where the shooting took place two days prior, Oct. 4, 2006, in Nickel Mines, Penn. (Mark Wilson/Getty Images)

The 11 remaining female students were ordered to line up against a blackboard before being tied up. Roberts barricaded the doors before law enforcement arrived.

Roberts then proceeded to shoot five of the girls before turning the gun on himself. 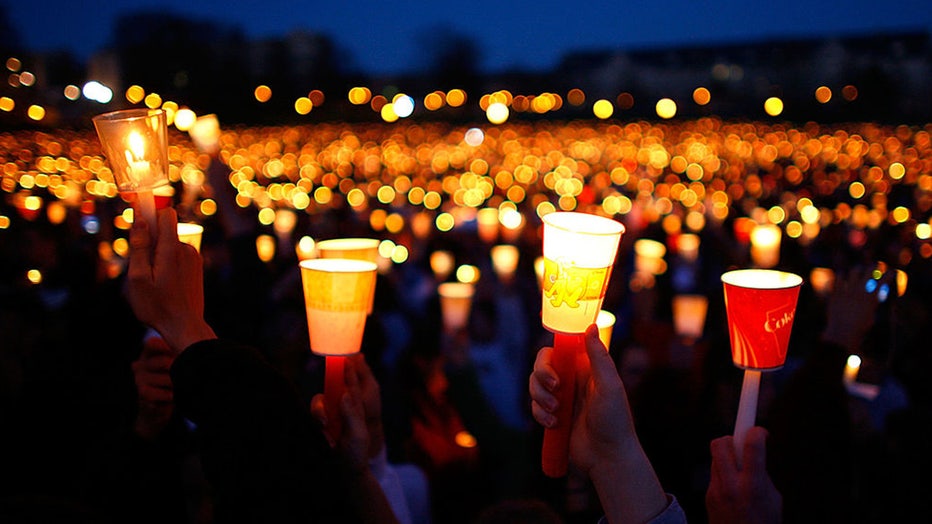 On April 16, 2007, Virginia Tech student Seung-Hui Cho opened fire on a student and a resident assistant in a dorm before heading to his next destination to continue his shooting spree.

Cho took a 9-millimeter handgun, a 22-caliber handgun and hundreds of rounds of ammunition to a nearby classroom building where he chained and locked several doors before gunning down more victims. Cho later died by suicide.

The shooting at Virginia Tech was, at the time, the deadliest mass shooting in recent U.S. history. 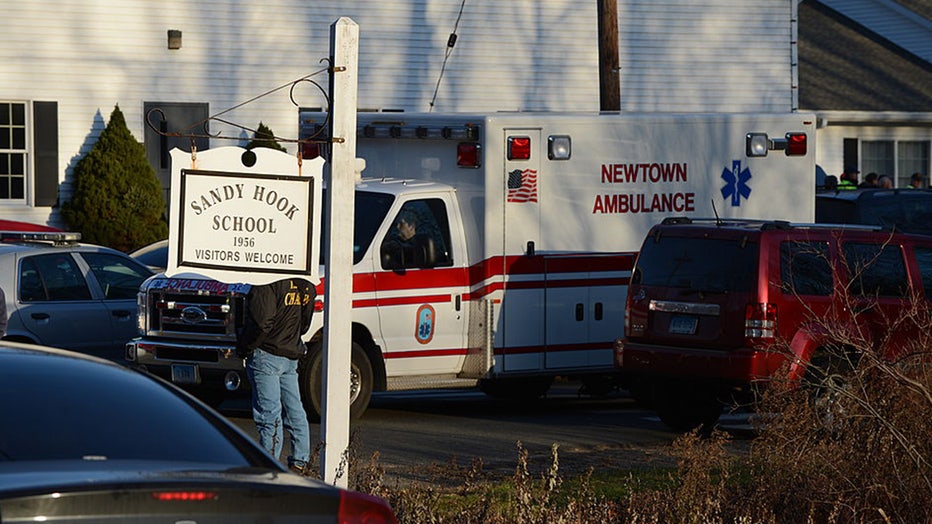 FILE - Police and ambulance, on Dec. 14, 2012, at the scene from the aftermath of a school shooting at a Connecticut elementary school that brought police swarming into the leafy neighborhood, while other area schools were put under lock-down, police (DON EMMERT/AFP via Getty Images)

On Dec. 13, 2012, Adam Lanza walked into Sandy Hook Elementary school and gunned down 20 first-graders and six school employees before turning the gun on himself.

Lanza had attended Sandy Hook as a boy and acted alone in the shooting, according to History.com. 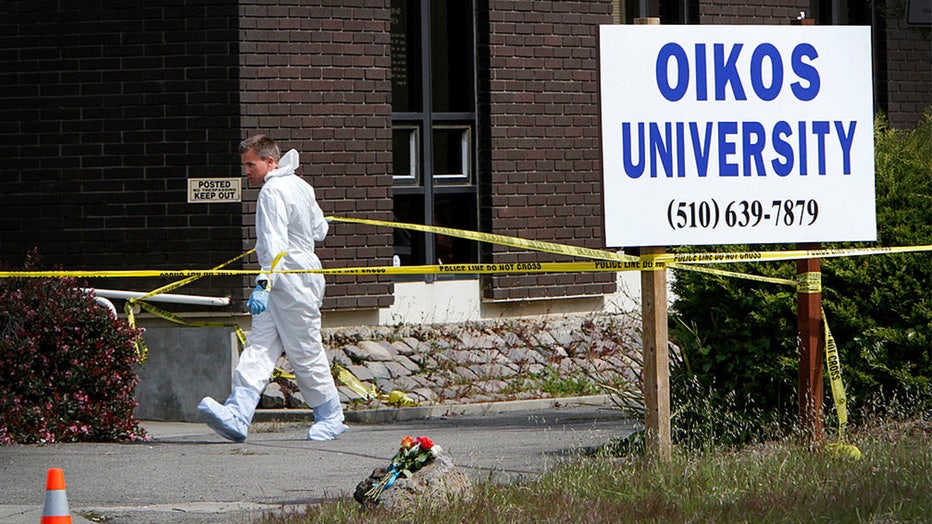 On April 2, 2012, One Goh entered Oikos University and killed several students and one staff member. He wounded three others.

Goh was a paranoid schizophrenic and he believed that the administration at the nursing school was out to get him. He was there, he said, to get a refund from the school. 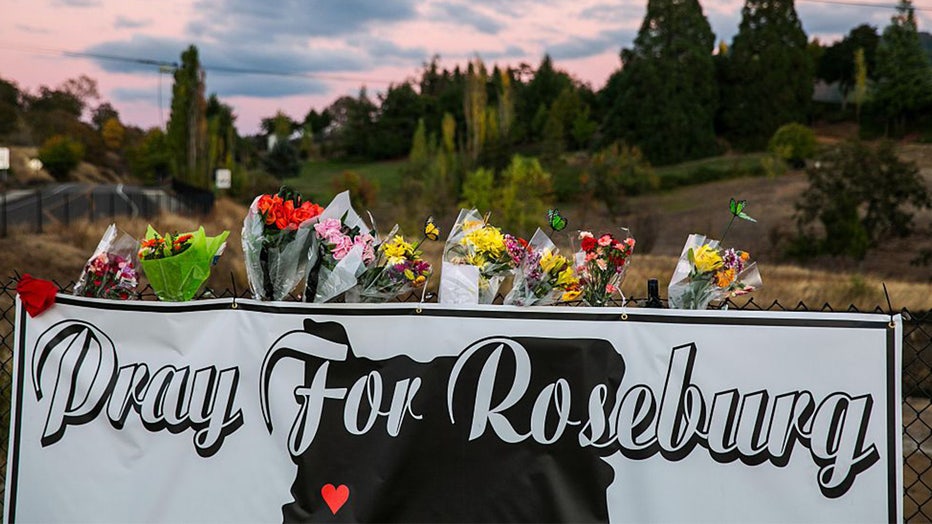 FILE - Bouquets of flowers are left at a makeshift memorial outside the road leading into the Umpqua Community College on Oct. 2, 2015, in Roseburg, Ore.  (Marcus Yam/Los Angeles Times via Getty Images)

On Oct. 1, 2015, a 26-year-old gunman entered a classroom in Snyder Hall at Umpqua Community College and opened fire. He killed nine and wounded nine others. It was the deadliest shooting in state history.

Law enforcement arrived at the campus and exchanged gunfire with the suspect, identified as Christopher Harper-Mercer, before he turned the gun on himself. 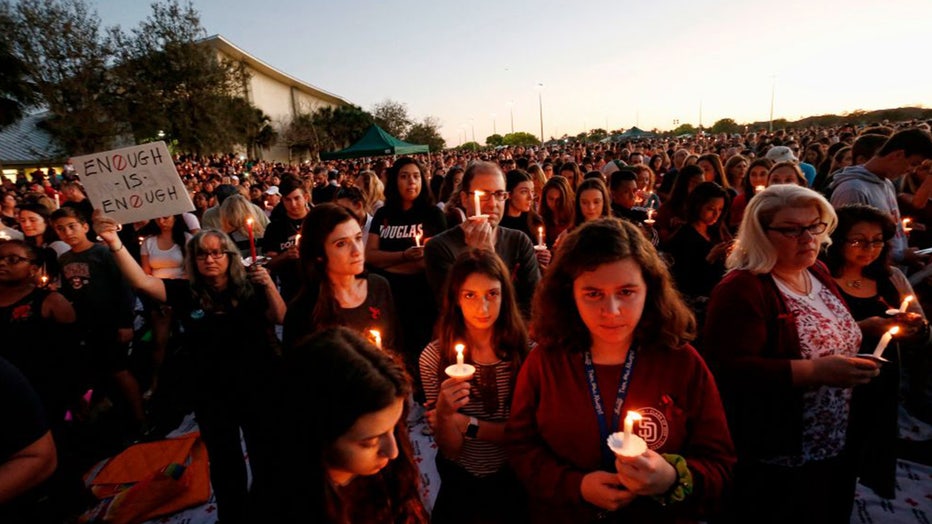 FILE - Thousands of mourners hold candles during a candlelight vigil for victims of the Marjory Stoneman Douglas High School shooting in Parkland, Fla. on Febr. 15, 2018. (RHONA WISE/AFP via Getty Images)

After the shooting spree, Cruz attempted to flee but was soon apprehended and taken into police custody without incident.

Then-Gov. Rick Scott passed a law which called for a 21-year-old legal age requirement for gun purchases and a three-day waiting period on all gun transactions. 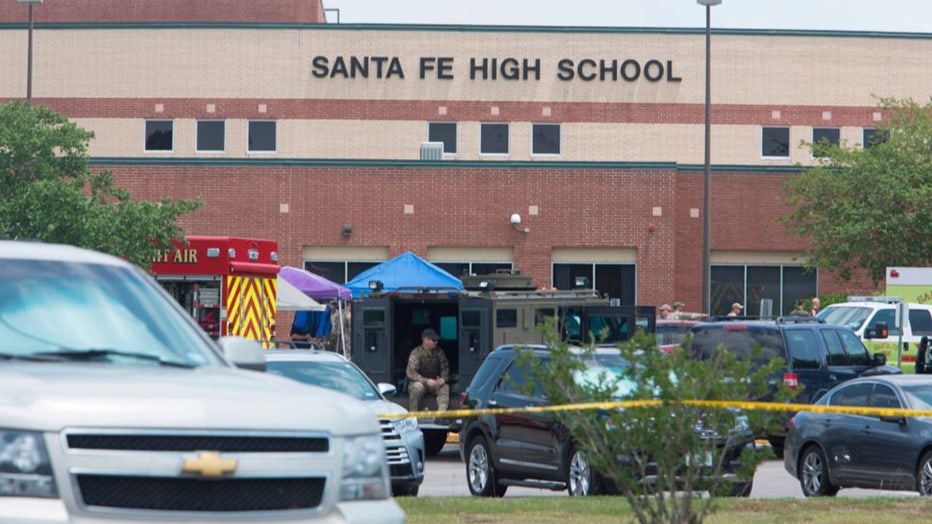 FILE - Emergency crews gather in the parking lot of Santa Fe High School where at least eight people were killed on May 18, 2018, in Santa Fe, Texas.  (DANIEL KRAMER/AFP via Getty Images)

On May 18, 2018, Dimitrios Pagourtzis, who was 17 at the time of the incident, opened fire on fellow students and school staff.

Along with a shotgun and pistol, Pagourtzis also had homemade explosives including pipe bombs, at least one Molotov cocktail and pressure-cooker bombs similar to those used in the Boston Marathon attack, authorities said.

It was the nation’s deadliest such attack since the massacre in Parklan, Fla., that gave rise to a campaign by teens for gun control. 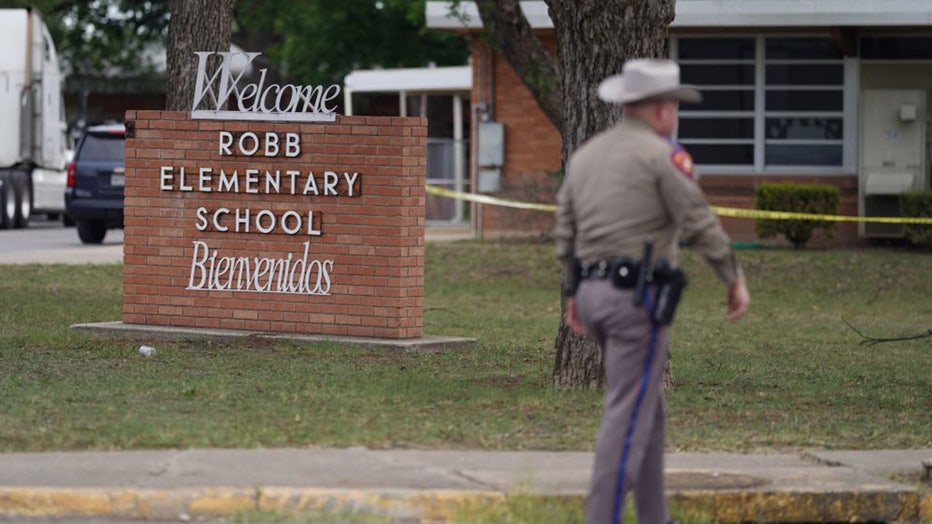 An officer walks outside of Robb Elementary School in Uvalde, Texas, on May 24, 2022. (ALLISON DINNER/AFP via Getty Images)

An 18-year-old gunman opened fire On May 24, 2022, at a Texas elementary school, killing 19 children and two teachers and wounding others, Texas Gov. Greg Abbott said.

The gunman was likely killed by police officers but the events were still being investigated, Abbott said.

It was the deadliest shooting at a U.S. grade school since the shocking attack at Sandy Hook Elementary almost a decade ago.

RELATED: Who is Salvador Romas? What we know about Texas elementary school shooting suspect

The Associated Press and KTVU contributed to this report. This story was reported out of Los Angeles.