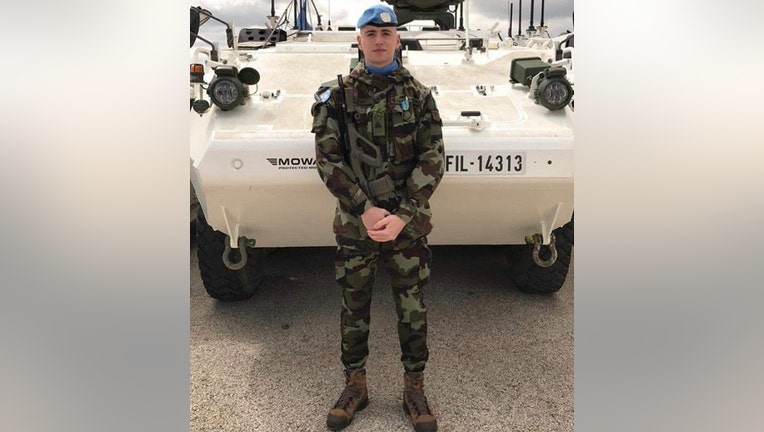 BEIRUT (AP) - An Irish U.N. peacekeeper was killed and several others were wounded when unidentified attackers opened fire on a convoy in southern Lebanon, Irish and Lebanese military officials said Thursday. The area is a stronghold of the Lebanese militant Hezbollah group.

The Irish Defense Forces said in a statement that a pair of armored vehicles carrying eight Irish troops from the U.N. peacekeeping mission, known as UNIFIL, was fired on as they drove north, toward Beirut on Wednesday night near the town of Al-Aqbiya.

The Irish military identified the killed peacekeeper as Pvt. Seán Rooney of Newtwoncunningham, Ireland. It noted that one of the three wounded soldiers was in serious condition. It did not identify the assailants.

UNIFIL confirmed that one peacekeeper was killed and three were wounded but did not share further details.

"Our thoughts are also with the local civilians who may have been injured or frightened during the incident," UNIFIL spokesperson Andrea Tenenti said, adding that "details are sparse and conflicting." Tenenti added that UNIFIL is coordinating with the Lebanese military and trying to "determine exactly what happened."

A person familiar with the investigation said that the armored vehicle carrying the peacekeepers had rolled over while trying to escape the scene after locals began shooting.

Local residents were angered and became aggressive when two UNIFIL armored vehicles, which were heading to the Beirut airport, took a detour through Al-Aqbiya, which is not part of the area under UNIFIL's mandate, the person said. The person was not authorized to discuss the matter publicly and therefore spoke on condition of anonymity.

Our thoughts are also with the local civilians who may have been injured or frightened during the incident.

A security official, speaking on condition of anonymity in line with regulations, said seven bullets were retrieved from the vehicle. Rooney was killed with a bullet to the head, the official said, indicating the fatal bullet would likely be a key piece of evidence in the investigation.

Lebanon's Foreign Ministry condemned the incident, while the office of Lebanese caretaker Prime Minister Najib Mikati issued a statement calling for an investigation.

Mikati "praised the sacrifices that UNIFIL forces made to maintain peace in the south, which reflects stability for the people of the region and Lebanon in general," the statement said.

Irish Prime Minister Micheál Martin expressed his condolences in a statement on Twitter.

"It is a reminder that our peacekeepers serve in dangerous circumstances, at all times, in the cause of peace," he said.

Cell phone videos circulated online show one of the two UNIFIL vehicles speeding to leave the area while it was shot at. Some residents were visible filming the incident. Another video showed the vehicle had rolled over after crashing into the aluminum shutters of a building, with a wounded peacekeeper on the ground beside it.

Al-Manar TV, run by Hezbollah, claimed that a UNIFIL vehicle had "run over" a group of residents who had gathered to watch the World Cup semi-final match between Morocco and France. A Hezbollah spokesperson contacted by The Associated Press declined to comment on peacekeeper's death "until we have all the data."

It is a reminder that our peacekeepers serve in dangerous circumstances, at all times, in the cause of peace.

At the U.N. headquarters in New York ahead of a U.N. Security Council meeting, Ireland's Foreign Minister Simon Coveney said 23-year-old Rooney was in one of the two armored vehicles left the Irish base camp for Beirut, each with four personnel.

"The vehicles, for whatever reason, got separated, and then one of the vehicles was surrounded by what I can only describe as a mob, who were very aggressive towards the vehicles," Coveney said. "Shots were fired, and unfortunately, one of our personnel lost his life" and three Irish soldiers were wounded.

"We will demand the truth in relation to what happened here," Coveney said, adding that he has spoken to Lebanese officials on Thursday and received assurances about fill cooperation in the investigation.

He said Ireland has participated in UNIFIL for decades and its last fatality was 20 years ago.

Confrontations between residents in southern Lebanon and UNIFIL troops are not uncommon. In January, unknown perpetrators attacked Irish peacekeepers in the southern town of Bint Jbeil, vandalizing their vehicles and stealing items. The residents accused them of taking photographs of residential homes, though the U.N. mission denied this.

UNIFIL was created to oversee the withdrawal of Israeli troops from southern Lebanon after a 1978 invasion. The U.N. expanded its mission following the 2006 war between Israel and Hezbollah group, allowing peacekeepers to deploy along the Lebanon-Israel border to help the Lebanese military extend its authority into the country's south for the first time in decades.

That resolution also called for a full cessation of Israeli-Hezbollah hostilities, which has not happened.