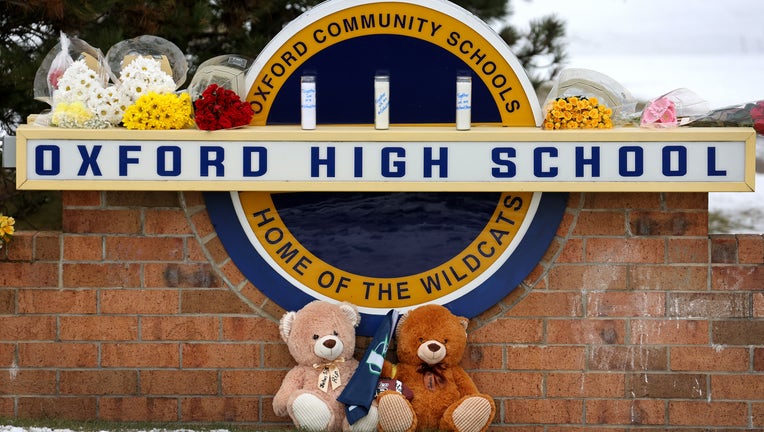 OXFORD, MICHIGAN - DECEMBER 01: Stuffed bears and flowers are gathered at a makeshift memorial outside of Oxford High School on December 01, 2021 in Oxford, Michigan. Yesterday, four students were killed and seven injured when a gunman opened fire on

FERNDALE, Mich. - The person believed to have offered a place for James and Jennifer Crumbley to hide after they were charged with involuntary manslaughter in the Oxford shooting incident has been identified as Andrzej Sikora.

Sikora, a resident of Oakland County, hasn't been charged with a crime, his attorney said in a statement.

But according to Sheriff Michael Bouchard and Detroit Police Chief James White, they might.

"They didn't break in. Somebody let them in," White said of the Crumbleys early Saturday. "We don't know the relationship yet. That's active. That person could face charges."

Police haven't given an update on their investigation into Sikora and it's unclear what relationship he has to the Crumbleys.

According to a release from Clarence Dass, the attorney that has been retained by Sikora, he "voluntarily contacted" police after learning of the Crumbley's arrest on Dec. 4.

"He maintains his innocence throughout this process and is fully cooperating with law enforcement to assist in their investigation."

Sikora, 65, is an immigrant from Poland and a Metro Detroit-based artist.

On Dec. 3, both James and Jennifer Crumbley were each charged with four counts of involuntary manslaughter over their "egregious" conduct regarding their son Ethan, the Oakland County prosecutor said. She announced the reason for the parents being charged during a press conference.

But when police went to arrest the two, they weren't at their home. What followed was an hours long manhunt for them before they were discovered in the basement of an art studio on Bellevue Street. Police located them after a tip came in.