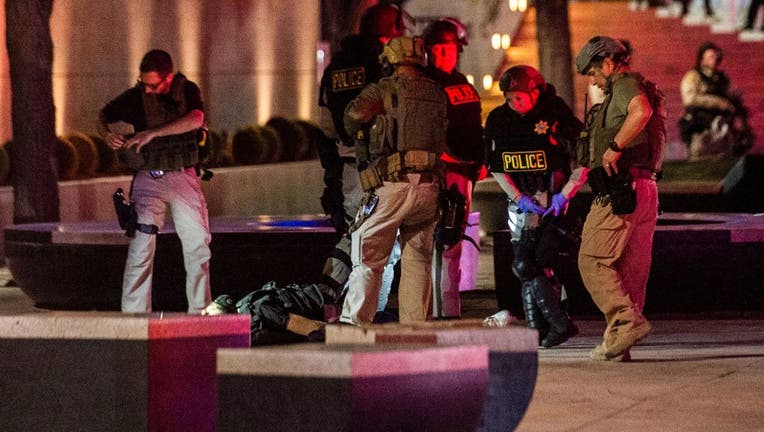 Police officers surround a person that was shot near the 300 block of South Las Vegas Boulevard, on June 1, 2020, in downtown Las Vegas, at the end of a rally in response to the recent death of George Floyd, an unarmed black man who died while in pol

NEW YORK - A police officer was on life support Tuesday after being shot during a protest on the Las Vegas Strip and a man who a federal official said was armed with a rifle was hit with a beanbag projectile and then fatally shot by officers protecting a federal courthouse, authorities said.

The wounded officer was in “grave condition” at University Medical Center in Las Vegas and the suspect in his shooting was taken into custody early Tuesday, Clark County Sheriff Joe Lombardo said. Neither the officer nor the alleged shooter was immediately identified.

“This is a sad night for the LVMPD family and a tragic night for our community,” said Lombardo, who heads the Las Vegas Metropolitan Police Department. “With these protests, which are leading to riots, one tragedy is only leading to another.”

COVERAGE: THE DEATH OF GEORGE FLOYD

U.S. Sen. Catherine Cortez Masto, a Democrat, said she was monitoring the situation. “We don’t have all of the details yet," she said in a Tweet, “but one thing is clear: this violence is unacceptable.”

The shootings appeared unrelated and occurred at about the same time, less than three miles (4.8 kilometers) apart, during a fifth night of protests over the death of George Floyd — a black man who died in police custody May 25 in Minneapolis.

The shootings followed weekend demonstrations that ended in violence and more than 330 arrests over the weekend. There were no immediate reports of injuries to demonstrators in those confrontations, but Las Vegas police said at least 25 officers were injured.

Lombardo and local elected officials pleaded multiple times in recent days for events to remain peaceful, promising to protect the safety of people lawfully exercising free speech. They have resisted calls to impose a curfew similar to one in Reno after violent protests there late Saturday.

The crowd swelled as marchers went south and then north on Las Vegas Boulevard, where casino resorts shuttered to prevent the spread of the coronavirus are preparing to reopen Thursday.

“All night long, everybody worked hard to keep everybody safe,” said U.S. Marshal Gary Schofield, head of the local federal security agency involved with police in the shooting in front of the courthouse. “Unfortunately, criminals hijacked the event.” 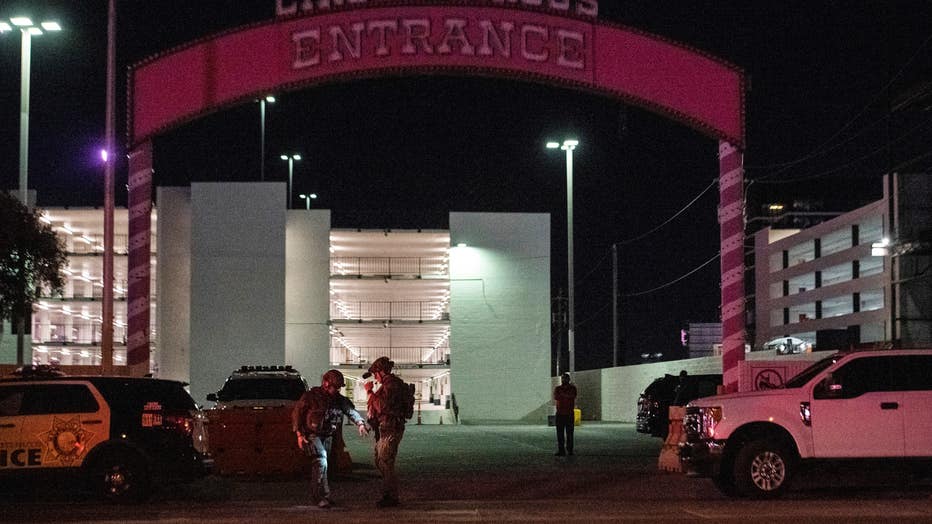 Police officers patrol following the report of a shooting outside Circus Circus hotel and casino, on South Las Vegas Boulevard, on June 1, 2020, in downtown Las Vegas, at the end of a rally in response to the recent death of George Floyd, an unarmed

Schofield said a man wearing a black tactical vest and armed with a rifle was hit with a beanbag round before he was shot. Police said in a statement the man “reached for a firearm and officers engaged him."

Nevada does not prohibit open carrying of firearms. Neither the man nor the officers and marshals involved in the shooting was immediately identified.

“I’m beyond words,” Schofield told The Associated Press. “Everybody is demanding justice. Justice occurs inside these courts.” He noted that community volunteers spontaneously turned out Sunday to clean graffiti left by protesters after Saturday's march.

Lombardo said the wounded police officer was shot after bottles and rocks were thrown at officers trying to disperse a crowd outside the Circus Circus hotel-casino. “Officers were attempting to get some of the protesters in custody when a shot rang out, our officer went down,” Lombardo said.

The sheriff could not confirm that the man shot by officers was involved in the protest but said the location of the shooting “would lead one to believe that he was.”

“He was obviously an open-carry individual,” the sheriff said.