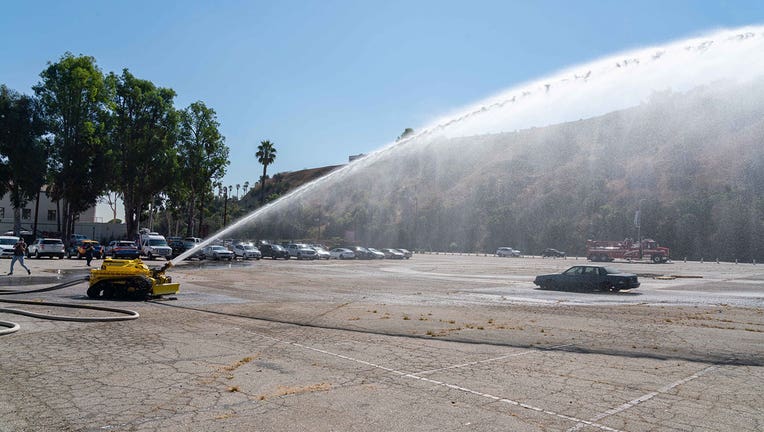 The Los Angeles Fire Department has rolled out its newest firefighter. (LAFD)

LOS ANGELES - The Los Angeles Fire Department introduced its newest firefighter Tuesday, a chunky, low-slung little gadget on wheels that despite its humble appearance can blast out 2,500 gallons of water a minute, go where it's not safe for humans to tread and, in a pinch, even rescue a horse.

The bright yellow machine, which evokes some images of a “Star Wars” droid but without the beeps and burps, is nicknamed RS3. That's short for Robot Solution 3.

“The Los Angeles Fire Department is the first in our country to acquire this amazing piece of new equipment,” Chief Ralph Terrazas told onlookers before before turning RS3 loose in a sprawling parking lot adjacent to the department's downtown training center.

The chief said he became aware of the value of firefighting robots when he saw one nicknamed Colossus on the news last year as it rumbled into the bowels of Paris' Notre Dame Cathedral to take up the fight after human firefighters had to flee the building as the roof threatened to collapse. Colossus was widely credited with helping save both lives and the building.

“It got me thinking about the large fires we have here in Los Angeles. We had one of those fires early this morning in downtown,” the chief said of a blaze that torched two downtown businesses before 130 firefighters, including one who suffered minor injuries, extinguished it.

A similar one last month destroyed a nearly finished apartment building for homeless and low-income people as it sent a scaffolding crashing down onto an adjacent building.

“Those fires sometimes cause us to back out our firefighters because we're concerned about the potential for a building collapse,” Terrazas said, adding firefighters must then resort to fighting the blaze from the outside, using hook-and-ladder trucks.

“This is effective but it takes a long time and uses much more water than we normally have to if we had interior attack."

As Capt. Jason Ortiz ordered RS3 around with a device strapped to his waist that resembled a big video game controller, the robot blasted a fierce steam of water high into the air, shoved an old junked car out of its way and rumbled over a pile of debris as it dragged a pair of huge fire hoses behind it.

During a fire, Ortiz said, RS3 can recognize his commands from a quarter mile away.

Terrazas said it will not only be able to rush into a burning building, but push debris out of its way as it does so, opening a path later for its fellow human firefighters. On a freeway, it can push a car out of the way to get to a burning tanker truck. In a pinch, it can even rescue a horse trapped in a ditch.

To accomplish that latter task, firefighters must now call in a helicopter to lift the horse to safety. With its strength and its off-road capability, RS3 can simply walk the animal out to safety, saving time and money.

At the moment the LA Fire Department may be the only one in the country to have such a robot. But the chief doesn't expect that to be the case for long.

“I know New York is looking at it right now,” he said. Ortiz added that firefighters in Fort Worth, Texas, are acquiring one.

The main prohibition is price. RS3 cost the Fire Department $278,000, with the non-profit Los Angeles Fire Department Foundation picking up the tab. That prompted Terrazas to offer profuse thanks to the foundation and its many sponsors.

As for the robots, "They're using them a lot in China right now," Ortiz said. "But their firefighters are a little different. They use them more for exterior fires. So we're going to be the first department to truly start testing it it out on interior.”