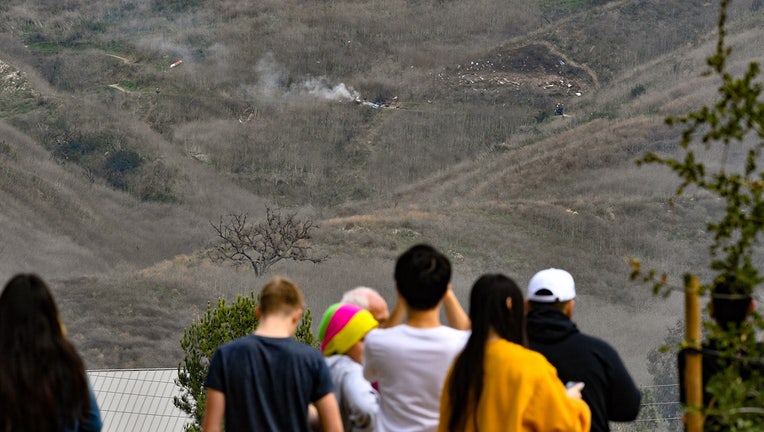 General views of the scenes surrounding the death of Kobe Bryant and his daughter Gianna Maria-Onore Bryant due to a helicopter crash on January 26, 2020 in Los Angeles, California.

LOS ANGELES - Deputies with the Los Angeles County Sheriff's Department disseminated graphic photos of the helicopter crash that killed Kobe Bryant, his daughter Gianna, and seven other victims in Calabasas, according to a damning report by the Los Angeles Times released Thursday.

The L.A.Times cited two sources with knowledge of the incident in their report.

"The sharing of photos of the crash scene and the victims’ remains was the topic of a discussion among first responders two days after the crash," the L.A. Times report says. "The source said he saw one of the photos on the phone of another official, in a setting that had nothing to do with the investigation of the crash."

It's unknown how widely the photos were distributed, who was involved and/or who exactly took the photos at the crash scene, according to the L.A. Times.

FOX 11 reached out to the L.A. County Sheriff's Department for comment on this story. The department said they are aware of the L.A. Times article and are investigating it.

"The Sheriff’s Department is aware of recent media reports alleging deputies shared images from the January 26th, 2020 helicopter crash, which tragically claimed the lives of nine people. The facts surrounding these allegations are currently under investigation, as are the effectiveness of existing policies and procedures. The Sheriff is deeply disturbed at the thought deputies could allegedly engage in such an insensitive act. A thorough investigation will be conducted by the Department, with the number one priority of protecting the dignity and privacy of the victims and their families," wrote the Sheriff's Department on their Facebook page Friday.