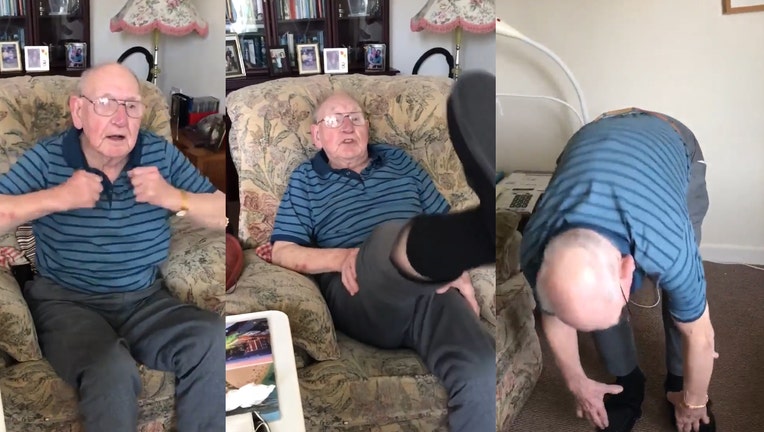 LAKE MARY, Fla. - Age is just a number for Bob Fulton.  Described as a "national treasure," the 96-year-old is showing fellow residents of the United Kingdom and seniors around the world that you can still keep active while being isolated at home during this novel coronavirus pandemic.

"Arms and legs!" Fulton says in a Facebook video demonstrating some exercises one can do while seated if mobility is not an issue.  He follows up with a stretching regimen which he does every morning, his son explains. "Knees and toes!" Fulton chants.

Described as a national treasure, 96-year-old Bob Fulton is showing fellow residents of the United Kingdom and seniors around the world that you can still keep active while being isolated at home during this novel coronavirus pandemic.

"I took the wee video myself in Dad's flat," says son Roy Fulton.  "Dad is already amazed at the reaction it has had so far, and I can confirm really wants everyone to be doing anything that helps beat the isolation and confinement in their homes and he is absolutely committed to demonstrating that exercise can help in so many ways."

Fulton says his father is doing extra dusting, ironing, and housework to keep busy, and this week made some broth for the freezer which he is using daily.

British Prime Minister Boris Johnson on Monday ordered the closure of most retail stores and banned public gatherings of more than two people in a stepped-up response to slow the new coronavirus.

The British government had been taking a more relaxed approach to the pandemic until Johnson announced tougher measures during an address to the nation.  He told the public to "stay at home" for all but a few exceptions. Johnson ordered shops that don't sell essential items to close immediately. He says weddings, baptisms and other ceremonies will be stopped. Funerals are an exception.

Johnson says the coronavirus is the "biggest threat this country has faced for decades."

"I guess after this evening's national broadcast to the U.K. population by Boris Johnson, [it] means that even my short visits to see Dad will now be suspended and communication will now be via the phone daily, but Dad is upbeat about that and insists that given the right approach and staying positive, we can all get through this terrible period," Fulton added.

This story was written out of Lake Mary, Florida with some information taken from the Associated Press.