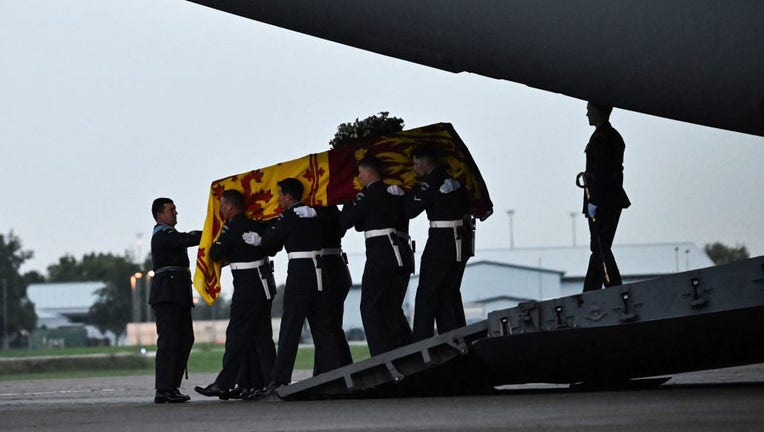 Pallbearers from the Queen's Colour Squadron (63 Squadron RAF Regiment) carry the coffin of Queen Elizabeth II from the C-17 at the Royal Air Force Northolt airport on September 13, 2022, before it is taken to Buckingham Palace, to rest in the Bow Ro

LONDON - The coffin of Queen Elizabeth II returned to Buckingham Palace on Tuesday evening, making its way through a drizzly London as crowds lined the route for a glimpse of the hearse and to bid her a final farewell.

People parked their cars along a normally busy road, got out and waved as the hearse, with lights inside illuminating the flag-draped coffin, made its way into London. In the city, people pressed in on the road and held their phones aloft.

Thousands gathered outside the palace cheered and clapped as the hearse swung around a roundabout in front of the queen's official residence and through the wrought iron gates. King Charles III and other royals waited to greet the casket.

The late monarch’s coffin left her beloved Scotland where 33,000 people filed silently past it in the 24 hours after it was brought to Edinburgh’s St. Giles’ Cathedral from her cherished summer retreat, Balmoral. The queen died there Sept. 8 at age 96 after 70 years on the throne.

Charles had returned to London from Northern Ireland, where his visit drew a rare moment of unity from politicians in a region with a contested British and Irish identity that is deeply divided over the monarchy.

The military C-17 Globemaster carrying the monarch’s casket touched down at RAF Northolt, an air force base in the west of the city, about an hour after it left Edinburgh. U.K. Prime Minister Liz Truss, Defense Secretary Ben Wallace and a military honor guard were among those greeting the coffin at the base.

One of those who stood in the rain waiting for the hearse to pass, retired bus driver David Stringer, 82, recalled watching the queen’s coronation on a movie newsreel as a boy.

"It’s a great shame," he said. "I mean, I didn’t think about her every day, but I always knew she was there, and my life’s coming to a close now and her time has finished."

The coffin will be taken by horse-drawn gun carriage Wednesday to the Houses of Parliament to lie in state for four days before Monday’s funeral at Westminster Abbey. 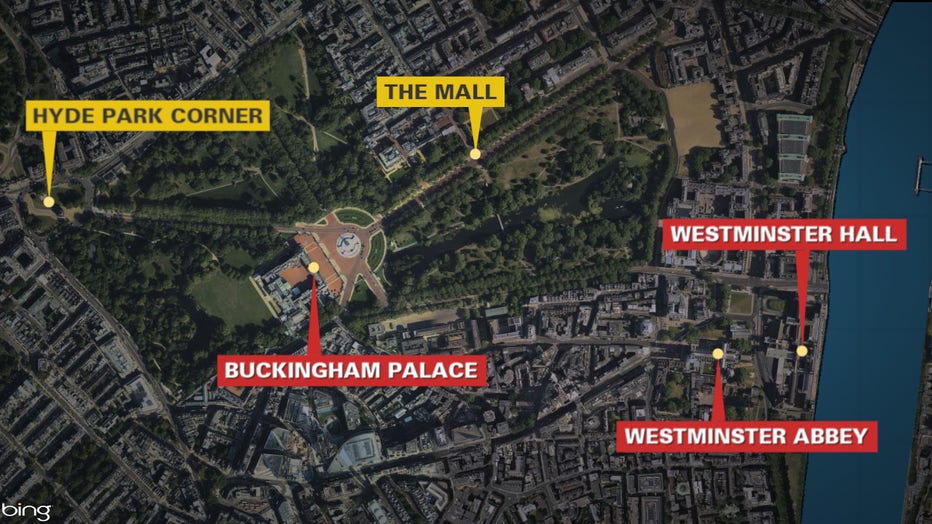 A map shows notable locations in London during the 10-day-mourning period for the late Queen Elizabeth II. Her state funeral will be held at Westminster Abbey on Sept. 19, 2022. (Credit: FOX Television Stations)

RELATED: Queen Elizabeth II's hearse was customized for her

"Scotland has now bid our Queen of Scots a sad, but fond farewell," said Scottish First Minister Nicola Sturgeon. "We will not see her like again."

The new king is making his own journey this week, visiting the four nations of the U.K. – England, Scotland, Wales and Northern Ireland – in his first days on the throne.

Earlier Tuesday, hundreds of people lined the street leading to Hillsborough Castle near Belfast, the royal family’s official residence in Northern Ireland, in the latest outpouring of affection following the queen’s death. The area in front of the gates to the castle was carpeted with hundreds of floral tributes.

Charles and his wife Camilla, the Queen Consort, got out of their car to wave to the crowd and sometimes used both hands to reach out to villagers, including schoolchildren in bright blue uniforms. Charles even petted a corgi — famously his late mother's favorite breed of dog — held up by one person, and some chanted "God save the king!" 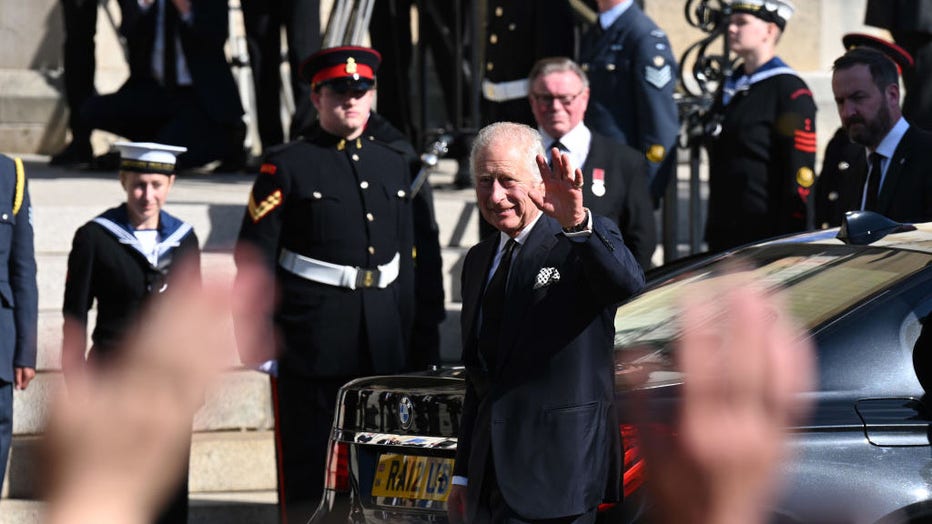 King Charles III arrives at St Anne's Cathedral in Belfast, during his visit to Northern Ireland on Sept. 13, 2022. (Photo by Michael Cooper/PA Images via Getty Images)

"Today means so much to me and my family, just to be present in my home village with my children to witness the arrival of the new king is a truly historic moment for us all," said Hillsborough resident Robin Campbell as he waited for Charles, who is on a tour of the four parts of the United Kingdom.

While there was a warm welcome in Hillsborough, the British monarchy draws mixed emotions in Northern Ireland, where there are two main communities: mostly Protestant unionists who consider themselves British and largely Roman Catholic nationalists who see themselves as Irish.

That split fueled three decades of violence known as "the Troubles" involving paramilitary groups on both sides and U.K. security forces, in which 3,600 people died. The royal family was touched personally by the violence: Lord Louis Mountbatten, a cousin of the queen and a much-loved mentor to Charles, was killed by an Irish Republican Army bomb in 1979.

For some Irish nationalists, the British monarch represents an oppressive foreign power. But others acknowledge the queen’s role in forging peace. On a visit to Northern Ireland in 2012, she shook hands with Sinn Fein deputy leader Martin McGuinness, a former IRA commander – a once-unthinkable moment of reconciliation.

Alex Maskey, a Sinn Fein politician who is speaker of the Northern Ireland Assembly, said the queen had "demonstrated how individual acts of positive leadership can help break down barriers and encourage reconciliation."

In a sign of how far Northern Ireland has come on the road to peace, representatives of Sinn Fein attended commemorative events for the queen and meeting the king on Tuesday.

Maskey expressed condolences to the king at an event in Hillsborough Castle attended by leaders from all the main political parties in Northern Ireland.

Charles responded that his mother had tried to play a role "in bringing together those whom history had separated, and in extending a hand to make possible the healing of long-held hurts."

He said he would draw on his mother’s "shining example" and "seek the welfare of all the inhabitants of Northern Ireland." 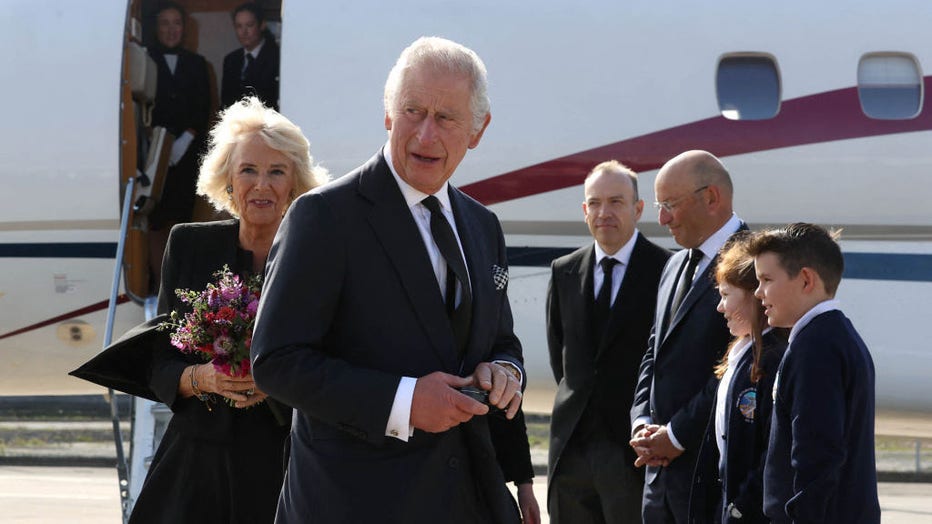 Still, not everyone was welcoming the new king.

On the Falls Road in Belfast, a nationalist stronghold, several walls are decorated with murals of Bobby Sands, an IRA member who died while on a hunger strike in prison in 1981, and others killed in the Troubles.

"No, he’s not our king. Bobby Sands was our king here," said 52-year-old Bobby Jones. "Queen never done nothing for us. Never did. None of the royals do."

Politicians from across Northern Ireland's divides attended a memorial service for the queen in Belfast. British Prime Minister Liz Truss, her Irish counterpart Micheal Martin and Irish President Michael D. Higgins were at St. Anne’s Cathedral in the center of Belfast for the Anglican "service of reflection."

Clergy praised the queen’s role in helping bring peace to Northern Ireland. Archbishop of Armagh John McDowell said she had "walked the hard road of reconciliation."

Irish leaders also attended despite tense relations between Dublin and London over Brexit. Since Britain left the European Union in 2020, the U.K. and the EU have been wrangling over trade rules for Northern Ireland, the only part of the U.K. that shares a border with a member of the bloc.

On Monday night, Charles and siblings Anne, Andrew and Edward briefly stood vigil around their mother’s flag-draped coffin at the cathedral as members of the public filed past.

The following morning, a man wearing a suit adorned with medals stood silently, bowed his head and moved on. A woman dabbed away tears with a handkerchief. Another woman with two young children in school uniforms walked slowly past the coffin.

In the line of mourners outside the cathedral, Sheila McLeay called the queen "a wonderful ambassador for our country."

"She was such an example for every single one of us. She was dignified. She was just, she was beautiful inside and out. And I have known her all of my life. And I miss her very much," she added.

Lawless and Corder reported from London.