Who is Karine Jean-Pierre?

President Joe Biden has named Karine Jean-Pierre the next White House press secretary. Jean-Pierre grew up in Queens and on Long Island.

NEW YORK - President Joe Biden has named Karine Jean-Pierre to be the next White House press secretary. She will be the first Black woman and openly LGBTQ person to serve in the role.

Jean-Pierre, the current deputy press secretary, will replace Jen Psaki, who is set to leave the post next week.

"This is a historic moment, and it's not lost on me," Jean-Pierre said. "It's a very emotional day."

Jean-Pierre grew up in Queens Village and Hempstead, Long Island. She attended Kellenberg Memorial High School in Uniondale, where she lettered in cross-country and track. The school sent FOX 5 NY a copy of Jean-Pierre's yearbook photo and wrote: "It is no surprise that Karine has continued her success in her professional career."

Years ago, Adrienne Esposito of the Citizens Campaign for the Environment hired a young Jean-Pierre, where part of her job was assisting with the protection of the nests of piping plovers.

"It really is exciting because she's someone from humble beginnings who really worked their way up to the top," Esposito said. "She was always someone who was very articulate, very can-do attitude, upbeat, and positive."

Jean-Pierre said she stands on the shoulders of many people from different communities.

"It is an honor and privilege to be behind this podium," she said. "I hope that I make people proud." 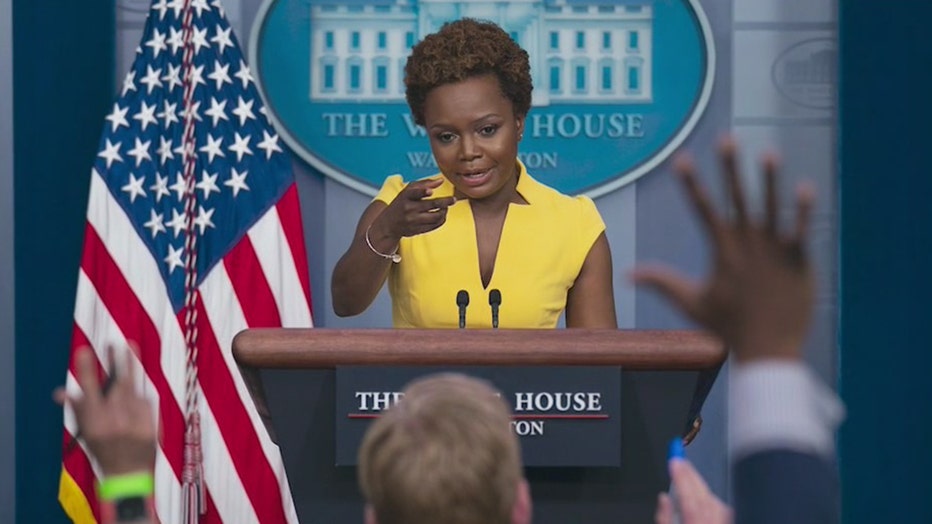 Statement by the President

"Karine not only brings the experience, talent and integrity needed for this difficult job, but she will continue to lead the way in communicating about the work of the Biden-Harris Administration on behalf of the American people. Jill and I have known and respected Karine a long time and she will be a strong voice speaking for me and this Administration."