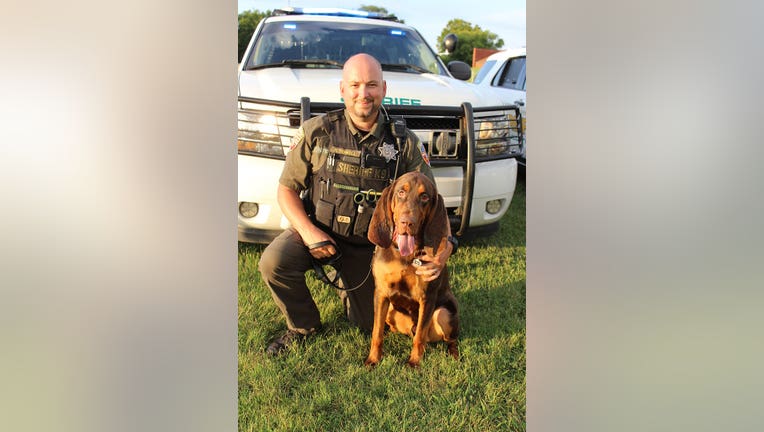 "He licked her face and she gave him a big hug," K9 Deputy Richard Tidwell said of the encounter of Fred and Kinzleigh Reeder.

Fred located Kinzleigh and her father, Nicholas Reeder, who was charged with child abuse or neglect of his daughter, according to the DeKalb County Sheriff.

Authorities allowed Fred to smell an article of clothing owned by Reeder. Fred followed a footpath from the home to a burn pile, a truck, and an outbuilding. He sniffed the door and doorknob, then sat down indicating he found the father.

Deputies forced open the door and found it was reinforced from the inside but they broke inside and found the girl in the back of the shed behind blankets along with the father.

Police said there was no ventilation and air conditioning inside the small building and very little food or water.

The two have been urinating and defecating in a five-gallon bucket.

The father was taken into custody and Kinzleigh was safely turned over to DeKalb County deputies.

Fred gets a reward of chicken to feast on when he makes a successful find. This time he received an extra treat of pizza crusts.

"I praised him and loved on him," Tidwell said. "I pulled the chicken reward out of my pocket. He ate the chicken and wanted to meet other people as if to say, ‘Look what I’ve done.’"

Reeder's bond was set at $175,000.  Along with the new charges, authorities say he had warrants for failure to appear and custodial interference.