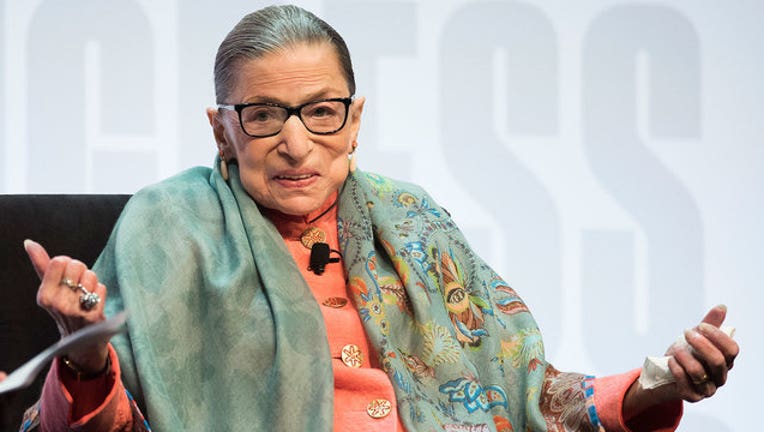 Ginsburg, 86, made the comments at the Library of Congress National Book Festival in Washington. The event came a little over a week after Ginsburg disclosed that she had completed three weeks of outpatient radiation therapy for a cancerous tumor on her pancreas and is now disease-free.

It is the fourth time over the past two decades that Ginsburg has been treated for cancer. She had colorectal cancer in 1999, pancreatic cancer in 2009 and lung cancer surgery in December. Both liberals and conservatives watch the health of the court's oldest justice closely because it's understood the Supreme Court would shift right for decades if Republican President Donald Trump were to get the ability to nominate someone to replace her.

On Saturday, Ginsburg, whose latest book "In My Own Words" came out in 2016, spoke to an audience of more than 4,000 at Washington's convention center. Near the beginning of an hour-long talk, her interviewer, NPR reporter Nina Totenberg, said: "Let me ask you a question that everyone here wants to ask, which is: How are you feeling? Why are you here instead of resting up for the term? And are you planning on staying in your current job?"

"How am I feeling? Well, first, this audience can see that I am alive," Ginsburg said to applause and cheers. The comment was a seeming reference to the fact that when she was recuperating from lung cancer surgery earlier this year, some doubters demanded photographic proof that she was still living.

Ginsburg went on to say that she was "on my way" to being "very well." As for her work on the Supreme Court, which is on its summer break and begins hearing arguments again Oct. 7, Ginsburg said she will "be prepared when the time comes."

Ginsburg, who was appointed by Democratic President Bill Clinton in 1993, did not directly answer how long she plans to stay on the court. Earlier this summer, however, she reported a conversation she had with former Justice John Paul Stevens, who retired from the court in 2010 at age 90. Ginsburg said she told Stevens: "My dream is to remain on the court as long as you did." Stevens responded: "Stay longer." He died in July at age 99.

Ginsburg said Saturday that she loves her job.

"It's the best and the hardest job I've ever had," she said. "It has kept me going through four cancer bouts. Instead of concentrating on my aches and pains, I just know that I have to read this set of briefs, go over the draft opinion. So I have to somehow surmount whatever is going on in my body and concentrate on the court's work."

Ginsburg's appearance Saturday was not her first following her most recent cancer announcement. Earlier this week she spoke at an event at the University at Buffalo, where she also accepted an honorary degree. At the time she talked only briefly about her most recent cancer scare, saying she wanted to keep her promise to attend the event despite "three weeks of daily radiation."