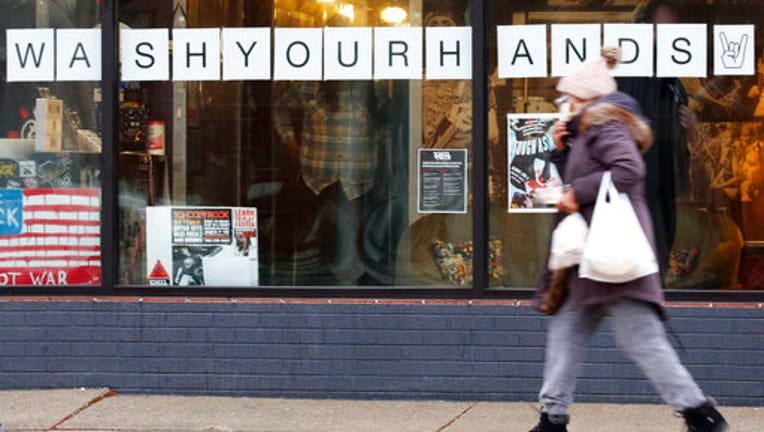 In this March 19, 2020, photo, a woman in a face mask walks past a "Wash Your Hands" sign after buying groceries in Oak Park, Ill., before a two-week "shelter in place" order goes into effect. (AP Photo/Martha Irvine)

OAK PARK, Ill. (AP) — A week ago, I was that crazy parent. “Did you tell my friends’ parents I can’t hang out?” my teen protested. Yep, I basically did.

Today, we are “sheltering in place,” an order from the mayor in our Chicago suburb, Oak Park, to leave home only for essential services until at least April 3 — and to stay 6 feet (1.8 meters) away from others when outside. Like many across the nation, we’ve already been hunkering down, working from home and home-schooling to help slow the spread of the coronavirus. Now it’s official, and even more eerily quiet.

My mind races. Two more weeks?? I try to shut it down. Just get through today.

I text my nephew in San Francisco. He’s already a sheltering veteran, as it were, with his entire state now being told to do so. New York state also is asking businesses with nonessential services to keep employees home. “Well, we just ordered delivery burritos!” he responds. I laugh. Moments of levity — the toilet paper jokes, the video with comedian Mel Brooks protected behind his glass door, the dog on Twitter who howls along with the “Law and Order” theme — are like a salve.

Then my nephew brings me back to reality. “I’m expecting a couple waves of virus rebound followed by shelter in place," he adds, ominously.

There are at least three confirmed cases of COVID-19 in Oak Park, two of them emergency room physicians. With so few tests available, surely there are others, says Tom Powers, spokesman for the village of about 52,000 in a metropolitan area with millions.

While Oak Park's population is relatively small, Powers said the hope was to encourage the rest of the governor of our state and even those elsewhere to follow suit.

“It’s almost like grab you by the lapel and shake you a little bit and say, ‘It’s not business as usual. This is different,’” Powers says. He notes that Mayor Anan Abu-Taleb owns a restaurant that is among the many businesses that have temporarily closed. “This isn't easy for him either.”

In our household, grumpiness over space, or who has the laptop, or who won’t JUST SHUT UP, is already starting to creep in, with many sheltering days to go. A slapping match between kids becomes cause for yet another family meeting. We play a game and move on.

These are tiny problems. We know we are among the lucky ones who still have jobs and our health, so far. We can still take the dog for a walk. Can still get prescriptions and groceries. Can drive in and out of town anytime we like. This isn't jail, even if it sometimes feels like it.

I chuckle as my neighbors rush home with a huge flat-screen TV in the last hours before the sheltering order begins. The grocery stores are often packed with people, more of them now wearing surgical masks. There’s still little to no toilet paper, but a liquor store in the neighboring suburb now has drive-up service. Meanwhile, the library has long been closed, as have the nearby homes of Frank Lloyd Wright and Ernest Hemingway, both museums. A makeshift sign at a local music school reads, “Wash Your Hands.”

As I work from a desk in our front window, I watch our street like a TV show. The mail carrier is now wearing latex gloves and a mask, though it falls off his face from time to time.

A group of kids from a day care that regularly walks down our block, their little hands hanging on to a rope to keep them together, dwindled from about a dozen to just three on Thursday, a day before the sheltering order took effect. Now the facility is closed, its empty cribs lined up in rows in a corner. I wonder how some of these parents are coping now. Are they doctors, police officers, grocery store clerks, pharmacists? Whatever they are doing, I hope they stay well.

From the other room, I listen to my daughters video-chatting with my 87-year-old mom in Michigan. She is a social butterfly who’s had to give up her bridge games and church. Even though my dad died four years ago, she says being alone this much has stirred up those feelings of loss all over again. Like many children, I struggle with the notion that staying away is keeping her safer.

“I am OK,” she assures me. She is a tough Depression-era kid. She knows sacrifice far more than I do.

Sheltering to protect her and the most vulnerable among us is the least we can do. So I will get through today.

Martha Irvine, an AP national writer and visual journalists, can be reached at mirvine@ap.org or at http://twitter.com/irvineap