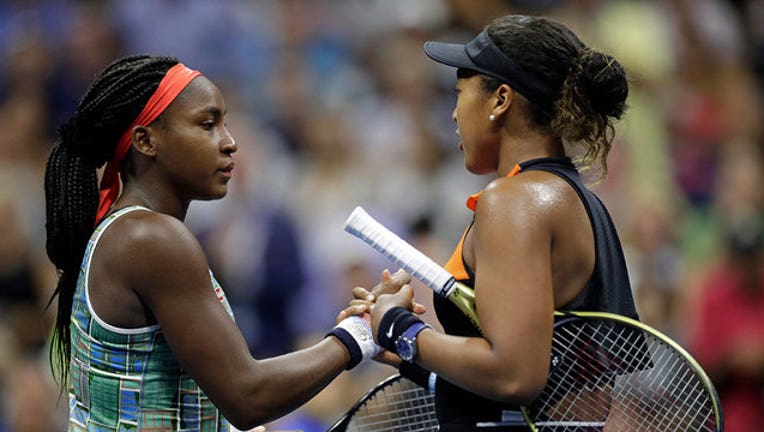 Coco Gauff, left, of the United States, shakes hands with Naomi Osaka, of Japan, after Osaka defeated Gauff during the third round of the U.S. Open tennis tournament Saturday, Aug. 31, 2019, in New York. (AP Photo/Adam Hunger)

NEW YORK (AP) - First, the tears came from Coco Gauff, as the 15-year-old American's U.S. Open came to an end against defending champion and No. 1 seed Naomi Osaka.

Then it was Osaka's turn to cry, moments after comforting Gauff with a hug and some words of encouragement Saturday night.

Gauff has generated all sorts of attention already by becoming the youngest woman to win two matches at Flushing Meadows since 1996, her follow-up to making it to the second week at Wimbledon in July. In this much-hyped showdown under the lights in Arthur Ashe Stadium that ended 6-3, 6-0 in Osaka's favor, Gauff often looked exactly like what she is: an immensely talented player who is still learning her way at tennis' top level.

She pounded serves at up to 119 mph but also double-faulted seven times.

She overcame a slow start to get within 4-3 in the opening set but also dropped the last eight games in a row.

"She told me I did amazing," Gauff said during an unusual on-court interview for a match's loser, something that was Osaka's idea, knowing the way the packed house was supporting her opponent.

"I'm going to learn from this whole match," Gauff said. "She's been so sweet to me."

Osaka's advantages in age - she's 21 - and accomplishments - she is a two-time major champion, including at the Australian Open this January - played a role. So, too, did her on-target power, which resulted in a 24-8 edge in winners.

"For me, this is the most focused I've been since Australia," said Osaka, who's had an up-and-down season since earning that trophy and is wearing a black sleeve on the left knee that's been problematic lately.

Addressing Gauff, she said: "I'm so sorry for playing you (with) this type of mentality."

When it ended, after merely 65 minutes, Gauff began to bawl on the sideline. Osaka approached her and they spoke, briefly. They're both based in Florida now and have known each other for a few years. Their fathers are friends.

"I've watched her play for so long," Osaka said. "I thought I had to get going right off the bat."

She most definitely did, producing the match's initial seven winners before Gauff got her first. It took all of 10 minutes for Osaka to lead 3-0.

When Gauff did claim a game, she did so with a couple of exclamation points in the form of aces at 105 mph, then that one at 119 mph. Osaka slumped her shoulders. The crowd roared. It seemed, fleetingly, that this might be a competitive match.

Soon enough, Osaka was edging ahead - and then pulling away, showing the same poise and power that carried her to the championship a year ago.

Gauff's body language was getting worse and worse, meanwhile, whether it was a slap of her thigh or raising her racket overhead as if contemplating a spike or the palms-up glare toward her parents and others in a courtside guest box to ask for more support.

This might very well have been the most anticipated tennis match not involving Serena Williams or the men's Big Three in years. Everyone in the sport, Williams and Roger Federer among them, has been thinking about it, talking about it, planning to watch it.

That's largely because of Gauff, who suddenly has become The Next Big Thing even though she's not yet old enough to drive, a player whose mix of skill, resilience, speed and off-court charm quickly made her a household name.

It's also because the player on the other side of the net was Osaka, born in Japan and raised in the U.S., young enough herself to only own three tour-level titles - and talented enough that two of them came at Grand Slam tournaments. That includes her breakthrough in New York a year ago, when she outplayed Williams in a memorably chaotic final that ended with spectators booing and both women in tears after the 23-time major champion got into a lengthy dispute with the chair umpire.

Next for Osaka is a match Monday against 13th-seeded Belinda Bencic of Switzerland with a quarterfinal berth at stake. Bencic advanced when the woman she was supposed to face in the third round, Anett Kontaveit of Estonia, withdrew with a viral illness.

Other matchups Monday will be American qualifier Taylor Townsend vs. No. 15 Bianca Andreescu of Canada, American wild-card Kristie Ahn vs. No. 25 Elise Mertens, and No. 23 Donna Vekic of Croatia vs. No. 26 Julia Goerges.

Moving into the men's fourth round with victories Saturday were three-time champion Rafael Nadal and 2014 title winner Marin Cilic, who are the only past Grand Slam champs on their half of the draw and now must face each other. Cilic, the No. 22 seed, overcame his own 17 double-faults and withstood 40 aces from 14th-seeded American John Isner to win 7-5, 3-6, 7-6 (6), 6-4.

Heading to practice before her 6-4, 6-4 victory over 2018 Australian Open champion and two-time U.S. Open runner-up Caroline Wozniacki on Saturday, Andreescu ran into Gauff.

Just a quick chat between a couple of teens who are showing that the up-and-coming generation of players could have a lot of good things in store.

"That was actually the first time we met face-to-face," Andreescu said. "I told her: Congrats on all the success. Keep killing it. 'NextGen' is here."