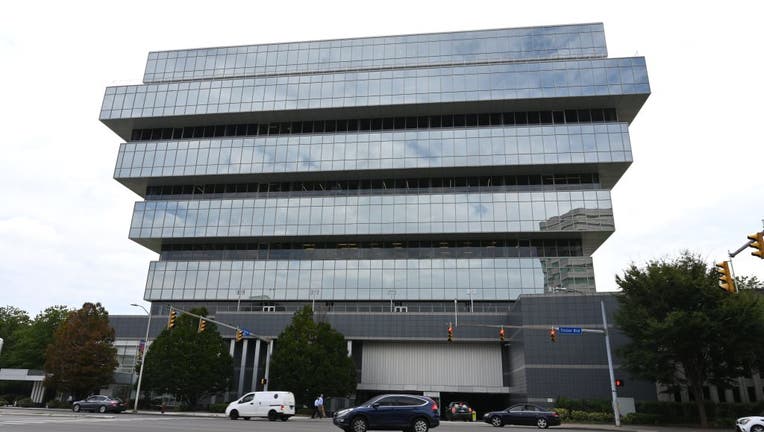 Headquarters of Purdue Pharma LP, the maker of the painkiller OxyContin, is seen in Stamford, Connecticut September 16, 2019. - Purdue Pharma has filed for bankruptcy in a settlement agreement in a move it hopes will head off further legal proceeding

A judge will halt lawsuits against Purdue Pharma and its owners for six months in hopes of finalizing a settlement over the OxyContin maker's role in the national opioid crisis, he said Friday.

In a hearing, U.S. Bankruptcy Judge Robert Drain strongly brushed aside the argument from a group of state attorneys general that lawsuits against members of the wealthy Sackler family would be essential to getting accountability in the case.

His decision does not mean that a tentative settlement struck between the company and about half the states would become a final agreement.

How much members of the Sackler family should be held accountable for the role Purdue Pharma played in the crisis was at the center of the hearing.

State attorneys general are evenly divided over whether to accept terms offered by Purdue to settle some 2,600 claims against it. About half of them say the proposed deal is too lenient to family members who siphoned billions out of their privately held company and stashed much of it overseas.

Those attorneys general are pressing separate state claims against the Sacklers and want those cases to continue even as Purdue's bankruptcy case plays out.

"If the States accepted the offer, there would never be a trial to determine the Sacklers' liability for one of the greatest public health crises of our time," the attorneys general who oppose the settlement terms said in a filing last week.

Its signature painkiller, OxyContin, made Purdue the biggest name in a case that consolidated the hundreds of lawsuits by local governments, Native American tribes and other entities under a federal judge in Cleveland. The company's bankruptcy filing in New York last month came after it negotiated a tentative deal in that litigation with a group of attorneys general, although only half the states have agreed to it.

No longer part of the Cleveland case, Purdue and the Sackler family are hoping to resolve all lawsuits against them through the bankruptcy process; Sackler family members face hundreds of lawsuits in state courts, including about two dozen brought by state attorneys general. The biggest immediate question looming over the bankruptcy case is whether the judge will allow those cases to proceed.

A ruling in favor of the attorneys general who want to push forward with their lawsuits could imperil the tentative settlement.

Under that proposal, members of the Sackler family would give up control of Purdue, which would continue to operate as a trust with all profits going into the settlement. The deal would include the value of overdose antidotes and a treatment drug under development, and the Sackler family would kick in at least $3 billion. The exact amount above that depends on what the family would make by selling its Mundipharma international drug businesses. In all, the deal could be worth as much as $12 billion over time.

Twenty-four states and lawyers representing local governments have agreed to the proposed deal, while another 24 states and more than 500 local and tribal governments oppose it. Two states, Kentucky and Oklahoma, settled lawsuits previously with Purdue.

Purdue has said in court filings that if the separate lawsuits against members of the Sackler family are allowed to go ahead, it could mean the family would not be willing or able to pay the money it has committed to the settlement.

The objecting states say the Sacklers have plenty of money. In sworn testimony, a restructuring consultant for Purdue said family members had received between $12 billion and $13 billion over time from the company.

Those states say the federal bankruptcy judge cannot stop their lawsuits against the Sacklers because doing so would interfere with states' constitutional powers to enforce laws to protect the public's health, safety and welfare. Marc Hamroff, a lawyer who has represented creditors in several high-profile bankruptcy cases, said the judge's decision could turn on that argument.