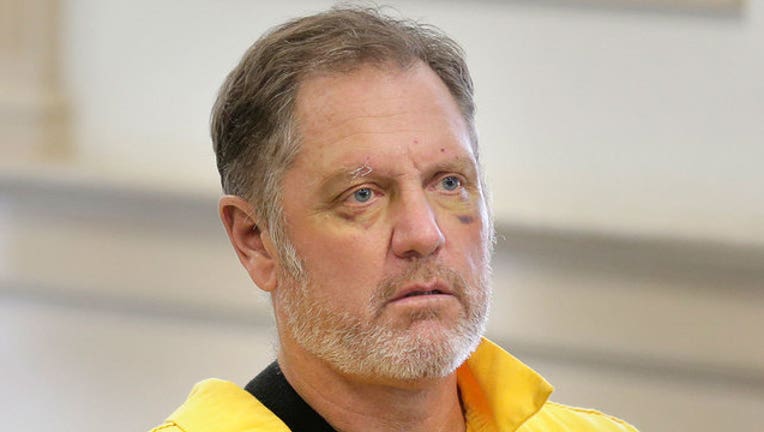 Michael Barisone appears in court in Morristown, N.J., Wednesday, Aug. 14, 2019. The former Olympian was charged with shooting and wounding a woman at a farm where he trained other riders will be detained pending trial. (AP Photo/Seth Wenig)

MORRISTOWN, N.J. (AP) - A judge declined Wednesday to release a former Olympic equestrian charged with shooting and wounding a woman at his training center last week.

Michael Barisone is charged with two counts of attempted murder in the shooting last week at his farm in western New Jersey where he trains horses and riders.

The 54-year-old appeared in court wearing a yellow prison jumpsuit and with his left arm in a sling, the result of a confrontation with the woman's fiance, who wrestled him to the ground after Barisone allegedly shot at him, too, but missed.

Since New Jersey eliminated cash bail, prosecutors must show why defendants charged with some crimes, including attempted murder, should not be released.

On Wednesday, state Superior Court Judge Stephen Taylor said Barisone still poses a danger to others, and possibly himself. He noted police reports that said Barisone kept repeating, "I had a good life" as he was being arrested.

"That's a rather fatalistic statement on his part, and one that is troubling to the court," Taylor said. "I think he does pose a continuing danger, perhaps to himself and certainly to the victims."

Meanwhile, an attorney for Barisone referred several times to the victims as "the alleged victims," and said they, in fact, were the ones who threatened and harassed Barisone.

The couple had been living and training horses at Barisone's property since last year but had violated a verbal agreement to leave once they were finished with the training, attorney Jeffrey Simms said.

The dispute, he said, turned ugly, and the couple even made a false claim of child abuse pertaining to the two young children of Barisone's partner who lived with him.

"They said, 'We're going to destroy you,'" Simms said, adding that the shooting occurred soon after a child services investigator arrived at the property.