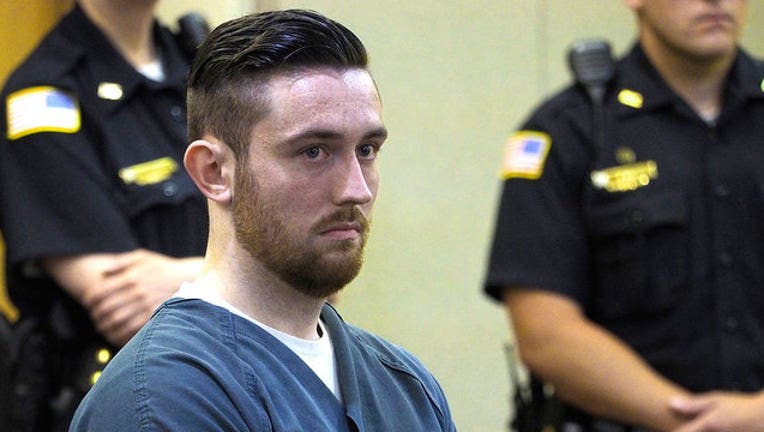 Preston Taylor was sentenced to 18 years in prison Friday, June 28, 2019, for helping to dump the body of childhood friend Sarah Stern off the Route 35 bridge in Belmar, NJ. (Patti Sapone/NJ Advance Media via AP, Pool)

FREEHOLD, N.J. (AP) - A judge has rejected a bid to reduce the 18-year sentence of a man who acknowledged helping another man convicted of strangling a former classmate and throwing her body off a New Jersey bridge.

Superior Court Judge Richard English defended the term he imposed on 22-year-old Preston Taylor although it was longer than the 15-year term prosecutors had sought in the murder of Sarah Stern, who disappeared in December 2016, the Asbury Park Press reported.

English said Friday his sentence was well within the bounds of the 10- to 20-year range specified in the plea agreement and called it "a fair sentence that was in the interest of justice."

Taylor testified that he helped his roommate, Liam McAtasney, throw Stern's body off the Route 35 bridge between Neptune and Belmar. Monmouth County prosecutors said McAtasney strangled the 19-year-old victim at her Neptune City home during a robbery and then dumped her body, leaving her car on the bridge to make it look like a suicide. Stern's body has never been found.

Defense attorney John Perrone, who vowed to appeal the ruling, argued that the judge incorrectly applied aggravating factors such as a defendant's risk of committing another offense. He also cited his client's cooperation in McAtasney's conviction on murder, robbery and other counts including desecration of human remains. McAtasney was sentenced in June to life in prison without parole.

English acknowledged Taylor's cooperation but also noted that he only starting talking to authorities after McAtasney's videotaped remarks prosecutors called a confession led to the arrest of both roommates.

The judge said he "didn't see how I couldn't" conclude that Taylor was at risk to re-offend based on his role in Stern's death and the scheme to steal drugs after the murder.

"He (Taylor) is going to get out," English said. "Sarah Stern is gone."

"It just doesn't make any sense," he said. "We had a just decision. I'll hold to the same statement I said early on that it (the sentence) should have been longer."