Campaigns for various elected positions in the 2022 general election are well underway, but some of the campaign signs that are being put up across the Phoenix area are not really meant to advertise a candidate: they are being posted by non-candidates as practical jokes. FOX 10's Brian Webb reports.

PHOENIX - As the 2022 general election nears, political signs have popped up on most major intersections across the Phoenix area, but a new trend is emerging, where regular people are posting their own political signs, as practical jokes.

How did it begin?

A man named Tyler Watson kicked things off, with a sign showing him crossing his arms for no particular reason.

Others have since joined in Watson's footsteps, and the signs are mixed in with other serious political signs. 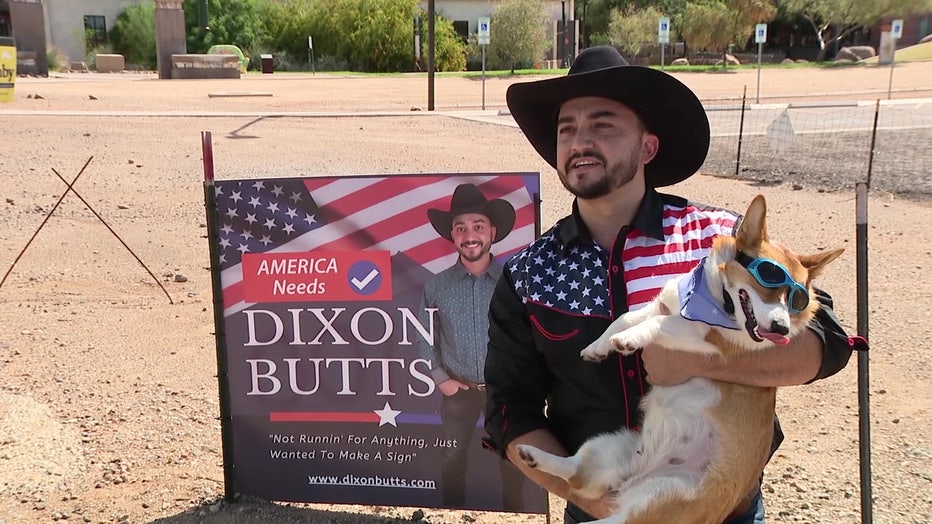 A man known as 'Dixon Butts.' The person did not want to reveal his true identity.

One of the people who made joke political signs called himself "Dixon Butts" on the signs that featured him with a sidekick named Dixie.

On the signs, "Butts" called himself "a man of the people."

"I was driving down the road, realized it's election season, and thought the none of signs out here, and I gotta do something about it," said ‘Butts.' The man did not reveal his true identity.

Another person who made joke political signs is Christian Ramirez. His signs show him holding a high-powered rifle. Some of the signs read "endorsed by ‘your mother,'" while other signs feature words that we can't repeat.

As for "Butts," people may see more of him in future elections.

"There’s about 1,000 people online that said they would write me in for something, so if the people want DIxon, I’m in a position to give it to him."

"Butts" is hoping to cash in on the fun he created. He is selling bumper stickers and t-shirts on a website, under his character's name. He has already placed a second order to keep up with the demand.