Jurors resumed deliberations Monday in the defamation trial between Johnny Depp and his ex-wife Amber Heard inside the Fairfax, Virginia, courthouse.

FALLS CHURCH, Va. - A Virginia jury will pick up deliberations again Wednesday in Johnny Depp’s $50 million libel trial against his ex-wife Amber Heard, a closely-watched case that has drawn millions of viewers online and much public debate surrounding the claims.

Testimony throughout the six-week trial provided an ugly glimpse into the couple's seemingly toxic relationship and captivated the public, with some fans even camping out and spending tens of thousands of dollars for a chance to witness the court proceedings in person.

Both sides gave their closing arguments on Friday and the civil case went into the hands of the seven-person jury. Depp sued Heard for libel in Fairfax County Circuit Court over a December 2018 op-ed she wrote in The Washington Post describing herself as "a public figure representing domestic abuse."

The article never even mentions Depp by name, but his lawyers say he was defamed nonetheless. Most of the article discusses public policy as it relates to domestic violence, and Heard's lawyers say she has a First Amendment right to weigh in. 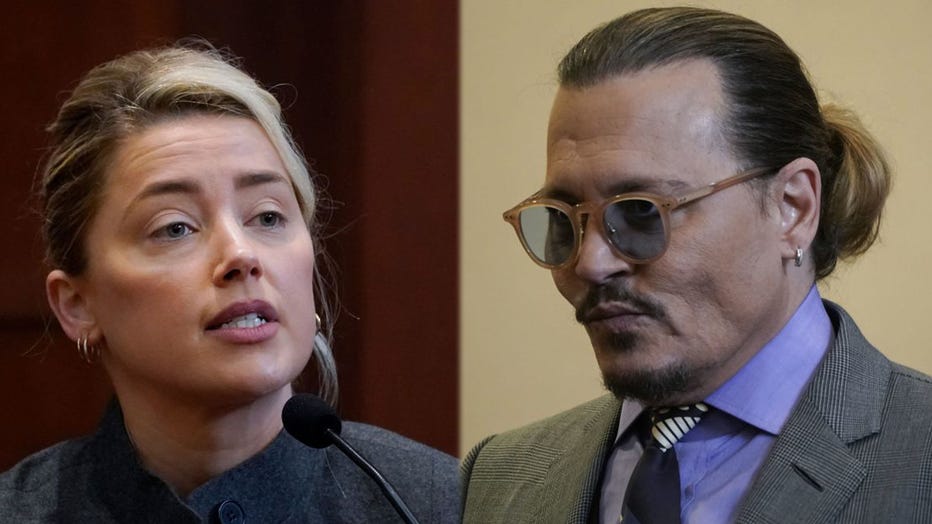 In the first passage, Heard wrote that "two years ago, I became a public figure representing domestic abuse, and I felt the full force of our culture’s wrath." Depp’s lawyers called it a clear reference to Depp, given that Heard publicly accused Depp of domestic violence in 2016 — two years before she wrote the article.

In a second passage, she stated, "I had the rare vantage point of seeing, in real-time, how institutions protect men accused of abuse." Depp's lawyers are also seeking damages over a headline that appeared above the online version of the article, even though Heard didn't write it.

Heard also filed a $100 million counterclaim against the former "Pirates of the Caribbean" star after his lawyer called her allegations a hoax.

During the trial, Heard testified about more than a dozen episodes of physical and sexual assault that she said Depp inflicted on her. Depp says he never struck Heard and that she concocted the abuse allegations. He has said he was the one physically attacked by Heard multiple times.

What does the Johnny Depp-Amber Heard trial jury have to decide?

The jury is now tasked with deciding whether those passages in the Post are defamatory. And the verdict form gives them step-by-step instructions on how to determine that. They also must come to a unanimous decision for a verdict.

Because both Heard and Depp are Hollywood actors, they're considered public figures under the law — meaning there's a higher bar to clear to prove defamation. Depp has to prove that Heard acted with actual malice, meaning she knew she was lying when she made her claims or she acted with reckless disregard for the truth.

And though the counterclaim has received less attention at the trial, Heard's lawyer Elaine Bredehoft said it provides an avenue for the jury to compensate Heard for the abuse Depp inflicted on her even after they split by orchestrating a smear campaign.

If the jury finds that either party defamed the other, they have to calculate how much that defamation damaged the hurt party financially. The jury also has to consider the value of reputation loss.

When is the verdict for the Depp-Heard trial?

The seven-person civil jury began its deliberations at 3 p.m. Friday and finished for the day about two hours later.

They resumed just after 9 a.m. on Tuesday, looking at all the testimony, pictures, and videos submitted into evidence, then wrapped up for the day at 5 p.m. They'll resume Wednesday.

The judge said the jury will deliberate into the evening each day that they do their work, but not over weekends or holidays.

What happened in court Tuesday?

Tuesday, Depp's attorneys asked Judge Penney Azcarate to instruct the jury to disregard a portion of the closing argument made by Heard's attorney.

In their written motion, Depp's attorneys said Heard's lawyer told the jury that its decision in the case would send a message to "every victim of domestic abuse everywhere." Heard attorney Benjamin Rottenborn told the jury that a ruling against Heard "sends a message that no matter what you do as an abuse victim, you always have to do more."

"No matter how honest you are about your own imperfections and your own shortcomings in a relationship, you have to be perfect in order for people to believe you. Don't send that message," Rottenborn said.

Depp's attorneys argued that Rottenborn's argument improperly asked the jury to focus on a larger social objective than the case they are being asked to decide.

"Such argument by Ms. Heard’s counsel improperly invites the jury to decide the case ‘based on passion and prejudice’ and a specific jury instruction is necessary to cure this impropriety," Depp's lawyers argued.

The judge told Depp's attorneys in court that she would not entertain the motion because the case is in the hands of the jury now.

A public relations firm for Heard did not immediately respond to a request seeking comment on the motion.

The two met in 2009 while filming "The Rum Diary." Despite their 22-year age difference, Heard testified there was an instant connection when Depp met with her as he considered her for a role in the film.

"I was a no-name actor. I was 22. He was twice my age. He’s this world-famous actor and here we are getting along about obscure books, old blues" music, testified Heard, who’s now 36.

While they had chemistry during the filming of the movie, she said they didn’t begin dating until doing a press tour for the film’s release in 2011. At the outset, they kept their relationship a secret.

Heard testified that the first act of physical abuse against her by Depp happened in 2013.

The two married in February 2015 reportedly at their Los Angeles home, but the nuptials didn’t last long. In May 2016, Heard filed for divorce and obtained a temporary restraining order against Depp. Their divorce was finalized in early 2017, with Heard saying she was going to donate her $7 million settlement to charity.

Heard’s op-ed was published in The Washington Post in 2018. In 2019, Depp filed a $50-million defamation lawsuit against her. Heard countersued Depp for $100 million.

In order to rule on Depp’s libel claim, the jury must decide whether the facts in the case prove Depp, in fact, abused Heard. Depp said he never physically abused her, while Heard said she was assaulted on more than a dozen occasions. Depp also alleged he was the victim of abuse inflicted by her.

Heard testified the first act of physical violence against her happened in 2013. She said it happened when the two were talking about one of Depp’s tattoos, and she said she made the mistake of laughing at it.

Depp, while he was on the stand, flatly denied it occurred.

The tattoo in question was one that used to say "Winona Forever," which Depp got when he was dating actor Winona Ryder. He had it altered to "Wino Forever" when they broke up.

Depp and Heard both agreed the worst violence occurred in March 2015 in Australia while Depp was shooting the fifth "Pirates of the Caribbean" movie, but that’s where their agreement of the account ends.

Heard said Depp sexually assaulted her with a bottle of Maker’s Mark bourbon as part of an alcohol-fueled rage that included accusing her of infidelity with a co-star.

Depp said he was the victim of violence because Heard was irate over a pending post-nuptial agreement and his struggles with sobriety.

Depp testified Heard threw a liquor bottle at him twice, and that one smashed against his hand while it rested on a counter and severed the tip of his middle finger.

Photos of the aftermath showed Depp wrote vulgar messages to his wife in blood on the walls of the house. Jurors also saw contemporaneous text messages Depp sent to others in which he said he cut off his own finger. Depp said he made up that story to protect Heard and avoid police involvement.

A hand surgeon later testified that Depp could not have lost the tip of his middle finger the way he told jurors it happened.

Why is Depp-Heard trial happening in Virginia?

The trial is taking place in Fairfax County Circuit Court in Fairfax, Virginia.

Heard’s lawyers had sought to have the case tried in California, where the actors reside. But a judge ruled that Depp was within his rights to bring the case in Virginia because The Washington Post’s computer servers for its online edition are located in the county.

Depp’s lawyers have said they brought the case in Virginia in part because the laws there are more favorable to their case.

This story was reported from Cincinnati. The Associated Press, Megan Ziegler and FOX 5 DC contributed.