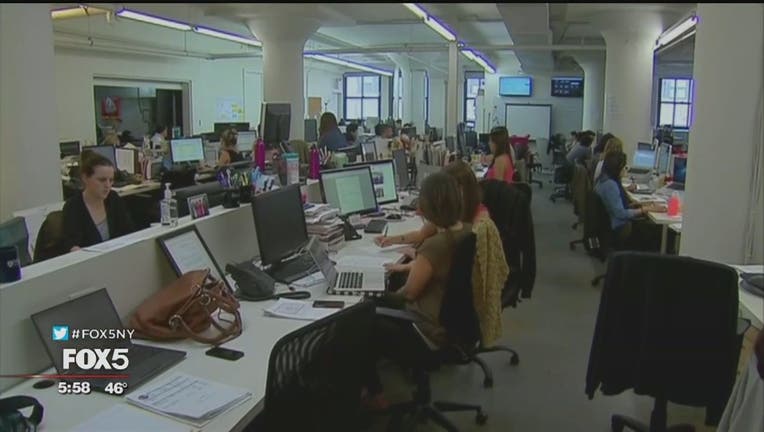 People work in an office.

NEW YORK - An aging population and dramatic advances in technology and energy will determine the fastest-growing jobs in the U.S. over the next decade, according to an updated forecast released Tuesday by the U.S. Bureau of Labor Statistics.

BLS' top-10 list of fastest-growing American occupations between 2019 and 2029 is comprised of six health care-related jobs and three tech/green energy-related jobs, though projections do not include the impact of the coronavirus pandemic, BLS said.

"Factors that are expected to contribute to the large increase [in the health care sector] include increased demand to care for the aging baby-boom population, longer life expectancies, and continued growth in the number of patients with chronic conditions," a press release from the Bureau reads.

There is not just the obvious "demographic bulge" with baby boomers, Rosenbaum said, but Americans are "also living longer and need more advanced care," thus increasing the need for more health care jobs unrelated to COVID-19 over the next decade.

He also said that even though the Bureau's data does not take the impact of COVID-19 into account, the virus will likely have a large impact on growing job trends in the near future.

"The [health care] industry as a whole had a shortage of employees before coronavirus," Rosenbaum said, adding that the pandemic has opened up health care job opportunities not only directly related to the virus itself but related to medical jobs that were moved around or created as a second-hand result of COVID-19.

"The really interesting question becomes: Can folks move from areas of the economy that are shrinking like restaurants, hospitality [and] retail to areas like health care and tech?" he said.

Medical jobs are moving out of hospitals, and more employers in the health care industry are hiring people who don't have advanced medical degrees, especially for positions like health and personal aides, Rosenbaum explained.

Additionally, an increasing number of states and local governments are looking to cut some of the red tape that holds people back from moving out of dying industries and getting new jobs within health care, he said.

"Folks are coming [onto Arena] ... from outside the health care industry at a rate of about 500,000 per year," Rosenbaum said of his platform, which works largely with health-care companies.

The tech and green energy sectors will also see a significant increase in U.S. job demand due to rapid economic growth, even as the manufacturing sector is projected to lose 444,800 jobs, according to the BLS release.

Mike Lenox, professor at the Darden School of Business and author of the book "Can Business Save the Earth? Innovating Our Way to Sustainability," said the demand for renewable energy has already been surging for the past decade.

The surge comes not only from demand to address climate-change concerns but because costs for renewable energy — particularly, wind and solar — sources are falling.

"As those costs come down, the industry will increase and accelerate," he said.

Bloomberg's 2019 New Energy Outlook report found that wind and solar energy sources are "now cheapest across more than two-thirds of the world" and will "undercut commissioned coal and gas almost everywhere" by 2030.

And while BLS expects a decrease in manufacturing jobs, Lenox said the addition of new electric-vehicle and EV battery manufacturing jobs be a trend to watch. There will be increasing crossover between tech and sustainable solutions over the next decade, he added.

The tech sector has seen a huge surge in demand during COVID-19 as people have become more reliant on digital entertainment, communication and retail. That surge is expected to continue beyond the pandemic as tech becomes an increasingly integral part of Americans' everyday lives.

And the people who create the digital tools and platforms people use every day "don't have to be Stanford-educated" the way they used to, Rosenbaum said.

Overall, BLS expects U.S. employment to increase by about 6 million jobs over the next decade, which represents growth of 0.4% — slower than the 1.3% growth between 2009 and 2019 that resulted from the 2008 recession. GDP growth is also expected to be slower, according to a press release.