Jill Biden offered a personal glimpse into her family’s struggles and vouched for her husband’s ability to lead the nation through adversity during remarks at the Democratic National Convention on Tuesday night.

WILMINGTON, Del. (AP) - Jill Biden offered a deeply personal and hopeful endorsement of her husband as a man who can lead the nation through adversity during the Democratic National Convention Tuesday night, pledging to the nation that if Joe Biden is elected president, America's classrooms “will ring out with laughter and possibility once again.”

Speaking from the Wilmington, Delaware, high school classroom where she taught English years ago, Jill Biden described “the anxiety that echoes down empty hallways” and the uncertainty that’s come as schools grapple with whether to resume in-person teaching as the coronavirus pandemic rages on.

“The burdens we carry are heavy, and we need someone with strong shoulders,” she said. “If we entrust this nation to Joe, he will do for your family what he did for ours: Bring us together and make us whole, carry us forward in our time of need, keep the promise of America, for all of us.”

Biden's remarks capped off the second night of the convention. In her speech, she drew parallels with her husband's experience leading his family through personal adversity and what she described as his ability to lead the nation through its current crises.

RELATED: 5 takeaways from the 1st night of the Democratic National Convention

During their decades in public life, both Jill and Joe Biden have faced considerable personal loss. Shortly after his election as senator, in 1972, Joe Biden’s first wife and infant daughter were killed in a car crash, leaving him to raise his two sons alone. He married Jill about four years later, but the two faced tragedy together when Biden’s son Beau died of brain cancer in 2015.

Both speak openly on the campaign trail about the challenges they’ve experienced, and on Tuesday night, Jill Biden spoke about what it takes to “make a broken family whole”: “The same way you make a nation whole. With love and understanding — and with small acts of compassion.”

She told viewers that her husband's “strength of will is unstoppable” and “his faith is unshakable” because “his faith is in you — in us.”

The speech was her biggest yet, and marked a considerable evolution for a woman who is a self-described introvert and initially a reluctant political wife. In her memoir, she writes of giving her first political speech and having no desire to “give any speeches, anytime, anywhere — just the thought of doing so made me so nervous I felt sick.”

Bernie Sanders offers his support and advice during the 2020 DNC.

But after eight years as the vice president’s wife, and then giving speeches and appearing at events after her husband left office, Jill Biden has become one of her husband’s most prominent surrogates. She has appeared in virtual events in more than 17 cities since May and is one of the campaign’s primary surrogates to Latino voters, headlining town halls and holding frequent calls with members of the Congressional Hispanic Caucus.

In one week this month, Jill Biden appeared at a science-focused fundraiser, an event with Joe Biden’s faith coalition and a gathering focused on LGBTQ youth, speaking with emotion and fluency about her husband’s plans for each constituency.

She’s also one of his most protective surrogates, a quality she writes about in her memoir — and one that was on full display during a Super Tuesday speech Joe Biden gave in March when a handful of protesters rushed the stage. Jill moved between the protesters and her husband, pushing a protester away. 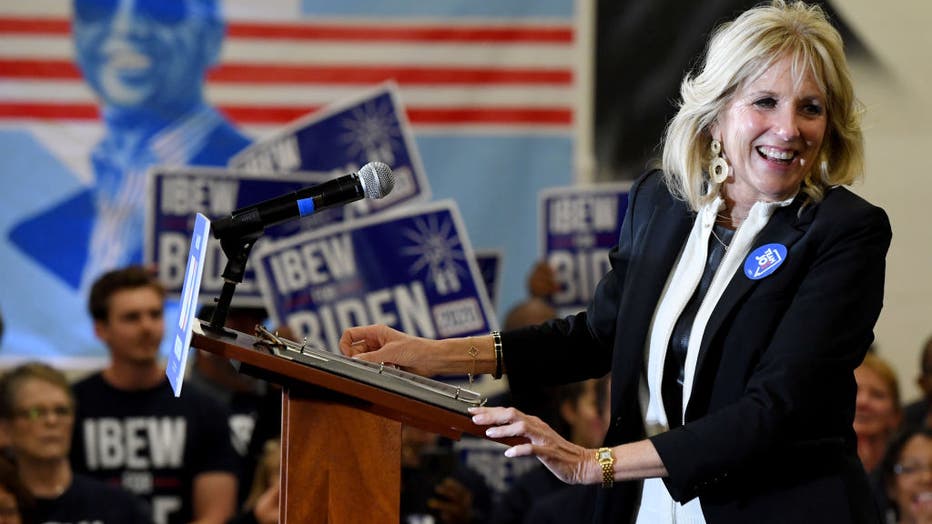 RELATED: Michelle Obama at virtual DNC: Vote 'like our lives depend on it'

Jill Biden married the presumptive Democratic presidential nominee in 1977, and helped raise his surviving sons, Beau and Hunter, before giving birth to daughter Ashley in 1981.

As Joe Biden commuted from Delaware to Washington while serving as a senator, his wife built a career as a teacher, ultimately earning two master's degrees and then a doctorate in education from the University of Delaware in 2007.

Along the way, former coworkers say, Jill Biden, 69, became one of her husband's most valuable political advisers, someone whose opinion was paramount in most of his biggest decisions, both political and personal. She was skeptical of his 1988 presidential campaign but pushed him to run again in 2008, according to her memoir.

After Joe Biden became the presumptive nominee this year, she played a prominent role in auditioning many of the vice presidential candidates, appearing with them at various events. During a recent interview on CBS, Jill Biden acknowledged that she and her husband “talked about the different woman candidates.”

“But it’s gotta be Joe’s decision,” she added.

Those who know Jill Biden best say she’s slightly perplexed at being called one of her husband’s most significant “advisers,” insisting that her relationship with her husband is far deeper and more nuanced than such a label would suggest.

“He’s got plenty of political advisers. That’s not what she is,” said Cathy Russell, who was Jill Biden’s chief of staff during the Obama administration and is now a vice chair on the campaign. “She is his spouse, and she loves him, and she talks to him about all sorts of things, but she has a unique role, and it’s not being a political adviser. That’s not her thing.”

Jill Biden continued to teach at a community college while her husband was vice president, against the advice of aides at the time.

“Being a teacher is not what I do but who I am,” she wrote in her memoir, describing “scrambling into a cocktail dress and heels” in the bathroom at her school to make it to a White House reception, or grading papers on Air Force Two, with relish.

Indeed, she has said she plans to continue teaching if she becomes first lady.