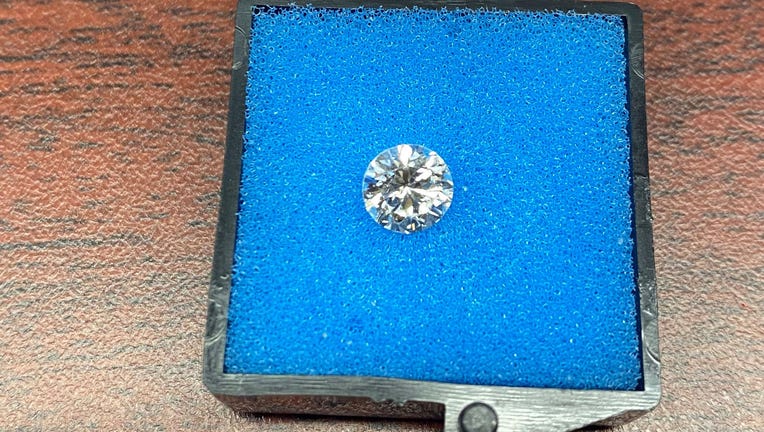 A TSA agent at JFK Airport found a missing diamond from the engagement ring of a newlywed couple traveling to Guam. (TSA at JFK)

NEW YORK - A newlywed couple from Queens had a rocky start to their pandemic-delayed honeymoon after losing the diamond from their engagement ring.

"My wife was crying hysterically as we did not know what happened, nor did we know how to approach the situation," Amir Khan Durrani wrote in an email to TSA at JFK Airport.

Last month, the Durranis were at JFK on their way to Guam when they realized over a cup of coffee that the diamond had fallen out after going through a security checkpoint at Terminal 7.

Durrani raced back to the checkpoint and alerted the TSA officers.

"Everyone was extremely kind and helped me as much as they could to locate the lost diamond," he said. "I told them that I knew this was not their job" to help find a lost diamond, although "everyone present helped look for the diamond to no avail," he recalled.

The couple headed to Guam heartbroken over their loss.

Secrets in the Diamond District

But once they arrived, they had messages on their cell phone from TSA informing them that a diamond had been found. The couple sent a photo and it matched the description of the stone that was discovered.

Four hours later, a TSA officer had spotted the diamond at the checkpoint line. The stone was on the floor between the metal detector and the X-ray machine.

"The shine caught my eye. I was like, ‘wow, I just found this diamond!," said Officer John Killian.

"Our trip went from a chaotic moment to one at peace," said Durrani in an email thanking the JFK TSA team for their efforts in locating and returning the diamond. "I would like to commend everyone and their efforts for finding our diamond and safekeeping it before our return back to New York. I want to mention deep down in my heart, that this moment put us in relief. I hope everyone understands how much this meant to my wife and me."

When the couple returned they picked up the diamon but before showing the ring with the setting to confirm that it was a fit.