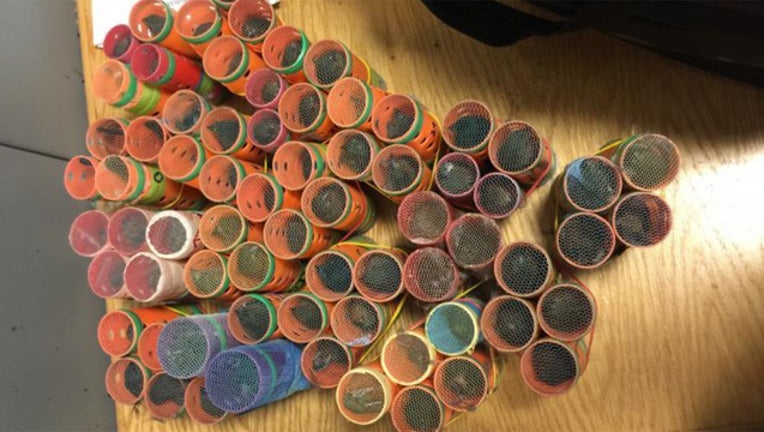 An image provided by U. S. Customs and Border Protection shows the live finches in hair rollers.

NEW YORK (FOX 5 NY) - Only in New York... A passenger who landed at John F. Kennedy International Airport was caught trying to sneak 70 live finches into the country in their carry-on bag.

U. S. Customs and Border Protection says that agriculture specialists stopped an arriving passenger on a flight from Georgetown, Guyana on Saturday.

During an inspection, agents discovered 70 live finches concealed within hair rollers in a black duffel bag.

The finches were detained under quarantine and turned over to United States Department of Agriculture Veterinary Services.

Finches are often kept as pets.  Birds can carry dozens of diseases, from encephalitis to E.coli and spread them through droppings.

A 2015 outbreak of Highly Pathogenic Avian Influenza in the U.S., commonly known as bird flu, resulted in the culling of 50 million commercial turkeys and chickens and $850 million in damages.

"CBP Agriculture Specialists are the first line of defense to prevent the introduction of animal diseases that have the potential to cause significant damage to the nation’s agricultural economy," said Troy Miller, Director, Field Operations, New York Field Office.