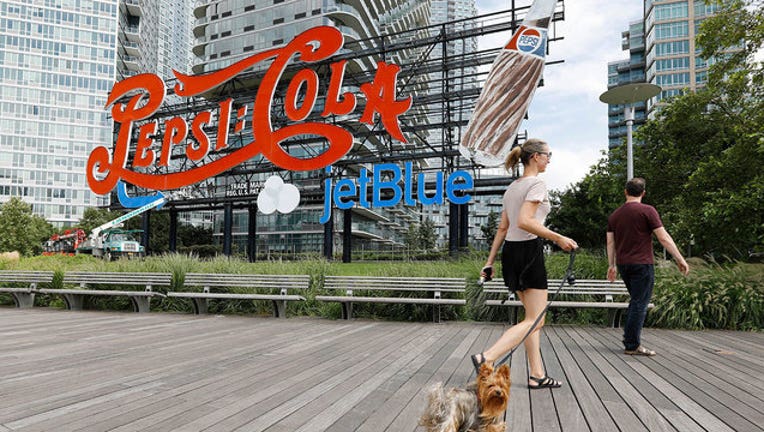 A lighted JetBlue logo has been added to the landmarked Pepsi-Cola sign in the Long Island City neighborhood of the Queens borough of New York, Wednesday, Aug. 21, 2019. (AP Photo/Richard Drew)

NEW YORK (AP) - A landmark Pepsi sign along New York City's East River will also promote JetBlue for the next six weeks, and critics are finding it hard to swallow.

An illuminated blue logo advertising the airline was added to the 60-foot (18-meter) Pepsi-Cola sign in Long Island City, Queens, this week. The new signage celebrates a partnership in which JetBlue will serve PepsiCo drinks on flights.

The city Landmarks Preservation Commission issued a permit for the JetBlue logo through Oct. 1. But City Councilman Jimmy Van Bramer, a Democrat who represents the area, says some constituents are complaining. Van Bramer says that even a temporary JetBlue sign "shouldn't be there."