Falwell confirmed his departure on Aug. 25, a day after the school said he had submitted, then rescinded his resignation.

RICHMOND, Va. - Jerry Falwell Jr. said Tuesday that he has resigned as head of evangelical Liberty University because of ongoing controversies about his wife’s sexual involvement with a younger business partner and in the wake of a social media photo that caused an uproar.

Falwell’s exit marks a precipitous fall from power for one of the country’s most visible evangelical leaders and ardent supporters of President Donald Trump. The Lynchburg, Virginia, university was founded by Falwell’s late father, the Rev. Jerry Falwell Sr.

Falwell confirmed his decision in an interview with The Associated Press. According to the school, he initially offered to resign Monday, hours after the Reuters news agency published an interview with a man who said that he had a yearslong sexual relationship with Becki Falwell and that Jerry Falwell participated in some of the liaisons as a voyeur. Falwell later reversed course, and began telling news outlets he had no intention of leaving. Liberty University spokesman Scott Lamb did not respond to a request for comment Tuesday. 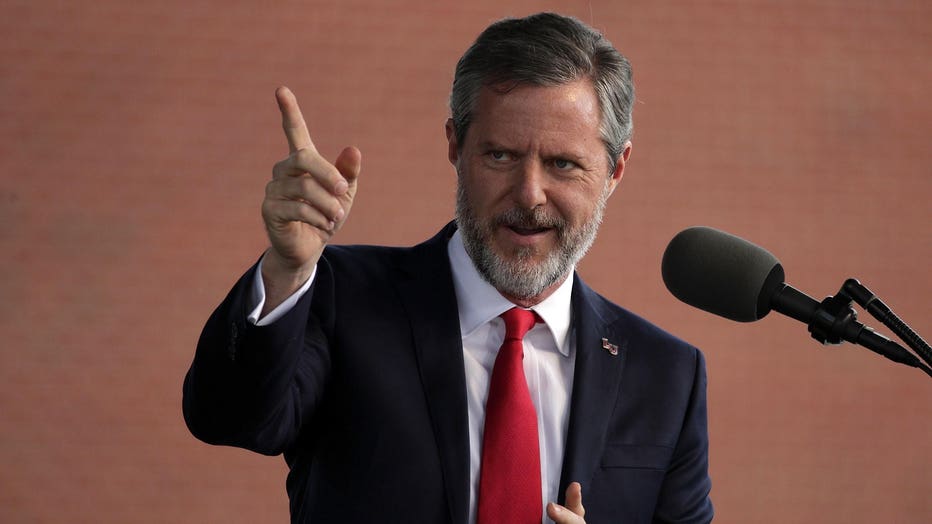 Jerry Falwell Jr. speaks during a commencement at Liberty University on May 13, 2017 in Lynchburg, Virginia. (Photo by Alex Wong/Getty Images)

Falwell had already been on leave since earlier this month after a photo he posted on social media caused an uproar. The latest controversy began to unfold late Sunday, when The Washington Examiner published a lengthy statement from Falwell disclosing that his wife had an extramarital affair. The statement, later shared with the AP, said the man involved had been threatening to reveal the relationship “to deliberately embarrass my wife, family, and Liberty University unless we agreed to pay him substantial monies.”

Falwell said he was seeking mental health counseling after dealing with fallout from the affair, which he said he had no role in.

“Over the course of the last few months ... we have decided the only way to stop this predatory behavior is to go public,” the statement said.

But on Monday, Reuters published Giancarlo Granda’s account of the relationship, including what the news agency said was an audio recording of a phone call between both the Falwells and Granda.

The tale of Granda’s ties to the family, previously reported in part by other news outlets, has become known as the “pool boy” story. Granda and the Falwells met while he worked as a pool attendant in Miami.

Granda, who did not return a call from AP on Tuesday, took on partial ownership of a hostel in Miami’s party-friendly South Beach neighborhood with members of the Falwell family, according to court documents. The purchase of the property was a surprise move in itself for the president of a conservative evangelical university. Granda’s later involvement sparked legal jostling that later involved Michael Cohen, Trump’s former lawyer and fixer.

Falwell started an indefinite leave of absence as president and chancellor on Aug. 7, after a photo he posted on social media sparked an uproar. The image showed him with his pants unzipped, stomach exposed and arm high around the waist of his wife’s pregnant assistant. Falwell has said the photo was taken at a costume party during a family vacation.

Critics of the photo said it was evidence of hypocritical behavior from the leader of a university where students must follow a strict code of conduct that includes modest dress and a ban on alcohol consumption and premarital sex. The photo also prompted new pushback against Falwell from school alumni and supporters, including North Carolina GOP Rep. Mark Walker, who called for his resignation.

Liberty alumni and Virginia pastor Colby Garman tweeted on Monday night that the events which brought Falwell down “are not the public fall of a Christian leader into sin.”

“They are the unmasking of a long-standing hypocrisy that has fed off the resources and goodwill of a Christian institution while despising the truths it was established to uphold,” Garman wrote.

The Rev. Jerry Falwell Sr. had aspired to make Liberty University an academic and athletic leader for evangelicals in the vein of the University of Notre Dame, an academic bastion for Roman Catholics. The younger Falwell’s success in shoring up the school’s finances after he took over in 2007 following his father’s death bolstered his standing among the school’s board members.

But as his propensity toward divisive public behavior grew — and particularly following his endorsement of Trump in early 2016 — a number of alumni and staff became dissatisfied with the university’s direction under Falwell.

Several of Falwell’s more incendiary recent public statements were connected to his political conservatism and his support for Trump. Falwell tweeted last year that Southern Baptist pastor David Platt should “grow a pair” after Platt acknowledged tension caused by Trump’s visit to his church. This summer, Falwell drew a public rebuke from 35 Black Liberty University alumni after responding to a mask mandate by Virginia’s Democratic governor, Ralph Northam, with a tweet invoking the blackface scandal that nearly forced Northam from office.

LeeQuan McLaurin resigned earlier this year as Liberty’s director of diversity retention and decried what he has described as the school’s disinterest in working toward racial equality and inclusion. Racism “has always been an issue for Liberty, and they have always ignored it because they knew that they could,” McLaurin said.

“However, they knew they could not simply ignore sexual immorality since that has been a longstanding value held by the church, and many of the donors of the institution,” McLaurin added.