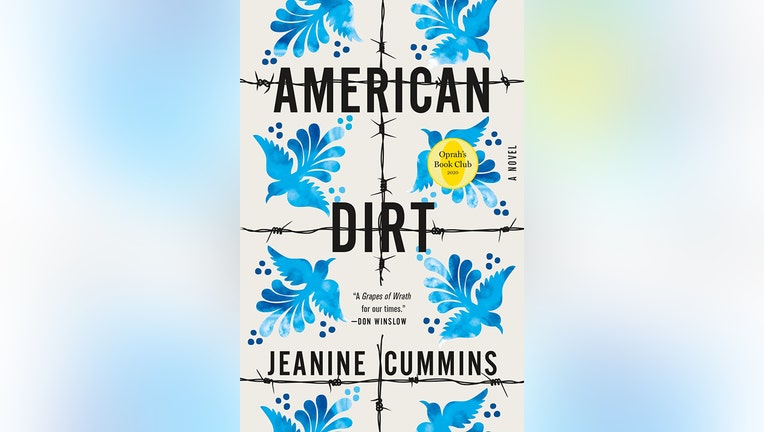 The cover of "American Dirt," a novel by Jeanine Cummins. (Flatiron Books)

NEW YORK (AP) - The publisher of Jeanine Cummins' controversial novel "American Dirt" has canceled the remainder of her promotional tour, citing concerns for her safety.

The novel about a Mexican mother and her young son fleeing to the U.S. border had been praised widely before its Jan. 21 release and was chosen by Oprah Winfrey for her book club. But Mexican American writers have been among those strongly criticizing "American Dirt" for stereotypical depictions of Mexicans. Cummins is of Irish and Puerto Rican background and had herself raised questions about the narrative, writing in an author's note at the end of the book that she had wondered if "someone slightly browner than me" should have done it.

"Jeanine Cummins spent five years of her life writing this book with the intent to shine a spotlight on tragedies facing immigrants," Bob Miller, president and publisher of Flatiron Books, said in a statement Wednesday. "We are saddened that a work of fiction that was well-intentioned has led to such vitriolic rancor.

"Unfortunately, our concerns about safety have led us to the difficult decision to cancel the book tour."

Flatiron Books is instead hoping to organize a series of town hall discussions.

Cummins, 45, had made a handful of promotional appearances since her book was released, but over the past few days, the St. Louis-based Left Bank Books had called off an event and Flatiron had canceled interviews in California. The tour for her heavily promoted book had been scheduled to last at least through mid-February, with planned stops everywhere from Seattle to Oxford, Mississippi.

Miller says that the town hall gatherings would include Cummins and her critics, calling it "an opportunity to come together and unearth difficult truths to help us move forward as a community." On Wednesday, a spokesperson for Winfrey confirmed that Winfrey will meet as planned with the author next month and that the discussion will air in March on Apple TV Plus. "American Dirt" was the third novel picked by Winfrey since she began a partnership with Apple last year.

Earlier Wednesday, dozens of authors, including Valeria Luiselli, Viet Thanh Nguyen and Tommy Orange, published an open letter to Winfrey that urged her to reconsider her selection of Cummins' novel.

"The book club provides a seal of approval that can still, we hope, be changed," they wrote. "Good intentions do not make good literature particularly not when the execution is so faulty, and the outcome so harmful."

Winfrey first chose "American Dirt" last fall, before any criticism had emerged and acknowledged in a pre-publication interview with the AP that she was unaware of any controversy. She has since posted a video on Instagram, saying that she had been following the debate and hoped for a broad discussion.

"I've spent the past few days listening to members of the Latinx community to get a greater understanding of their concerns, and I hear them. I do," Winfrey said in the video. "What I want to do is bring people together from all sides to talk about this book."

"American Dirt" has dramatized ongoing issues of diversity in publishing that mirror criticisms of Hollywood. From publishers and editors to booksellers and agents, the book industry is predominantly white. Miller acknowledged that the novel "exposed deep inadequacies" at Flatiron and apologized for how the novel was promoted.

"We should never have claimed that it was a novel that defined the migrant experience; we should not have said that Jeanine's husband was an undocumented immigrant while not specifying that he was from Ireland," he wrote. He also referred to a picture that surfaced on social media from a promotional dinner last May, when table centerpieces included barbed wire decorations based on the book's cover image.

"We can now see how insensitive those and other decisions were, and we regret them," Miller said.

Flatiron is a division of Macmillan and has had authors ranging from former Vice President Joe Biden to Winfrey, who also has her own imprint at Flatiron that is releasing an Alicia Keys memoir in March.

One of Cummins' leading detractors, Myriam Gurba, tweeted Wednesday that she, too, had security concerns. She wrote she had received death threats because of her criticisms and added "Let's talk about the SAFETY of MIGRANTS and LATINX ppl. That's what that book was intended to do, right?"

Cummins was defended by Ann Patchett, the author and bookstore owner who runs Parnassus Books in Nashville and gave the book an early blurb. In an email to The Associated Press, she wrote that Cummins had done a "beautiful job talking about the journey she's been on with this book," but that she understood the decision to end the tour.

"For the record, I loved 'American Dirt.' I've never in my life seen this kind of public flogging," she wrote.

Despite the criticism, Cummins' novel was easily the top-selling work of fiction last week, according to NPD BookScan, which tracks around 85 percent of the print market. "American Dirt" sold more than 48,000 copies during its first week, even topping Delia Owens' blockbuster "Where the Crawdads Sing," which sold just under 25,000 copies.