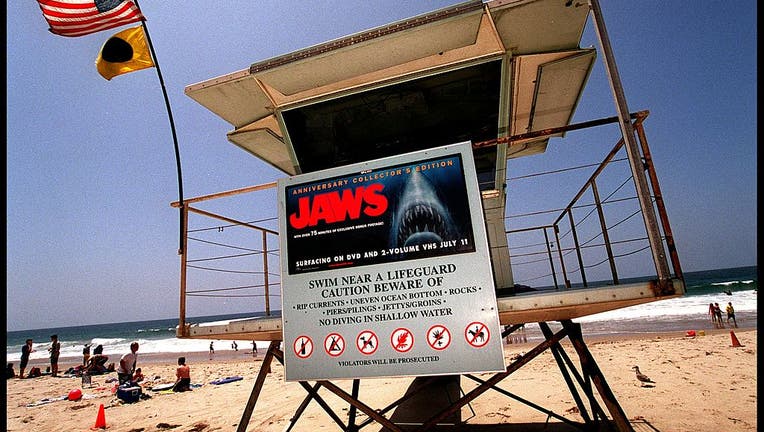 372132 02: A poster advertising the anniversary collector's edition of the movie "Jaws" is posted on a lifeguard tower July 2, 2000 on Zuma Beach in Malibu, CA. The sign has led to complaints by beach goers with young children, who feel that it is in

OAK BLUFFS, Mass. - A man who as a child had a brief but key role in "Jaws" has been named police chief on the Massachusetts island on which the 1975 movie was partially filmed.

"I’m clearly elated and and I’m humbled and honored to have been offered the position," Searle, currently a sergeant with Edgartown police, told the Vineyard Gazette, which first reported the appointment.

The movie centers on the efforts of a police chief in a fictional resort town trying to rid the local waters of a killer shark. Scenes were filmed in various locations on Martha's Vineyard.

A sneaky shark circled an alligator and nibbled on its foot while it was minding its own business near a dock in Hilton Head Island, South Carolina. (Credit: Cory Conlon via Storyful)

In the movie, Searle played one of two boys who send beachgoers into a panic by swimming around with a fake shark's fin.

Searle, whose father was police chief in Edgartown, takes over in Oak Bluffs next month.