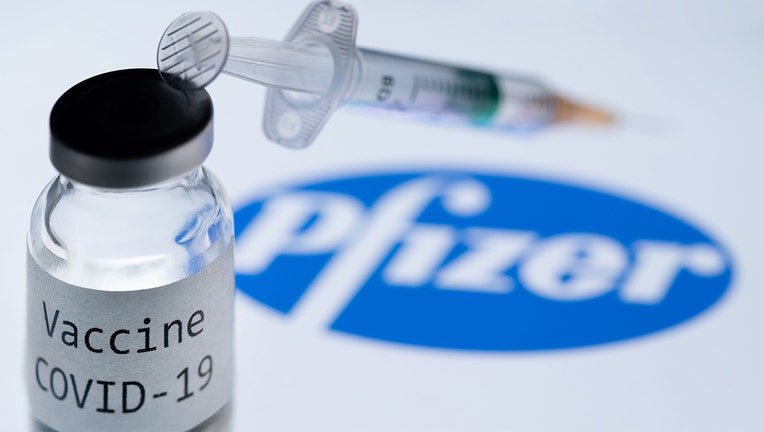 This illustration picture taken in Paris on November 23, 2020 shows a syringe and a bottle reading "Covid-19 Vaccine" next to the Pfizer company logo. (Photo by JOEL SAGET/AFP via Getty Images)

NEW YORK - People in Japan who received Pfizer Inc.'s COVID-19 vaccine seem to have suffered anaphylaxis at a higher rate than in the United States and Europe, the minister in charge of vaccination efforts said Wednesday.

"It's true, this seems to be more than in the United States and Europe," Taro Kono told a parliamentary committee.

The health ministry later said an additional eight cases of anaphylaxis, a severe and potentially fatal allergic reaction, were reported, bringing the total to 25 among around 148,000 health care workers who have been inoculated as of Wednesday.

Among those who suffered anaphylaxis, 24 were women. The first male case was reported the same day.

The rate compares with five cases in every 1 million doses administered in the United States and 20 cases per million in Britain, although Japan is further behind in its vaccine rollout and it could change as more people receive shots.

Japan is in the process of inoculating some 4.8 million health care workers nationwide before expanding to people aged 65 or older in mid-April. People with pre-existing conditions such as diabetes, and those working at elderly care facilities are slated to come next.

People who take the COVID-19 vaccine developed by Pfizer and its partner BioNTech SE are being asked to remain on site for at least 15 minutes to check for anaphylaxis and other side effects.

According to the Ministry of Health, Labor and Welfare, symptoms experienced within five to 30 minutes of receiving a shot include sore throat, hives and difficulty breathing. All of them recovered after receiving treatment.

Health minister Norihisa Tamura has said a ministry panel plans to review the matter on Friday, looking into whether the symptoms reported in Japan were as serious as those abroad.

Pfizer has said clinical trials showed its vaccine to be 95 percent effective in preventing symptoms of COVID-19, and Prime Minister Yoshihide Suga has called inoculations the "decisive factor" in bringing the pandemic under control.

WHAT ARE THE GUIDELINES FOR FULLY VACCINATED PEOPLE?

But only 63.1 percent of respondents in a Kyodo News poll conducted last month said they want to be vaccinated, with 27.4 percent saying they do not, apparently due to concerns over side effects.

Reported coronavirus cases in Japan had been falling since Suga declared a state of emergency in the Tokyo metropolitan area and other regions in January.

But the decline has bottomed out in recent weeks and the emergency declaration was extended until March 21 amid lingering worries of the strain on hospitals and the spread of more infectious variants of the virus.

"There is no question that the process to replace the existing strain has already begun," he told a parliamentary committee, stressing the need to step up efforts to monitor their spread.