Three Trump-era Justice Department officials recounted persistent badgering from the former president, including day after day of directives to chase baseless allegations that the election won by Democrat Joe Biden had been stolen.

WASHINGTON - Donald Trump hounded the Justice Department to pursue his false election fraud claims, striving in vain to enlist top law enforcement officials in his desperate bid to stay in power and relenting only when warned in the Oval Office of mass resignations, according to testimony Thursday to the House panel investigating the Jan. 6, 2021, Capitol riot.

Three Trump-era Justice Department officials recounted persistent badgering from the president, including day after day of directives to chase baseless allegations that the election won by Democrat Joe Biden had been stolen. They said they swept aside each demand from Trump because there was no evidence of widespread fraud, then banded together when the president weighed whether to replace the department's top lawyer with a lower-level official willing to help undo the results.

All the while, Republican loyalists in Congress trumpeted the president's claims — and several later sought pardons from the White House after the effort failed and the Capitol was breached in a day of violence, the committee revealed Thursday. 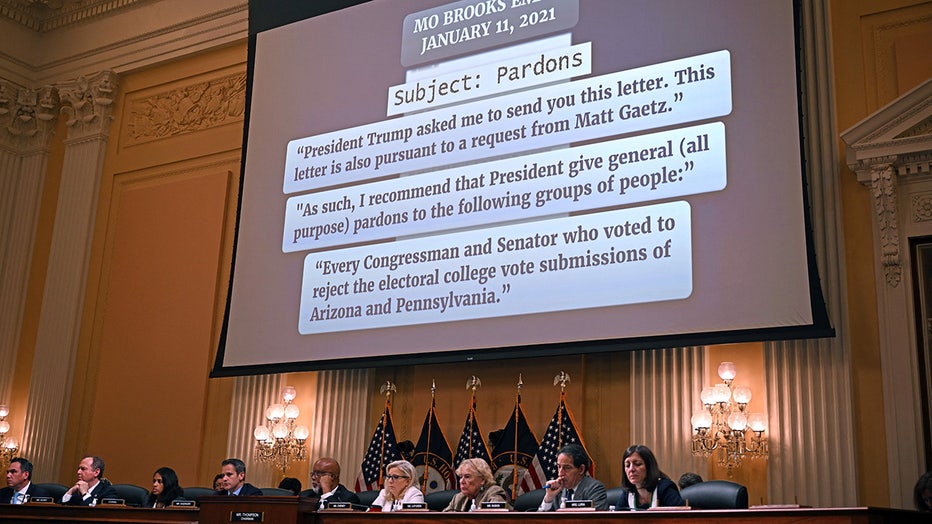 An email from US Representative Mo Brooks (R-AL) is shown on a screen during the fifth hearing by the House Select Committee to Investigate the January 6th Attack on the US Capitol in the Cannon House Office Building in Washington, DC, on June 23, 20

The hearing, the fifth by the panel probing the assault on the Capitol, made clear that Trump's sweeping pressure campaign targeted not only statewide election officials but also his own executive branch agencies. The witnesses solemnly described the constant contact from the president as an extraordinary breach of protocol, especially since the Justice Department has long cherished its independence from the White House and steered clear of partisan politics in investigative decisions.

"When you damage our fundamental institutions, it’s not easy to repair them," said Jeffrey Rosen, the acting attorney general in the final days of the Trump administration. "So I thought this was a really important issue, to try to make sure that the Justice Department was able to stay on the right course."

The hearing focused on a memorably tumultuous time at the department after the December 2020 departure of Attorney General William Barr, who drew Trump's ire with his public proclamation that there was no evidence of fraud that could have changed the election results. He was replaced by his top deputy, Rosen, who said that for a roughly two-week period after taking the job, he either met with or was called by Trump virtually every day. The common theme, he said, was "dissatisfaction that the Justice Department, in his view, had not done enough to investigate election fraud."

Trump presented the department with an "arsenal of allegations," none of them true, said Richard Donoghue, another top official who testified Thursday. Even so, Trump prodded the department at various points to seize voting machines, to appoint a special counsel to probe fraud claims and to simply declare the election corrupt.

The department did none of those things. 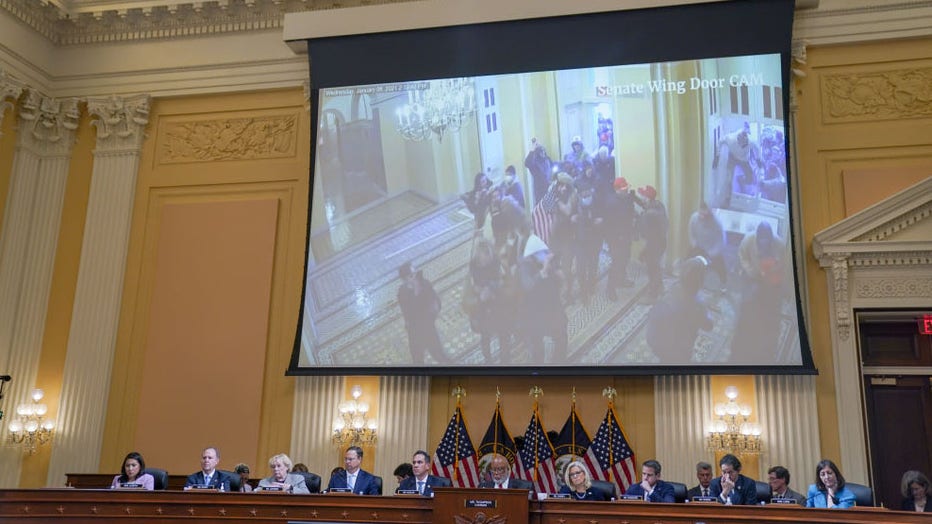 Video of people breaking into the Capitol during the Jan 6th riot are shown during a House Select Committee hearing on Thursday, June 16, 2022 in Washington, DC. (Kent Nishimura / Los Angeles Times via Getty Images)

"For the department to insert itself into the political process this way, I think would have had grave consequences for the country. It may very well have spiraled us into a constitutional crisis," Donoghue said.

The testimony showed that Trump did, however, find a willing ally inside the department, in the form of an environmental enforcement lawyer who'd become the leader of the agency's civil division. The attorney, Jeffrey Clark, had been introduced to Trump by a Republican congressman and postured himself as an eager advocate for election fraud claims. In a contentious Oval Office meeting on the night of Jan. 3, 2021, just three days before the insurrection, Trump even toyed with replacing Rosen with Clark but backed down amid threats of mass resignations.

Clark’s name was referenced often Thursday, with Rep. Adam Kinzinger, an Illinois Republican and committee member, deriding him as a lawyer whose sole qualification was his fealty to Trump and his willingness to do whatever the president wanted, "including overthrowing a free and fair democratic election." A lawyer for Clark did not return messages seeking comment.

Barely an hour before the hearing began, it was revealed that federal agents on Wednesday had searched Clark’s Virginia home, according to a person familiar with the matter. It was not clear what agents were seeking.

The latest hearing centered less on the violence at the Capitol than on the legal push by Trump to undo the election results, as the panel makes the case that the defeated president’s "big lie" over the election led to the insurrection. That included specific asks by Trump but also more general ones.

In one phone conversation, according to handwritten notes taken by Donoghue and highlighted at Thursday’s hearing, Trump directed Rosen to "Just say the election was corrupt and leave the rest to me and the R. Congressmen."

Around that time, Trump was connected by a Republican congressman, Rep. Scott Perry of Pennsylvania, to Clark, who’d joined the department in 2018 as its chief environmental lawyer and made it known that he would aid efforts to challenging the election results. At one point, Clark presented colleagues with a draft letter pushing Georgia officials to convene a special legislative session on the election results. Clark wanted the letter sent, but Justice Department superiors refused.

Clark was not among the hearing witnesses. He did appear in private before the committee, though lawmakers on Thursday played a videotaped deposition showing him repeatedly invoking his constitutional right against self-incrimination.

Perry’s name surfaced later in the hearing, when the committee played videotaped statements from Trump aides saying that he and several other Republican members of Congress sought pardons from the president that would shield them from criminal prosecution, the testimony revealed.

Perry and fellow GOP Reps. Andy Biggs of Arizona, Mo Brooks of Alabama, Matt Gaetz of Florida and Louie Gohmert of Texas were all involved in efforts to reject the electoral tally or submit "fake electors." Gaetz tweeted Thursday that the hearing was a "political sideshow," and Perry denied in a statement Thursday having ever sought a pardon.

The situation came to a head on Jan. 3, 2021, a Sunday, when Clark informed Rosen that Trump wanted to replace him with Clark as acting attorney general. Rosen, resisting the idea of being fired by a subordinate, testified that he swiftly contacted senior Justice Department officials to rally them together. He also requested a White House meeting, where he and his allies could make their case.

That night, he showed up at the White House for what would be a dramatic, hours-long meeting centered on whether Trump should proceed with plans for a radical leadership change. Clark was present, as were Donoghue and Steven Engel, a Rosen ally and senior Justice Department official who also testified Thursday.

At the start of the meeting, Rosen said, "The president turned to me and he said: ‘The one thing we know is you, Rosen, you aren’t going to do anything. You don’t even even agree with the claims of election fraud and this guy at least might do something’."

Donoghue made clear he'd resign if Trump fired Rosen. Trump asked Engel whether he would do the same. Engel responded that, absolutely, he would because he'd be left with no choice. The entire leadership team would resign, Trump was told. Hundreds of staffers would walk out too.

The president backed down. The night, and his Republican administration, ended with Rosen atop the Justice Department.

Donoghue also sought to dissuade Trump from believing Clark had the legal background to do as the president wanted.

"I said, ‘Mr. President, you’re talking about putting a man in that seat who has never tried a criminal case, who’s never conducted a criminal investigation. He’s telling you that he’s going to take charge of the department, 115,000 employees, including the entire FBI, and turn the place on a dime and conduct nationwide criminal investigations that will produce results in a matter of days,’" Donoghue said.

RELATED: The moments resonating from the Jan. 6 hearings (so far)