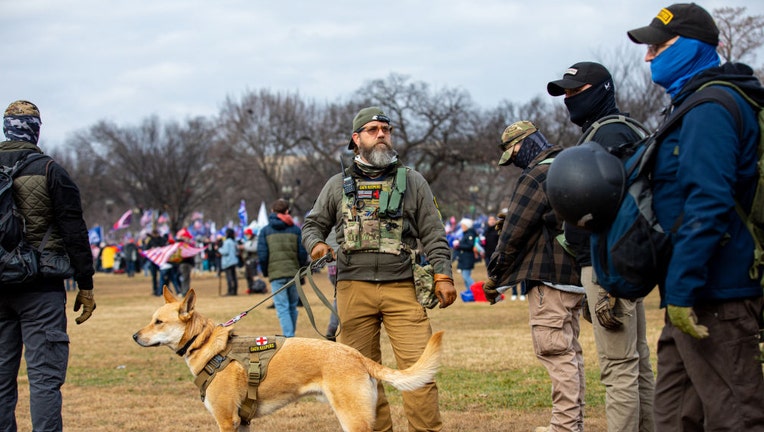 WASHINGTON - After securing seditious conspiracy convictions against two leaders of the Oath Keepers, the Justice Department will begin Monday to try to make its Capitol riot case against four others affiliated with the far-right extremist group.

Openings statements are expected in Washington's federal court less than two weeks after Stewart Rhodes, the founder of the Oath Keepers, and Kelly Meggs, who led its Florida chapter, were convicted of seditious conspiracy for what prosecutors described as a violent plot to overturn President Joe Biden's victory.

The defendants facing jurors in the latest trial are Joseph Hackett, of Sarasota, Florida; Roberto Minuta of Prosper, Texas; David Moerschel of Punta Gorda, Florida; and Edward Vallejo of Phoenix. They are charged with several other felonies in addition to seditious conspiracy.

While the Rhodes' and Meggs' verdicts were a major victory for the Justice Department, three of their co-defendants were acquitted of seditious conspiracy. The major question in the next trial is whether prosecutors will be convince jurors to convict lower-level defendants of the Civil War-era offense.

Seditious conspiracy can be difficult to prove, especially when the alleged plot is unsuccessful. Rhodes and Meggs were the first people in decades found guilty at trial of the charge, which carries up to 20 years in prison.

Thomas Caldwell, of Berryville Virginia; Jessica Watkins of Woodstock, Ohio; and Kenneth Harrelson of Titusville, Florida, were acquitted of sedition. But all five defendants in that case were convicted of obstructing Congress' certification of Biden's electoral win, which also calls for as many as 20 years behind bars.

Prosecutors will try to convince jurors that Minuta, Moerschel, Vallejo and Hackett plotted with Rhodes and others to use force to stop the transfer of presidential power from Donald Trump to Biden. Authorities say the plot came to a head on Jan. 6, 2021, when Oath Keepers stormed the Capitol alongside hundreds of other angry Trump supporters.

In Rhodes' case, prosecutors spent weeks arguing they were not whipped into an impulsive frenzy by Trump on Jan. 6 but came to Washington intent on keeping Trump in power at all costs.

Authorities say the Oath Keepers discussed their plans in encrypted chats for weeks before the riot and stashed weapons at a nearby Virginia hotel in case they were needed to support their plot.

But while investigators combed through thousands of messages sent by Rhodes and his co-defendants, none specifically spelled out a plan to attack the Capitol itself. Defense attorneys emphasized that fact throughout the trial to argue there was never any plot.

They said the Oath Keepers didn't come to Washington for violence but to provide security for people like Trump ally Roger Stone at events before the riot.

Authorities say Hackett and Moerschel were part of the first group of Oath Keepers along with Meggs and Watkins that pushed into the Capitol in military-style stack formation. Minuta later joined a second "stack" that forced its way inside as police desperately tried to defend the building, prosecutors say.

Vallejo is accused of helping coordinate the quick reaction force teams in Virginia that authorities say were ready to rush a cache of weapons into the capital city if necessary. The weapons were never deployed.

Prosecutors say that on the morning of the riot, Vallejo and another quick reaction force team member discussed the possibility of "guerrilla war" and "armed conflict."

"It’s a do or die situation. Because if we walk away from this, and we don’t have any effectual change as a result, then we might as well just give up. We’re done. We’re done. If we don’t do something now, we’re done," Vallejo said on the podcast, according to authorities.

Three other Oath Keepers have pleaded guilty to seditious conspiracy and agreed to cooperate with investigators in the hopes of getting a lighter sentence. But they were never called by prosecutors to the witness stand in Rhodes' case. It's unclear why prosecutors didn't have them testify and whether they might take the stand in the latest trial.

Another sedition trial is also expected to begin later this month against former Proud Boys national chairman Enrique Tarrio and other leaders of that extremist group.