Hours after Iran launched missiles into Iraq, two more rockets landed in Baghdad's Green Zone and exploded near the perimeter of the U.S. Embassy. Fox News reported that Iran-backed militias rather than the Iranian government fired those rockets. Although no one was hurt, the incident was a clear sign of lingering volatility in the region. Reported by Dan Bowens

TEHRAN, Iran - Iran is informing the United Nations that it took "a measured and proportionate military response" to the U.S. airstrike that killed its top military commander and "does not seek escalation or war."

Iran launched ballistic missiles at two bases in Iraq where U.S. troops are based in response to the U.S. killing of the top Iranian military commander Qassem Soleimani earlier this week.

But Iran's U.N. Ambassador Majid Takht Ravanchi warned that Tehran would "vigorously" respond to "any further military adventurism against it" and "any aggression."

Ravanchi said in a letter late Wednesday to the U.N. Security Council and to Secretary-General Antonio Guterres that in the early morning hours of Jan. 8, Iran "targeted an American air base in Iraq from which the cowardly armed attack against martyr (Qassem) Soleimani was launched."

Iran's state-owned TV network aired this footage of what the government said were missiles being launched from an undisclosed location in Iran at bases housing U.S. troops in Iraq on Jan. 8, 2020. (IRINN via APTN)

He said Iran was exercising its right to self-defense under Article 51 of the U.N. Charter.

"The operation was precise and targeted military objectives thus leaving no collateral damage to civilians assets in the area," Ravanchi said

Gen. Mark Milley, chairman of the Joint Chiefs of Staff, said he believes Iran's missile strikes were intended to kill Americans although none were killed or injured.

"I believe based on what I saw and what I know is that they were intended to cause structural damage, destroy vehicles and equipment and aircraft and to kill personnel," Milley said.

Milley said the fact that no one was killed was due to the defensive procedures and the effectiveness of the U.S. early warning system.

Hours after the missile attack, an "incoming" siren went off in Baghdad's Green Zone after what seemed to be small rockets "impacted" the diplomatic area, a Western official said. There were no reports of casualties. 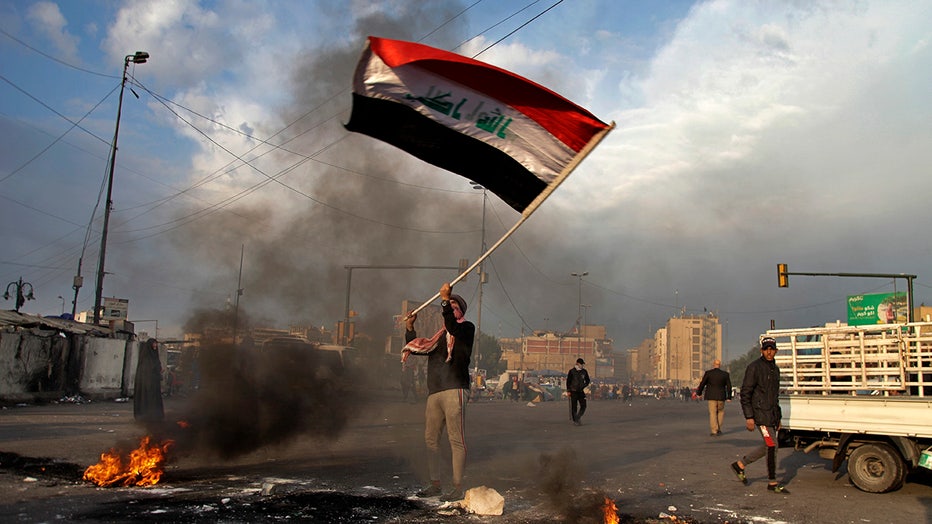 A protester waves the national flag while demonstrators set fire to close streets near Tahrir Square during a demonstration against the Iranian missile strike in Baghdad, Iraq, Jan. 8, 2020. (AP)