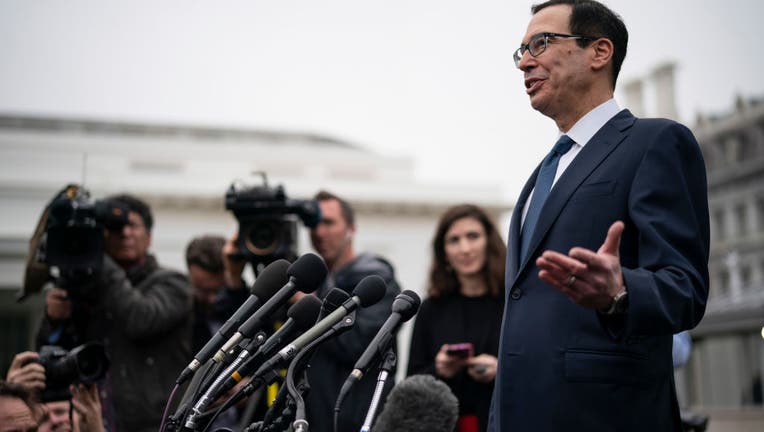 Treasury Secretary Steven Mnuchin speaks to the press outside of the West Wing of the White House on March 13, 2020 in Washington, DC. (Photo by Drew Angerer/Getty Images)

WASHINGTON (AP) - The income tax filing date has been pushed back from April 15, to July 15, Treasury Secretary Steven Mnuchin said.

Mnuchin announced the decision in a tweet Friday saying that at President Donald Trump’s direction “we are moving Tax Day from April 15 to July 15. All taxpayers and businesses will have this additional time to file and make payments without interest or penalties.”

Trump said that if people are expecting refunds, they should go ahead and file now so that they can get their refunds from the IRS more quickly. The delay is available to people who owe $1 million or less and corporations that owe $10 million or less.

The administration had announced earlier in the week that it would delay the payments, a move that Mnuchin said would leave $300 billion in the economy at a critical time.

However, the administration used authority to delay payments through Trump's national emergency declaration.

Misinformation about COVID-19 has spread far and fast online. To fight these myths and lies, the WHO created a series of

It is expected that many states will follow the lead of the federal government and delay their tax filing deadlines as well, but that will be a state-by-state decision.

Mnuchin had said the payment delay could provide $300 billion in temporary support to the economy by giving households and businesses the ability to use money they would have paid to the IRS as financial support to meet other needs during the economic emergency created by the efforts to contain the coronavirus.