Bodycam footage showing Dayton police officers dragging a paraplegic man out of his car has prompted an investigation into his arrest. (Credit: Dayton, Ohio - City Government)

DAYTON, Ohio - The arrest of an Ohio man is under investigation by the Dayton police department’s Professional Standards Bureau.

Clifford Owensby, who is a paraplegic, was forcibly dragged out of his car during a traffic stop on Sept. 30. The Dayton Police Department released bodycam footage that shows an officer grabbing a handful of Owensby’s hair while pulling him out of the car.

Police said they pulled Owensby over when they spotted his car leaving a suspected drug house. Once an officer identified him and saw a criminal record, he asked Owensby to step out of the car so a K-9 could conduct an "open-air sniff" test, police said.

Video shows Owensby phoning someone and asking them to come witness and record his encounter with police. Eventually, officers reach inside the car and pull Owensby out. 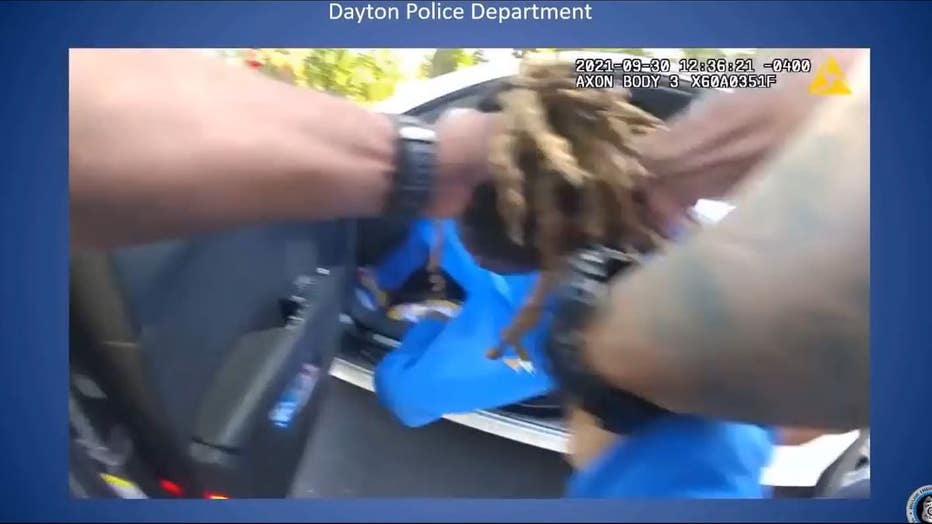 The Dayton Police Department released bodycam footage that shows an officer grabbing a handful of Clifford Owensby’s hair while pulling him out of the car. (Credit: Dayton, Ohio - City Government)

"I’m a paraplegic, bro," Owensby shouted as officers grabbed him. "You can hurt me."

Once on the ground, officers knelt on Owensby’s back as he screamed in pain. With a handful of hair, one of them can be seen pressing Owensby’s face to the pavement. 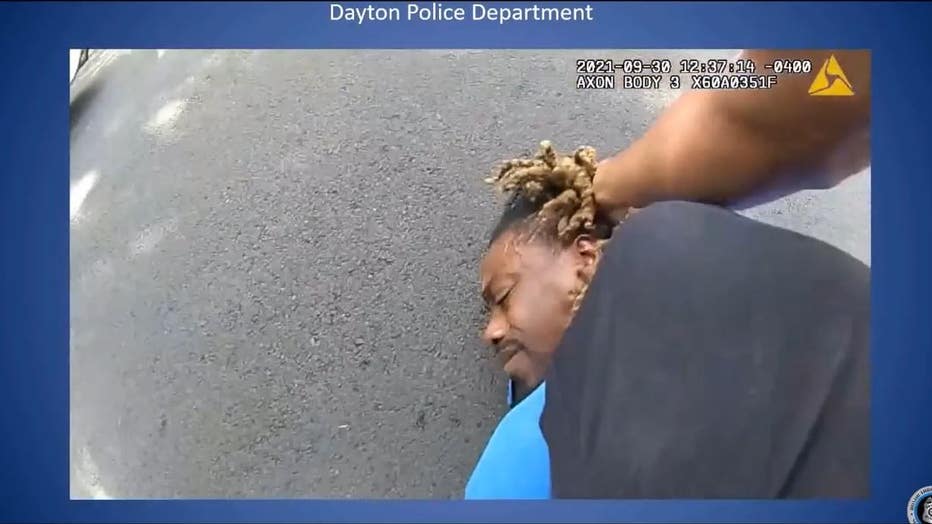 Once on the ground, officers knelt on Clifford Owensby’s back as he screamed in pain. With a handful of hair, one of then pressed his face to the pavement. (Credit: Dayton, Ohio - City Government)

In handcuffs, officers carried Owensby to the back of a patrol car. His legs dragged on the ground — causing his pants to fall to his ankles and expose his underwear along the way.

Owensby’s shoes also fell off during the arrest. Officers can be seen throwing them back into Owensby’s car.

Police said an unsecured toddler was also in the car until an officer removed the 3-year-old. Investigators said they also found a bag of cash worth $22,450, which the K-9 alerted on.

The police department’s Professional Standards Bureau launched an investigation into the incident the next day. Dayton’s Fraternal Order of Police (FOP) reviewed the case and sided with the officers, saying the officers "used the least amount of force to remove Mr. Owensby from the vehicle."

"The officers followed the law, their training, and departmental policies and procedures," the FOP said in a statement." Sometimes the arrest of noncompliant individuals is not pretty, but is a necessary part of law enforcement to maintain public safety, which is one of the fundamental ideologies of our society."

Even so, Dayton Mayor Nan Whaley called the video "concerning."

"No matter where you live or what you look like, everyone deserves to be treated with dignity and respect when dealing with Dayton Police," Whaley said in a statement to WOIO. "Immediately following this interaction, the City released the body camera footage and a full investigation is already underway. Dayton remains committed to our ongoing community-led police reform process and providing transparency in situations like this."

The case also caught the eye of prominent civil rights attorney Benjamin Crump, who advocated for Owensby on Twitter.

"Dayton PD pulled over Clifford Owensby & violently PULLED him out of the vehicle after learning that he was a paraplegic who couldn't use his legs," Crump tweeted. "Cops SHOULD treat citizens with respect. Instead, police had no regard for the wellbeing of this man. Unacceptable!"