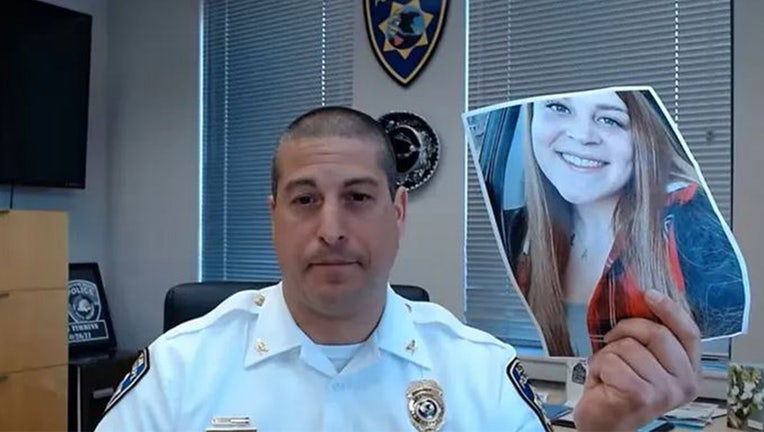 Alton Police Chief Marcos Pulido holds up an image of Liese Dodd, a 22-year-old pregnant woman who was found dead inside a home. (Alton Police Department)

Editor's note: Details of this story are disturbing.

The man accused of beheading a pregnant Illinois woman whom he dated on and off throughout the years has been arrested, police said Monday.

Deundrea S. Holloway, 22, has been charged with two counts each of first-degree murder and intentional homicide of an unborn child, along with dismemberment of a human body and other crimes, Alton, Illinois Police Chief Marcos Pulido said during a video in which he called Holloway a "monster" multiple times.

"She was savagely, savagely killed," he said while holding up a photo of 22-year-old Liese Dodd. "It’s beyond irreprehensible."

Dodd was found dead and her body decapitated inside her home by officers on June 9, the chief said. She was slated to give birth in July and her family was in the process of planning a baby shower for her at the end of the month.

Her head was found in a dumpster outside her apartment, according to court documents obtained by the St. Louis Post-Dispatch.

Dodd's mother went to check on her after not hearing from her and found her "in a way that you can't imagine," Pulido said.

"This daughter, this mother-to-be and her family were in the planning stages of a baby shower that was supposed to be at the end of June but now instead the family is planning a funeral because of what a monster did," Pulido said.

Dodd had dated Holloway on and off for about two years and had recently moved to the area, Fox 2 Now in St. Louis, Missouri reported.

"We offer our sympathy to the family of Liese Dodd for the profound loss they are suffering. We believe the evidence will show that the defendant’s gruesome actions here killed both a young woman and the child she carried in her womb," he said. "In the eyes of the law, both these killings are equal. And he will now face justice for both."