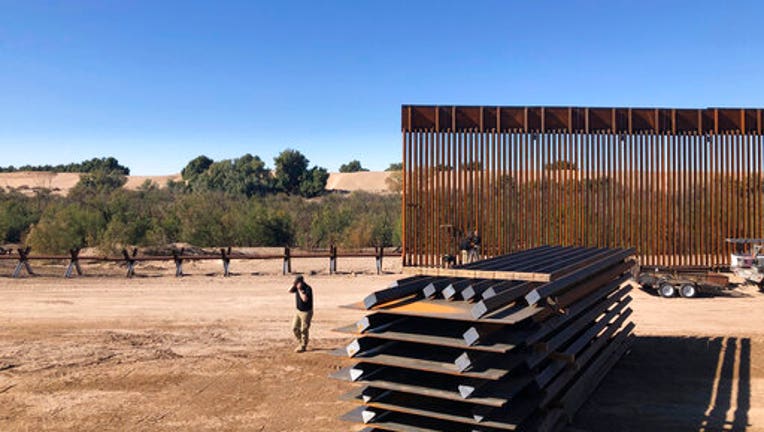 In this Jan. 10, 2020, photo, people work at a portion of border wall which is under construction in Yuma, Ariz. Illegal border crossings have plummeted as the Trump administration has extended a policy to make asylum seekers wait in Mexico for court

YUMA, Ariz. (AP) — Adolfo Cardenas smiles faintly at the memory of traveling with his 14-year-old son from Honduras to the U.S.-Mexico border in only nine days, riding buses and paying a smuggler $6,000 to ensure passage through highway checkpoints.

Father and son walked about 10 minutes in Arizona's stifling June heat before surrendering to border agents. Instead of being released with paperwork to appear in immigration court in Dallas, where Cardenas hopes to live with a cousin, they were bused more than an hour to wait in the Mexican border city of Mexicali.

“It was a surprise. I never imagined this would happen," Cardenas, 39, said while waiting at a Mexicali migrant shelter for his fifth court appearance in San Diego, on Jan. 24.

Illegal crossings plummeted across the border after the Trump administration made more asylum-seekers wait in Mexico for hearings in U.S. court. The drop has been most striking on the western Arizona border, a pancake-flat desert with a vast canal system from the Colorado River that turns bone-dry soil into fields of melons and wheat and orchards of dates and lemons.

Arrests in the Border Patrol's Yuma sector nearly hit 14,000 in May, when the policy to make asylum-seekers wait in Mexico took effect there. By October, they fell 94%, to less than 800, and have stayed there since, making Yuma the second-slowest of the agency's nine sectors on the Mexican border, just ahead of the perennially quiet Big Bend sector in Texas.

Illegal crossings in western Arizona have swung sharply before, and there are several reasons for the recent drop. But Anthony Porvaznik, chief of the Border Patrol's Yuma sector, said the so-called Migration Protection Protocols have been a huge deterrent, based on agents' interviews with people arrested.

In the neighboring Tucson sector, arrests rose each month from August to December, bucking a border-wide trend and making it the second-busiest corridor after Texas' Rio Grande Valley. Porvaznik attributes Tucson's spike to the absence of the policy there until three months ago.

In late November, the administration began busing asylum-seekers five hours from Tucson to El Paso, Texas, for court and delivering them to Mexican authorities there to wait. This month, officials scrapped the buses by returning migrants to Mexico near Tucson and requiring them to travel on their own to El Paso.

More than 55,000 asylum-seekers were returned to Mexico to wait for hearings through November, 10 months after the policy was introduced in San Diego.

The immigrants were from more than three dozen countries, and nearly 2 out of 3 were Guatemalan or Honduran, according to Syracuse University's Transactional Records Access Clearinghouse. Mexicans are exempt.

Critics say the policy is unfair and exposes asylum-seekers to extreme violence in Mexican border cities, where attorneys are difficult to find.

The American Civil Liberties Union and other groups asked to put the policy on hold during a legal challenge. The U.S. 9th Circuit Court of Appeals heard arguments Oct. 1 and has not indicated when it will decide.

On Tuesday, critics scored a partial victory in a separate lawsuit when a federal judge in San Diego said asylum-seekers who are being returned to Mexico from California must have access to hired attorneys before and during key interviews to determine if they can stay in the U.S. while their cases proceed.

Immigration judges hear cases in San Diego and El Paso, while other asylum-seekers report to tent camps in the Texas cities of Laredo and Brownsville, where they are connected to judges by video.

In Yuma, asylum-seekers are held in short-term cells until space opens up to be returned to Mexicali through a neighboring California sector. Those interviewed by The Associated Press waited up to a week in Yuma, though Border Patrol policy says people generally shouldn't be held more than 72 hours.

Volunteers visit Mexicali shelters to offer bus tickets or a two-hour ride to Tijuana, along with hotel rooms for the night before court appearances in San Diego.

Cardenas, who worked construction in the Honduran capital of Tegucigalpa, said he feels unsafe in Mexico and that it was impossible to escape gangs in Honduras. “They are in every corner,” he said.

Enma Florian of Guatemala, who crossed the border illegally with her 16- and 13-year-old sons near Yuma in August, doesn't know if she would stay in Mexico or return to Guatemala if denied asylum in the U.S. The grant rate for Guatemalan asylum-seekers was 14% for the 12-month period that ended Sept. 30, compared with 18% for Salvadorans, 13% for Hondurans and 11% for Mexicans.

“The dream was to reach the United States,” she said, holding out hope that she will settle with relatives in Maryland.

While illegal crossings have nosedived in Yuma, asylum-seekers still sign up on a waiting list to enter the U.S. at an official crossing in San Luis, Arizona. U.S. Customs and Border Protection calls the Mexican shelter that manages the list to say how many asylum claims it will process each day. The shelter estimates the wait at three to four months.

Angel Rodriguez, one of 143 Cubans on the shelter's waiting list of 1,484 people, has had bright moments in Mexico, including a beautiful Christmas meal. But the 51-year-old rarely goes outside and says being sent back to Mexico to wait for court dates would be dangerous.

“That's sending me to hell again,” said Rodriguez, who hopes to settle with friends in Dallas or Miami. “If I'm going to seek asylum, I'm going to look to a country that is the safest and respects human rights. That country is the United States of America."