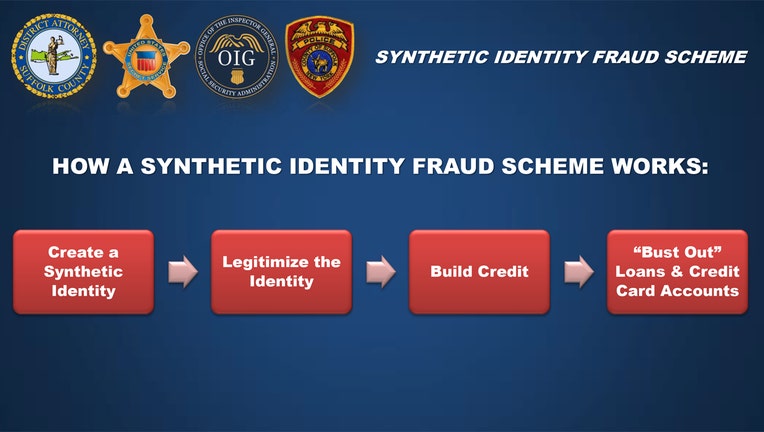 NEW YORK - More than a dozen people and three companies are accused of using fake identities to run a nationwide financial scam that pulled in more than $1 million, authorities on Long Island announced Wednesday.

The alleged scammers created what authorities call "synthetic identities," which are stolen Social Security numbers linked to new names, addresses, and dates of birth. The stolen SSNs belonged to people who either don't have a credit history or aren't likely to be monitoring their credit reports, such as children, recent immigrants, senior citizens, incarcerated people, and the dead, officials said.

The alleged scammers worked to make the fake identities real by applying for phone accounts, email accounts, rewards card accounts, library cards, and other types of accounts that don't require a lot of verification, according to Suffolk County District Attorney Timothy. The scheme also involved creating shell companies that bolstered the credit history of the fake identities by falsely reporting them as good customers to Equifax, Experian, and TransUnion, the three major credit reporting agencies, according to the DA.

Once these so-called synthetic identities built a decent credit history, the scammers then fraudulently took out loans and signed up for credit cards, eventually draining more than $1 million from several financial institutions, authorities said.

"This is an extremely complex crime and it can be very difficult to identify the perpetrators, but the team who is investigating and prosecuting this case meticulously followed the evidence and unraveled this scheme, which has far-reaching impacts on everyday citizens," Sini said in a statement. "We will seek justice for all of the victims – both the financial institutions that have been defrauded and the individual victims whose identities were stolen by these criminals."

An indictment unsealed this week lobs 108 counts against 13 people and three companies, Sini said. Authorities said that two of the people named in the indictment are on the run and "are being actively pursued by law enforcement."

"The investigation revealed evidence that the defendants allegedly created and used more than 20 synthetic identities in Suffolk County to fraudulently obtain loans and credit card accounts from 19 different financial institutions," the DA's office said. "The accounts were allegedly used by several of the defendants to the maximum amount allowed and then the balances on the accounts were never paid, a scheme commonly known as a credit 'bust out.'"