Footage of the aftermath shows a number of homes with significant structural damage in Mullica Hill after a tornado ripped through a community.

PHILADELPHIA - A massive and powerful storm system that once formed Hurricane Ida rumbled across parts of southern New Jersey on Wednesday night and produced a devastating tornado that completely destroyed several homes in Mullica Hill.

The National Weather Service storm survey team has completed an preliminary report on the tornado. The preliminary rating was an EF-3 with estimated maximum winds of 150 mph.

Footage of the aftermath shows a number of homes with significant structural damage, including one residence on Josephine Lane that was reduced to a pile of rubble. The study facades and large roofs on many surrounding homes were torn off and scattered in pieces across the lawn.

Miraculously, no serious injuries were reported in the wake of the storm thus far.

Gov. Phil Murphy, who toured the devastation on Thursday morning, declared a State of Emergency last night to ensure that New Jersey would have ample resources to aid people affected by the storm. Murphy, President Biden and FEMA Administrator Deanne Criswell are working on a Disaster Declaration request.

"We're going to stay here and be by the side of the residents and small businesses that have been impacted so severely," Murphy said. "I promise that we will stay with everybody and it won't be a short road but we will stay with them on that road to recovery."

Word of a tornado around Mullica Hill and Deptford started just before 7 p.m. Wednesday night. Soon after, videos shared to social media began to show the scope of the evolving situation in the normally quiet Gloucester County town.

Ryan Thoden wisely pulled over on the road when he spotted the large tornado as tore past in the distance. Robyn Murray, a neighbor in Mullica Hill, shot a video that purports to show the tornado closing in on her home.

"It's devastating, I know all these people, these are my neighbors, my heart breaks for them," Colleen Boggs said. "I can't even take this in right now, it's absolutely devastating." 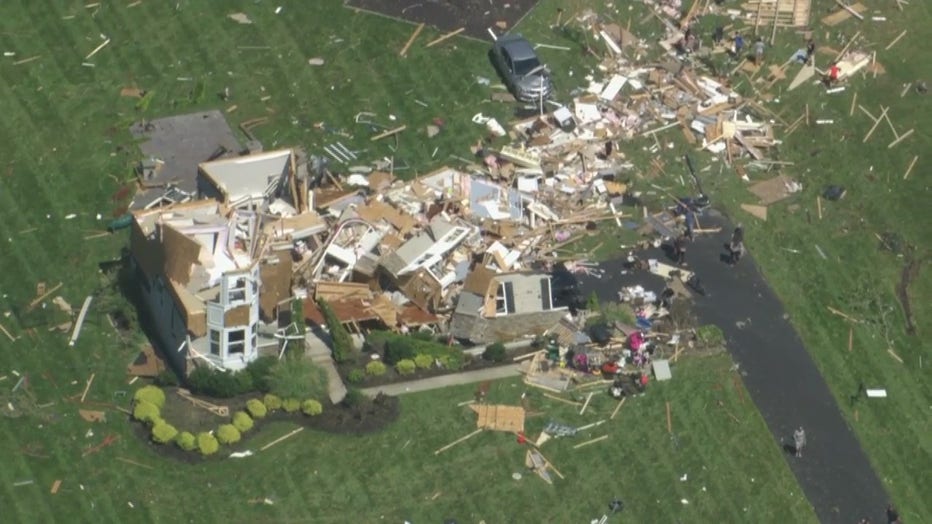 A home was reduced to a pile of rubble during Wednesday's tornado in Mullica Hill, New Jersey.

The weather service outlined several areas they will be investigating for tornadic activity and damage, including spots in Camden and Salem counties.

Further north, crews will survey damage in Burlington County where there were reports of a tornado on the ground near the Burlington Bristol bridge Thursday afternoon.