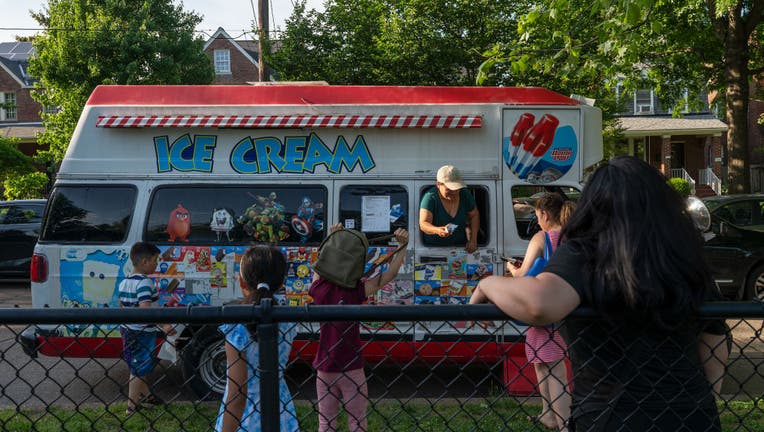 FILE IMAGE - People buy ice cream from an ice cream truck in Washington, D.C. on May 19, 2022. (Photo by Craig Hudson for The Washington Post via Getty Images)

Ice cream trucks — known for their novelty popsicles and iconic tunes — aren't a thing of the past, but the days of sitting at street corners may be long gone, according to one expert.

Although inflation — which surged 9.1% in June — is driving up costs of supplies and fuel for these ice cream drivers, it's not their only problem.

KLONDIKE DISCONTINUES CHOCO TACO AFTER NEARLY 4 DECADES ON THE MARKET

With the proliferation of food trucks, ghost kitchens and even third-party delivery services, "the humble ice cream van" is fighting for sales in a much more crowded marketplace, according to Christensen.

While trucks have the ability to go anywhere, their menu is limited compared to ice cream shops which typically offer a variety of items including shakes, floats and sundaes, Christensen said.

Additionally, third-party delivery services like Uber Eats and DoorDash also started providing ice cream products to people's homes more prolifically than ever before, especially during the early days of the coronavirus pandemic, which changed the way consumers consume ice cream, he added.

A lot of newcomers are also testing out ghost kitchens where they make the product in-house and do all of their advertising and marketing on social media, Christensen said.

INSTACART SEARCHES FOR CHOCO TACO UP 30,000% AFTER KLONDIKE DISCONTINUES DESSERT

According to the International Dairy Foods Association (IDFA), most consumers, about 84%, still prefer getting their ice cream from grocery stores and eat it at home.

The crowded marketplace has pushed these ice cream owners to be a little more creative in how they garner sales, he added.

"Driving the streets and setting up on a corner isn't enough anymore," Christensen said, adding that many trucks are now setting up at hospitals, on office blocks and at various events to capitalize on larger crowds.

Driving the streets and setting up on a corner isn't enough anymore.

Jason Mandler, the owner of Carmen's Italian Ice in Maryland, has two brick-and-mortar stores along with two ice cream trucks and catering vehicles. Over 20 years ago, Mandler started out driving around to pools, neighborhoods and some events. However, over time, he's transitioned to catering to larger events, festivals, corporate events and even open houses.

Mandler says he has become very active on social media, which is "essential for today's customers," and has even rebranded his trucks and carts for certain corporate client events like movie premiers or sporting events.

As a dessert truck, Mandler says they also often partner with other food trucks when seeking out events to go to.

Ice cream for breakfast: How a blizzard inspired a beloved holiday

Still, it hasn't been easy.

Ryan Miller, the owner of Betsy's Ice Cream in Mt. Lebanon, Pennsylvania, which is just outside of Pittsburgh, told FOX Business that he purchased an old Good Humor truck when the pandemic first hit to offset the loss of foot traffic in his store.

However, "it's been far from a banner year," Miller said. "In addition to the inflationary pressures that have taken a bite out of our margins and forced us to raise prices, staffing has continued to be a problem."

To try and stay afloat, Miller has been utilizing his truck for private parties and school events when it's not going around the suburbs of Pittsburgh.

"They're going into neighborhoods and stuff in between parties," he said. "We're kind of building a schedule around that as opposed to just blindly…sending someone out."