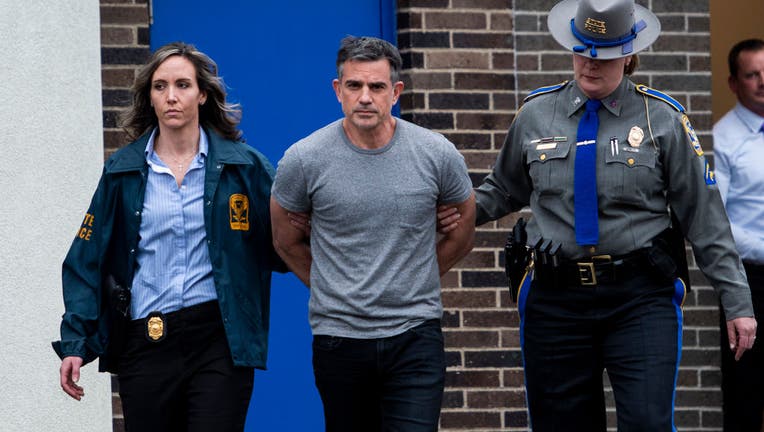 Fotis Dulos is escorted out of the Troop G State Police station before being placed in a cruiser Tuesday afternoon, Jan. 7, 2020. Dulos was arrested and charged with the murder of his estranged wife, Jennifer Farber Dulos, who has been missing since

NEW YORK - The estranged husband of a missing Connecticut mother of five who is presumed dead violated the terms of his release on $6 million bond because he was seen removing items from a memorial for his wife set up near his home, according to a state prosecutor.

The prosecutor filed a court document Wednesday asking a judge to modify the $6 million bond for Fotis Dulos.

Stamford State’s Attorney Richard Colangelo said Dulos was seen stopping at the end of his private street, leaving his vehicle and removing items from the memorial arranged in honor of Jennifer Dulos on Jan. 17, the Hartford Courant reported.

Dulos, 52, was arrested on murder and kidnapping charges on Jan. 7 in connection with what authorities say was the killing of Jennifer Dulos, who hasn't been seen since she dropped her children off at school May 24. Authorities cited circumstantial evidence, including DNA testing and surveillance camera footage, in arrest warrants. He denies any involvement in her disappearance or death.

Dulos posted $6 million bail on Jan. 9 and has been on house arrest since.

The terms of the release allow him to meet with his lawyers or go to a doctor and seek modifications allowing him to work. He has been seen at a local Stop & Shop not far from his home on two occasions that he apparently had permission to visit, the newspaper reported.

On various occasions there have been photos of Jennifer Dulos, along flowers and candles, left at the makeshift memorial. On Wednesday evening, it appeared the memorial was completely gone.

“He got out of his car on the way home? Seriously?" Pattis said Wednesday. "We need to get this trial on as quickly as possible to put an end to this nonsense.”

Fotis Dulos' former girlfriend, Michelle Troconis, was charged with conspiracy to commit murder. She is also under the same house arrest and GPS monitoring conditions.

Dulos was scheduled to appear in Stamford court Thursday, where he was expected to waive his right to a probable cause hearing and ask for a speedy trial that could start as early as next fall.