Laura made landfall near Lake Charles, Louisiana with winds of 150 mph with a minimum central pressure of 938 mb.

Tens of thousands were without power as howling winds and sheets of rain from the hurricane pummeled the Louisiana and Texas coasts.

As of early Thursday morning, nearly 200,000 customers in Louisiana and over 52,000 in Texas were without power according to poweroutage.us. 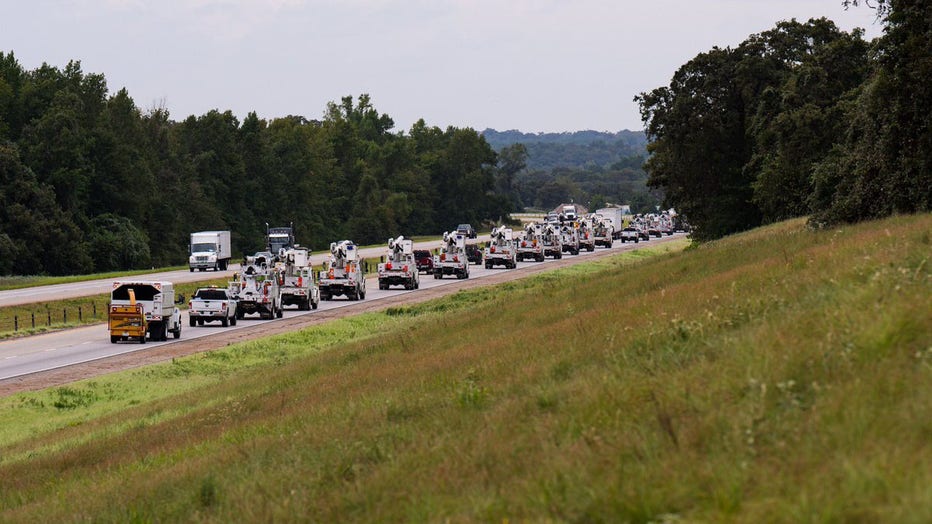 Laura, a potentially life-threatening hurricane, has raised fears of a 20-foot storm surge that forecasters said would be “unsurvivable” and capable of inundating entire communities.

Video and photos on social media showed torrents of rain flying sideways past street lights in Lake Charles, and streets covered with water closer to the coast. A sudden storm surge knocked over cameras meant to capture the hurricane’s effects.

In this video, sheets of rain can be seen being blown across the streets in Lake Charles, north of Cameron, during the storm. (Credit: Jeanne Adair via Storyful)

With hours of violent weather ahead, officials said the extent of destruction likely wouldn't be clear until daybreak, when search and rescue missions will begin.

The storm grew nearly 87% in power in just 24 hours to a size the National Hurricane Center called “extremely dangerous.”

“It looks like it’s in full beast mode, which is not what you want to see if you’re in its way," University of Miami hurricane researcher Brian McNoldy said.

As of Wednesday night, Hurricane Laura was a Category 4, packing winds at 150 mph, which is just short of Category 5 strength (157+ mph).

Meteorologists across the country had said there were increasing signs that Hurricane Laura could reach Category 5 strength before making landfall, but it maintained its Category 4 status as it slammed into the Louisiana coast.

What are the threats from Laura?

A catastrophic storm surge will impact the region and a threat of flooding rain will extend well inland.

Cline said 15 to 20 feet of storm surge will be possible with Hurricane Laura.

According to the National Hurricane Center, storm surge could move 40 miles inland from the coast in southwest Louisiana and southeast Texas.

RELATED: Houston-area closures and cancellations due to Hurricane Laura

The National Weather Service issued an Extreme Wind Warning prior to the landfall of Hurricane Laura. "Winds will increase rapidly soon as the northern eyewall moves onshore," NWS wrote.

Rainfall amounts between 6-10 inches will be possible with the system, with potential localized rainfall totals around 10-15 inches.

Showers are likely to persist through the weekend, as the system weakens and moves across the United States.

Laura is expected to dump massive rainfall as it moves inland, causing widespread flash flooding in states far from the coast.

Flood watches were issued for much of Arkansas, and forecasters said heavy rainfall could arrive by Friday in parts of Missouri, Tennessee and Kentucky.

Laura is so powerful that it's expected to become a tropical storm again once it reaches the Atlantic Ocean, potentially menacing the Northeast.

Where is Laura headed?

Drawing energy from the warm Gulf of Mexico waters, the system was on track to arrive near midnight CDT— late Wednesday or early Thursday — as the most powerful hurricane to strike the U.S. so far this year.

Early Wednesday, outer rain bands from Laura and wind gusts were already sweeping into sections of Louisiana as the storm continued to churn inland from the gulf. One major Louisiana highway already had standing water as Laura's outer bands moved ashore.

As of early Thursday morning CT, Laura made landfall and was moving north at 15 mph.

Models predict this system will continue its trajectory northward through Thursday before curling to the east and moving toward the East Coast.

Laura is expected to spread rain and wind inland through Arkansas and then through parts of the lower Mississippi Valley and Ohio Valley into Saturday.

Hurricane Laura is projected to finally move toward the East coast near northern Virgina and Washington D.C. before heading back out into the Atlantic Ocean.

Evacuations are currently in place

The Vermilion Parish Sheriff’s Office issued a grim warning to residents choosing to ride out Hurricane Laura rather than evacuate.

“Please evacuate and if you choose to stay and we can’t get to you, write your name, address, social security number and next of kin and put it a ziplock bag in your pocket. Praying that it does not come to this,” the post stated. “Expecting the worse buy praying for the best.”

A storm surge warning was in effect from Freeport, Texas to the Mississippi River in southeast Louisiana.

NOAA's Storm Prediction Center has issued a tornado watch until 8 a.m. CT Thursday for parts of Louisiana and southeastern Texas.

Authorities implored coastal residents of Texas and Louisiana to evacuate.

“Heed the advice of your local authorities. If they tell you to go, go! Your life depends on it today,” said Cline. “It’s a serious day and you need to listen to them.”

In the largest U.S. evacuation during this pandemic era, more than half a million people were ordered to flee from their homes near the Texas-Louisiana state line, including the Texas cities of Beaumont, Galveston and Port Arthur, and the low-lying Calcasieu and Cameron parishes in southwestern Louisiana, where forecasters said storm surge topped by waves could submerge entire towns.